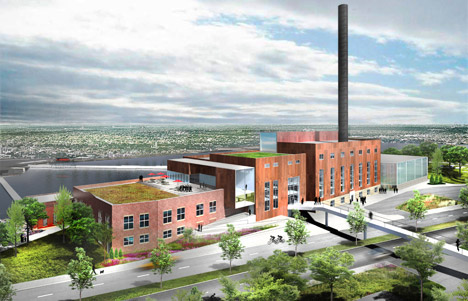 Beloit College has asked Studio Gang to develop the site between the institution’s existing campus and the riverfront of Beloit, located close to the state border with Illinois.

The decommissioned coal-burning power plant will be overhauled to include both educational and recreational spaces for students, including a coffee shop, lounges, a conference centre, a lecture hall and a theatre.

Set to complete in 2018, the building will also house a three-lane running track, an eight-lane competition swimming pool with space for 250 spectators, a 900-square-metre fitness centre, and a 1,500-square-metre recreational gym.

“We’re excited to work with Beloit College to transform an outmoded source of electricity into a wellspring of human energy,” said studio founder Jeanne Gang. “Our hope is that by reclaiming the Beloit waterfront for people, our project will inspire other communities around the globe to see human well-being as vitally interconnected with a healthy and clean environment.”

Studio Gang plans to retain the original brickwork and tiles of the former industrial structure, while incorporating a new “isothermal envelope” to provide heating.

This system will transfer kinetic energy from the river to a network of pipes beneath the external skin, keeping the building at a constant temperature all year round.

The coal bunkers and steel tubing of the 1940s Blackhawk Generating Station will also be kept in place, with the suspended running track weaving together the different structures of the plant.

A bridge will connect the new Powerhouse site to the existing campus, linking the college and the town to the Rock River.

Many proposals were put forward for the regeneration of the iconic structure and surrounding area, including a football stadium and a theme park, before its current owners chose architect Rafael Viñoly to masterplan the site. It is now set to include a shopping centre, hotels, offices and an arts space, as well as residential buildings by Foster + Partners and Frank Gehry.

A power plant further down the River Thames now houses the Tate Modern art gallery designed by Swiss studio Herzog & de Meuron, which has also designed a new extension to the building set to open in 2016.