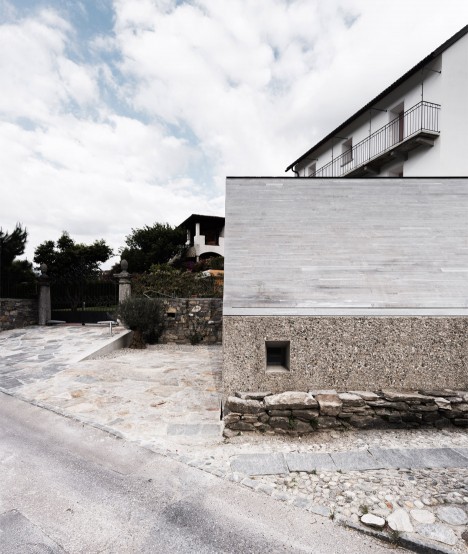 A year after transforming an old house into a gallery at the foot of the Swiss Alps, architect Matteo Inches has extended the building with a new concrete and granite gallery (+ slideshow).

Studio Inches was approached in 2012 by the 80-year-old daughter of late Swiss artist and archaeologist Aldo Crivelli to create the MeCri Museum, which occupies a converted 19th-century building in Minusio, close to the Swiss-Italian border.

Completed at the end of 2014, it exhibits Crivelli’s drawings and paintings, as well as the work of other local artists.

Inches has now extended the building by adding an extra gallery. Together, the two buildings frame a courtyard – a space that could also be used for exhibitions.

Described by Inches as a “dialogue between materiality and modern architectonical expression”, the new building has rough granite walls and a steeply angled concrete roof.

These materials are intended to complement the whitewashed stone walls of the old house, as well as the more rustic aesthetic of other buildings in the Alpine village.

The gallery’s windows are deliberately small, creating more flexibility for hanging artworks inside.

But a skylight runs the length of the gabled roof to allow light to gently filter in from above.

“The roof was done in concrete, waterproofed with resin and then clad with a local stone, Maggia Granite,” Inches told Dezeen.

“The monolithic mass is strengthened by the use of local stone granite as a cladding,” he said.

“The nine-metre skylight crowns the top of the roof and creates a mystic atmosphere in the interior.”

As well as the new gallery, Inches added new walls around the site.

These were built using a concrete aggregate, continuing the rough texture of the granite surfaces.

“As the old stone walls degrade through time, the new concrete boundaries will stand in their place,” said Inches.

“The concrete was washed in order to create a finishing that integrates with the context.”

Studio Inches is based in Locarno, southern Switzerland.

Other recent projects by the office include the conversion of a farmhouse into a home for a Swiss town mayor and the renovation of a house for an elderly couple.