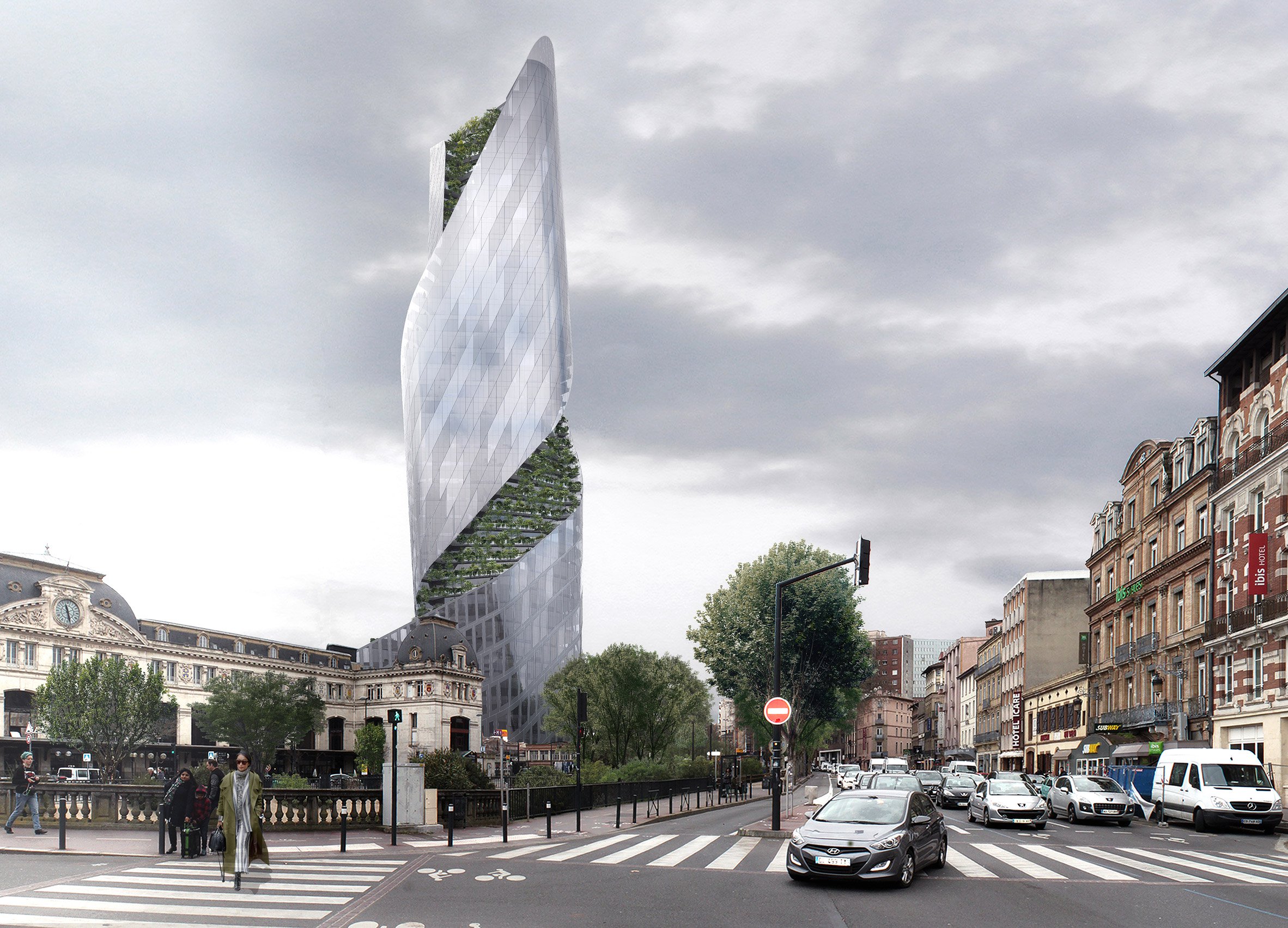 American architect Daniel Libeskind‘s firm has been selected to create a 150-metre-high tower covered in trees and plants in the heart of Toulouse‘s business district.

Studio Libeskind designed the Occitanie Tower for property developer Compagnie de Phalsbourg, which unveiled the project at the MIPIM real-estate event in Cannes earlier this month.

The so-called garden tower is expected to become the first skyscraper in the French city, with a proposed height of 40 storeys.

The “continuous vertical landscape” of the facade and tree-lined public platform contrasts from Libeskind’s signature angular forms – showcased on projects like the Dresden Museum of Military History and his 2001 Serpentine Pavilion.

The building will also feature a twisting shape that references the waterways of the Canal du Midi, which winds through the the city.

“With its suspended gardens that change colour during the seasons, the slight silvertine of the glazing of the facade will reflect the pink tones of Toulouse and the brightness of this material will change perception of the space, according to the variation of light,” said Libeskind.

“The tower becomes a unique object in a vast urban space – the tower will not only become a destination, but also a defining public space.”

The Occitanie Tower will include 120 apartments, a Hilton Hotel, commercial space for shops and a restaurant with panoramic views. It will also contain 11,000 square metres of office space, housing railway company SNCF on its ground floor.

The tower will be built on the site of the former postal sorting centre at Gare Matabiau. Situated east of the city centre and away from the Garonne River, the building will have views of the Pyrenees, less than 100 kilometres away.

Compagnie de Phalsbourg’s CEO Philippe Journo said the project asserting itself as a new business hub in the region.

“The Occitanie Tower will create both an iconic landmark for the city as well as create a strategic economic generator for the district,” he stated.

Studio Libeskind will collaborate with Toulouse architect Francis Cardete on the project. Construction is slated for 2018, to be completed by 2022.

Libeskind’s design for a mixed-used commercial centre connected to Thiers train station in Nice was also announced at MIPIM, which took place from 13 to 16 March 2017.

In an Opinion column for Dezeen about the annual property fair, Sam Jacob said that exhibitors need to come up with far more extreme fictions in order to “speak cities into existence”.

Other recent projects from Studio Libeskind include a larch-clad cosmology centre for Durham University, England, completed in March 2017.