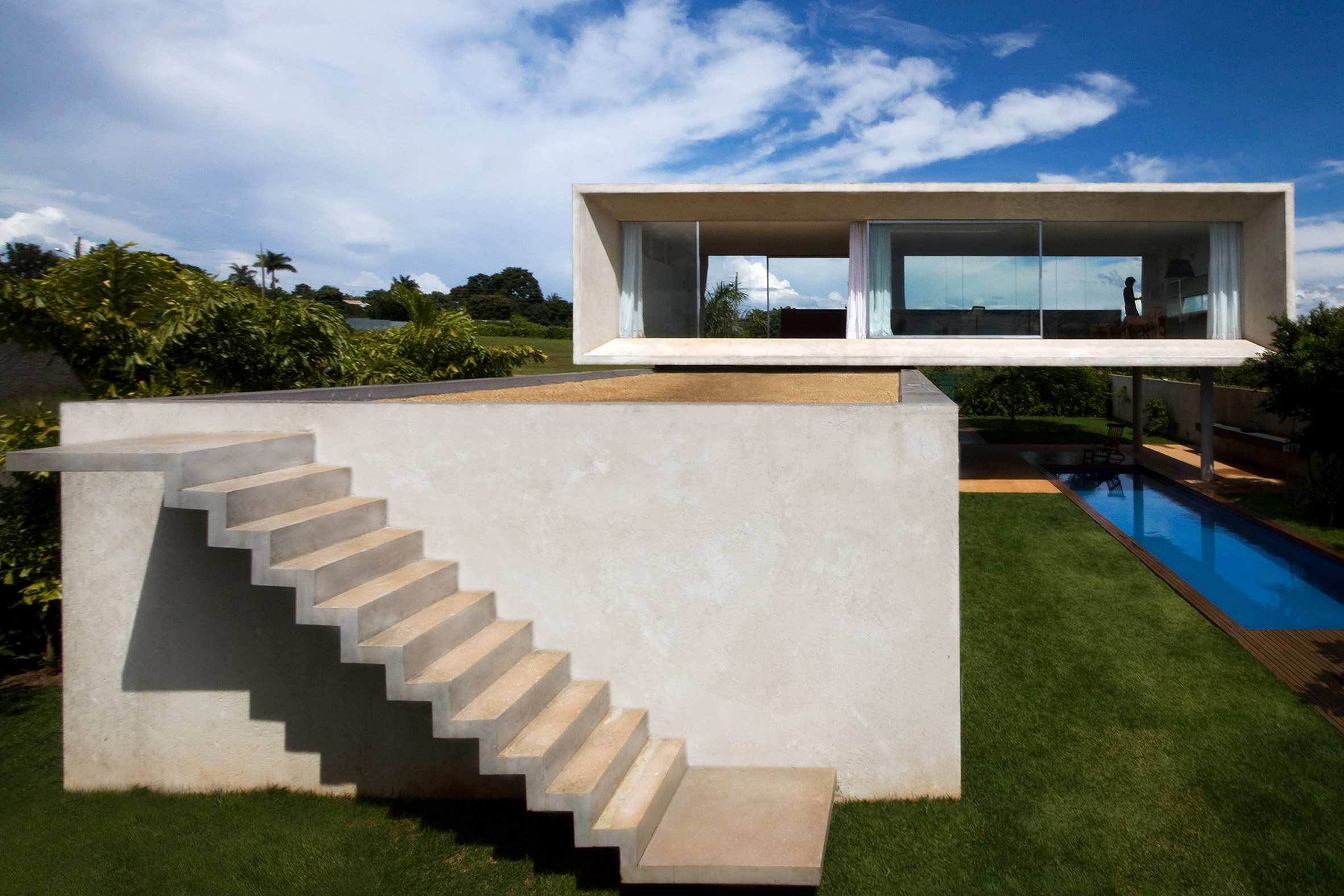 Brazilian studio Studio MK27 has rotated the top volume of this concrete house in Brasília so it extends out over a narrow swimming pool to rest on a pair of stilts.

Osler House is located at top of one of the Paranoá Lake estuaries in Brazil’s capital, which was masterplanned in 1958 by famous modernist architects Lucio Costa and Oscar Niemeyer.

This prompted Studio MK27 to design the residence as a contemporary update of the style. It draws on key features, with two boxy concrete volumes placed at right angles and pilotis raising the upper volume above ground.

“The house is a poetic commentary on modern architecture, above all on Brazilian modernism, starting from a contemporary re-reading of the building materials and techniques,” Studio MK27 explained.

Other nods to the 20th-century style include the large expanses of glazing, which are indented on both sides of the upper storey.

Each includes doors that slide open to provide the kitchen, living and dining room with access to a pair of terraces on the roof of the lower volume.

A paired-back concrete staircase with no handrail leads from one of the terraces to the pool and deck area, which is shaded at one end by the volume above.

Wooden brise-soleils running along the ground floor block filter light into the bedrooms. The wooden slats are hinged so that they can be opened up fully to the garden.

These perforated screens were also an important part of Brazil’s modernist style steered by the country’s tropical climate.

A neutral style was chosen for the interior of the house, which is intentionally furnished with low-level pieces to maintain views from the windows.

Brazilian painter and sculptor Athos Bulcão, who has created designs for classic buildings in Brasília, has made tiles to cover one wall. It features dark circles and semi-circles intermingled with a dotted blue version.

This wall runs alongside the main staircase, which features short treads that overlap each other.

Marcio Kogan founded Studio MK27 in São Paulo in the 1980s. The studio, which ranked 95th in Dezeen’s inaugural Hot List, has completed a number of residences in Brazil.

Examples include a 65-metre-long house in the Brazilian countryside and a residence in the rainforest that features a rooftop infinity pool.

Photography is by Pedro Vannucchi.