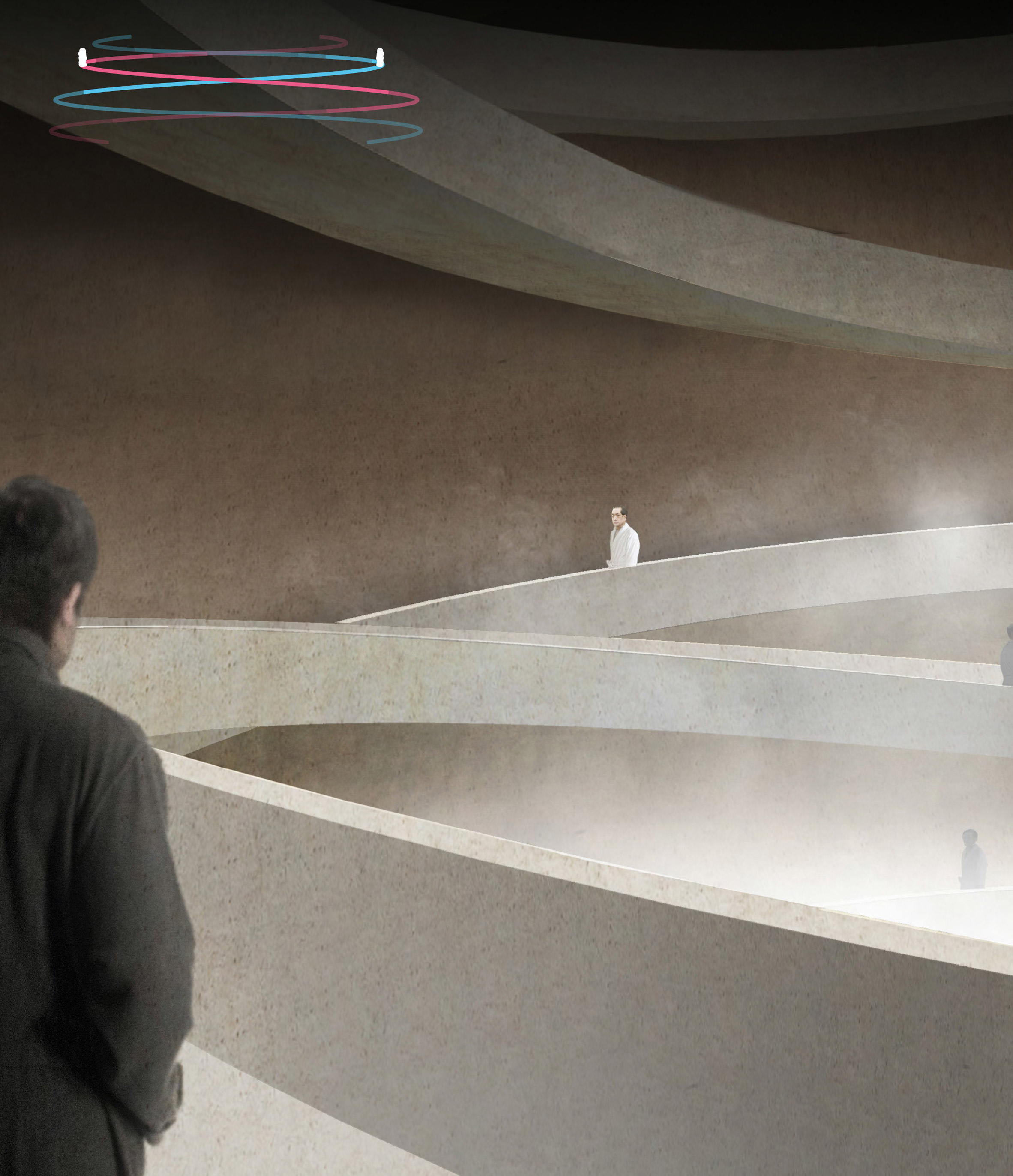 New York practices Studio MRDO and Studio LaM have have won an ideas competition with their proposal for a theatrical underground pool set in the Demilitarised Zone between North Korea and South Korea.

The 38th parallel is a circle of latitude that sits 38 degrees north of the Earth’s equatorial plane – it also formed the original border between North and South Korea before the Korean War.

After the Armistice Agreement of 1953, the Demilitarised Zone (DMZ) was formed as each side agreed to move their troops back 2,000 metres from the line, forming a buffer zone between the Democratic People’s Republic of Korea (North) and the Republic of Korea (South).

Architecture-research initiative Arch Out Loud organised the concept competition to reimagine this zone of political tension as an underground bathhouse, with the aim of beginning to ease friction.

The competition attracted almost 300 proposals and was judged by a panel that included architects Moon Hoon and Stan Allen.

In the winning design, double helical ramps spiralling down towards a communal pool at the bottom of an underground dome. An oculus at ground level allows natural light to shine through to the water below.

The performance to be acted out within is divided into three sequences. Participants walk along the 38th parallel, entering the theatre via separate entrances. After passing through the checkpoint and changing rooms, they confront each other from opposite sides of the ramp.

As they descend the ramp, participants observe each other’s feelings, while passing through “layers of tension and relaxation” in what the designers call “a process of accumulating ambivalent communal emotions.”

Upon reaching the pool, all emotions experienced in the descent are liquefied as the actors are submerged and another performance begins: one of spontaneous conversations and connections.

“The project tells a story of the relationship of human conditions [representing] different ideologies in a theatrical and performative manner, where space itself exists as both a functioning utilitarian bath and theatre,” said the jury of the winning design.

They also awarded five runners-up in the competition.

“The more successful submissions were ones that tried to address the conflict through spatial programmes, scenarios, and narratives,” said the jury.

“The projects are also gestural in creating intense metaphorical experiences in an overall peaceful grandeur for a proposed unity.”

Brooklyn-based Xiaoyu Wang and Yutian Wang‘s design Cross embraces the two territories as one united entity by introducing an undulating line that weaves across the border separating the two countries.

Above ground, the curvature of the line delineates a series of curling grassy platforms that mimic the shape of the pools that lie directly below.

The raised platforms leave openings in the ground that allow natural light to penetrate through to the subterranean space.

Yeonmoon Kim and Choonghyo Lee from Harvard University’s Graduate School of Design were shortlisted for their design Primitive Field.

Focussing instead on the physical entry across border itself, the designers described how the architecture “dematerialises its physical presence in order to reinforce the bathhouse’s social activity within the primitive field condition.”

Calgary-based entrants Vuk Filipic and Anna Murynka promised to “erase interpersonal conflict through a process of introspection,” with their design The Lofty Sky.

As visitors enter the bathhouse, they make their way through a predetermined sequence of steaming, massage, and soaking. Reaching this final stage, visitors enter suspended glass vessels that lower individual bathers into a vast subterranean dome, finishing with a paralysing dip in an ice pool.

Another Calgary-based studio, Spectacle, was chosen for its design Water Whirl, an “ecological sanctuary” at the heart of the DMZ.

Other recent conceptual proposals include an eco-resort in a Latvian forest, featuring pavilions topped with inflatable roofs that look like pine cones, and a supertall skyscraper suspended from an asteroid.