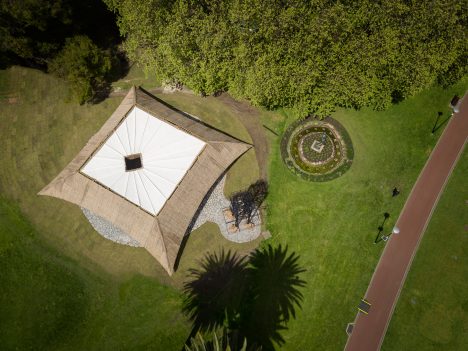 Studio Mumbai founder Bijoy Jain has unveiled his completed MPavilion in Melbourne – a square structure built from bamboo and wood, but not the cow dung originally planned (+ slideshow).

The Indian architect used seven kilometres of bamboo, 50 tonnes of stone and 26 kilometres of rope to create this year’s MPavilion, an annual commission billed as Australia’s answer to London’s Serpentine Pavilion.

Jain had also planned to use karvi panels, which are made by mixing cow dung and earth. But this material – in use in India, and tested on several prototypes built in Mumbai – would have taken too long to dry in the Melbourne climate.

Its awning-style roof canopy is made from Karvi sticks, which extend down at the corners to create dramatic points, while the flooring is bluestone, sourced from a quarry in Port Fairy – about 300 kilometres west of Melbourne.

The structure also includes a 12-metre-high “tazia” – a type of decorative tower that features in traditional Indian ceremonies. But while this was originally intended to crown the roof, it currently stands alongside the pavilion.

Instead, there is a hole at the centre of the roof that Jain sees as “connecting earth to sky”. Beneath it, a golden well is intended to symbolise the importance of water to communities.

MPavilion opened today in Melbourne’s Queen Victoria Gardens. It will be used to host a programme of over 400 talks, workshops, performances and installations over the next four months.

The organisers are yet to confirm whether the pavilion achieves its original goal of becoming the largest bamboo structure ever built in Australia.

“MPavilion is a space for the people of Melbourne to gather, talk, think and to reflect,” said Jain.

“My objective has not just been to create a new building but to capture the spirit of the place by choosing the right materials, respecting the surrounding nature and working collaboratively with local craftspeople to share design and construction ideas.”

The project is sponsored by the Naomi Milgrom Foundation, an organisation set up by businesswoman and philanthropist Naomi Milgrom.

Milgrom founded the programme, so her foundation pledged to fund the first four pavilions. She chose Jain for the third edition because of his “deep concern for craft, sustainability and community”.

She described the final result as “a calming and thoughtful space which will inspire the people of Melbourne”.

“As a utopian space for the creative industry and community, MPavilion continues to challenge the way we see and engage with the world by encouraging design debate and cultural exchange,” she said.

Jain is the third architect to build an MPavilion since the programme launched in 2014, following the tree-canopy-inspired installation by British architect Amanda Levete and the folding structure by Australian architect Sean Godsell.

The pavilion will be open until 18 February 2016. By night, it will be illuminated by a bespoke lighting installation, which will be accompanied by a soundscape by artists Geoff Nees and J David Franzke.