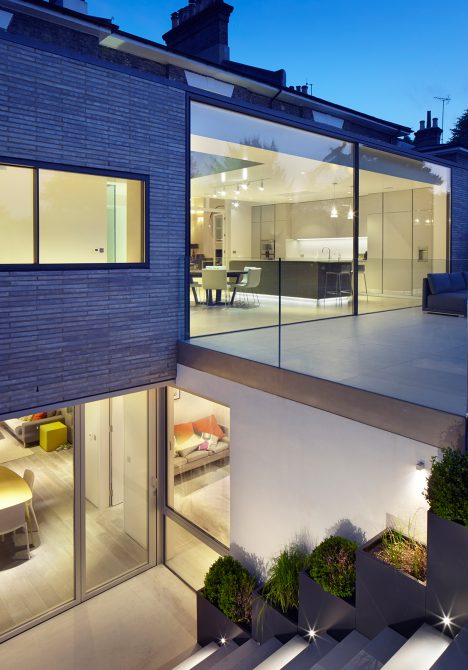 Local architecture firm Studio Octopi added this brick and glass extension to a Victorian terrace in west London to improve the connection between the property’s reconfigured interior and garden (+ slideshow).

Studio Octopi was asked to redesign the disjointed ground-floor spaces of the 1860s property in Putney, and to add two new bedrooms and a playroom.

A 1990s conservatory was removed to make room for the full-width extension to White Lodge house, which incorporates a large glazed wall that looks out onto the garden.

The ground floor was rearranged to create a more open space, with the living room at the front merging with a kitchen and dining area that opens directly onto a terrace at the back.

“By spanning the width of the house, the new extension links all the ground floor living spaces, which were previously fragmented,” explained Studio Octopi co-founder Chris Romer-Lee.

“The extension’s flank walls are set in from the boundary, with the eastern elevation retaining access to link front and rear gardens.”

The new facades are clad in long and narrow handmade bricks chosen to accentuate the extension’s width and to complement the house’s existing traditional gault bricks.

One end of the extension accommodates a snug that looks out onto the garden through a picture window. Next to the snug, a 7.5-metre glass wall with a sliding door extends the full height of the structure.

“The head of the glazing overlaps the roof construction, increasing the connection with the landscape and referencing Mid-century Modern houses so admired by the client,” said Romer-Lee.

“The delicacy of the glazing creates a striking counterpoint to the mass of the brickwork,” he added.

A staircase set against an existing brick wall descends to the basement level, which accommodates two bedrooms, shower rooms, a playroom and a kitchenette.

The stairwell is enclosed in a full-height glass box that helps to contain noise from the playroom and is topped with one of three roof lights incorporated into the extension.

“Each rooflight is lined out in anodised aluminium panels,” said the architect. “The panels reduce the apparent depth of the reveals whilst also providing a shimmering light, capturing the acute early morning sunlight in this north facing extension.”

To ensure the basement receives plenty of natural light, rooms look out onto light wells that connect to the external areas.

A staircase lined with planters ascends from one of these spaces outside the playroom to the garden.

Studio Octopi’s previous projects have included a plywood-lined loft extension for another brick terraced house and the refurbishment of a pair of Edwardian townhouses to create accommodation for resident artists.

Photography is by Jack Hobhouse.