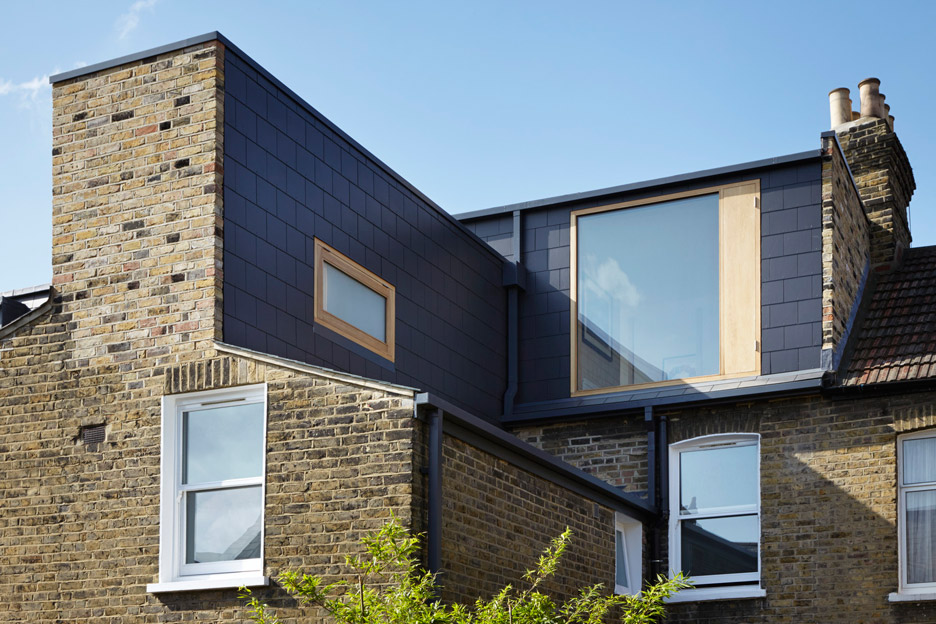 London office Studio Octopi has returned to a house it renovated over five years ago to add a loft extension, creating a study and a reading room connected by a perforated steel staircase (+ slideshow).

While the original project involved adapting the existing space of the terraced Victorian house in Battersea, south London, this latest intervention was to make more space by extending the unused area beneath the pitched roof.

The aim was to create a separate work and reading space for the client Teal Triggs, associate dean at the Royal College of Art’s School of Communication, and her partner.

“We were conscious that phase one was very specific to the findings within the existing fabric of the property, whereas the loft conversion was the first new volume to be added to the house,” explained Studio Octopi co-founder Chris Romer-Lee.

“Adding to the property needed to be bold and a change of language to the more archaeological works below,” he told Dezeen.

L-shaped in plan, the Gallery House loft extension is split into two parts, following the ridge lines of the original roof. The largest space forms the reading room, while the narrower section integrates desks and an archive for Triggs, who recently published a book of art lessons for children.

The biggest challenge was working out how to provide access to the loft without compromising the existing stairwell, which is illuminated from above thanks to a skylight installed during the first renovation.

Studio Octopi‘s response was to adapt the skylight, raising it on one side to make it straight rather than angled. The team then used perforated black steel to extend the staircase, so that light can still pass through to the spaces below.

“The staircase was heavily dictated by budget and light,” said Romer-Lee. “Teal’s partner was insistent that the loft would only go ahead if the stair had no impact on the light falling through the property.”

“The project’s budget ruled out more obvious solutions, so we chose a raw black steel frame with perforated treads,” he added. “The stairs are reduced to their simplest form and came in fitted for just £4,000.”

Externally, the extension is framed by brick walls that continue the existing structure, and slate walls that match the original roof – both necessary to prevent the need for a full planning application.

“The loft volumes and visual appearance of the exterior were all dictated by Permitted Development Rights,” said the architect. “So we had to use slate tiling and timber-framed windows.”

Inside, the two new rooms are both lined with white oiled spruce plywood. Low-level cupboards are integrated into the walls of the reading room, while the study was designed to incorporate a wall of Ikea shelving.

The two desks comprise chunky oak shelves, and both are lit from above by extra skylights and an LED strip.

Similarly, the reading rooms features two upholstered seats positioned in front of a floor-to-ceiling window. Here, a collection of artworks and objects decorates both the walls and the surfaces.

“The loft has two chairs for the client and her partner to read and, as the sun goes down, watch the south London skies,” said Romer-Lee. “Teal is originally from Austin, Texas, and the colours and light of Texas are reflected in the design and objects in the house as a whole.”

Studio Octopi is led by Romer-Lee with James Lowe. The pair’s other projects include a house for a wheelchair user and a restored school amphitheatre. The pair are also behind a project seeking to build swimming pools in London’s River Thames.