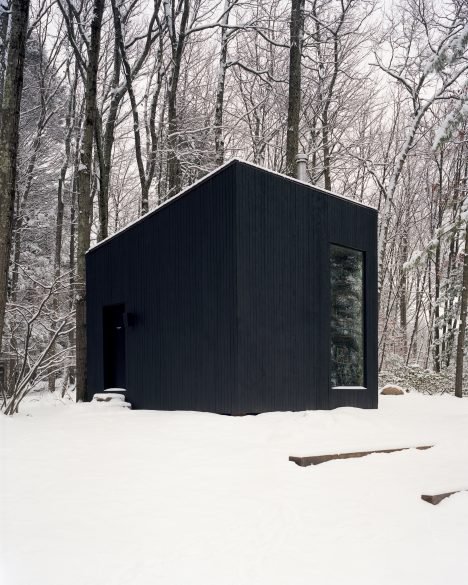 This tiny black cabin by US firm Studio Padron serves as a cosy library and guest house for a vacation home in upstate New York (+ slideshow).

Studio Padron completed the cabin to serve as a standalone, one-room library on the property. The small black hut doubles as a place for visitors to sleep.

The Minimalist structure is dubbed Hemmelig Rom – secret room, in Norwegian. It was built from mature oak trees that were felled during construction of the main house.

“The strategy for the cottage centered on preserving and transforming a material that would otherwise have become construction waste,” said principal Brandon Padron.

The cabin was a long time in the making – after being cut into large rectangular log sections, the wood was left to dry for several years on site.

Piled on top of one another horizontally, these logs form the cabin’s walls. Gaps between them create bookshelves, while larger openings act as windows.

“A logic of stacking was developed that created a varied lining of shelving on all faces of the room,” said the architect.

The one-room volume is just large enough to accommodate a bed, an armchair, and a small desk. A wood-burning stove heats the space, allowing it to be used year-round.

Two picture windows allow light to filter in, and connect the library to the surrounding forest.

Other black cabins include a hidden beach house on the rugged shore of Nova Scotia and a holiday home in Rhode Island with pyramid-like skylights.

Photography is by Jason Koxvold.