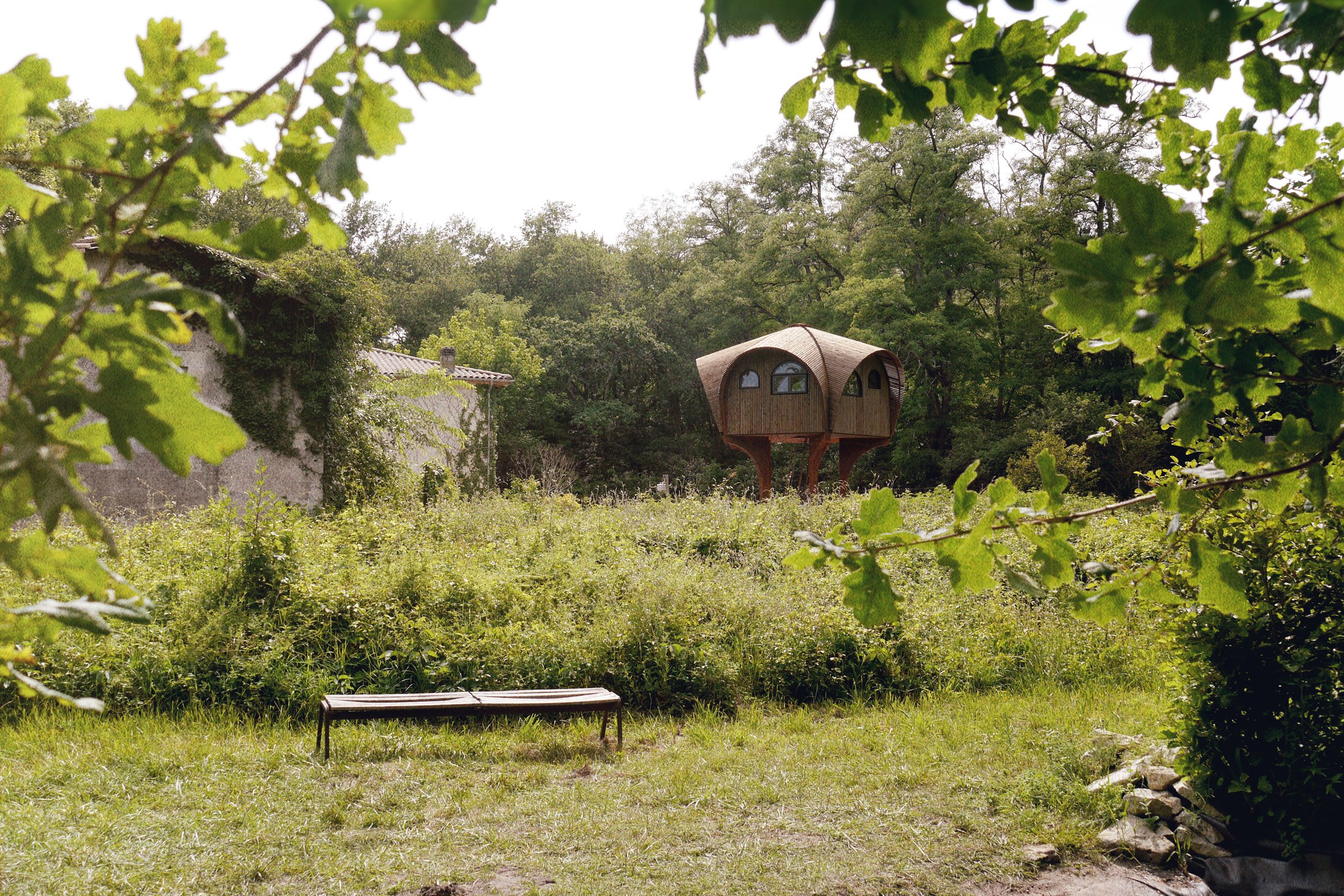 Hikers can stay overnight for free at this elevated shelter on the outskirts of Bordeaux, designed by London-based Studio Weave to reference the form and materiality of traditional water towers.

Studio Weave was commissioned to design the shelter by arts and architecture collective Bruit du Frigo, which has established a series of shelters around the periphery of the French city.

The Refuges Périurbains project, developed in collaboration with visual arts organisation Zebra 3, aims to encourage residents and visitors to explore the under-utilised spaces surrounding the city.

Hikers are able to ramble along a network of pedestrianised routes around the fringes of Bordeaux and can stay overnight in one of 12 unique shelters each designed to accommodate up to nine people.

Studio Weave’s contribution is called Le Haut Perché and is located in the Parc des Jalles to the northwest of the city. Its unusual shape is informed by water towers dotted around the surrounding region.

“Many of the area’s post-war era towers in particular contribute striking additions to the landscape, with their out-of-the-ordinary nature,” Studio Weave’s Je Ahn told Dezeen.

“Le Haut Perche is a petit brother of these extraordinary towers. We want to provide a delight – a bit of surprise, perhaps, after a long day of walking.”

The shelter is situated at the end of a path next to the disused water mill and former miller’s house of Le Moulin du Moulinat, which now houses the offices of a wildlife protection association.

Its setting in a small woodland clearing alongside a Jalle, or river, that supplies Bordeaux with one of its main water sources, informed the decision to elevate the structure to enhance its views of the surroundings.

The five-sided form featuring hooded roofs extending from each section is intended to provide focused views and sounds from various directions.

Arched openings of varying sizes are set into the facades at different heights to frame specific views that require the visitor to sit, stand or lie down to appreciate.

The shelter is clad externally in wooden strips and is perched on top of an array of arching pre-weathered steel pillars that recall the slender supports of existing water towers.

A steep steel staircase ascends to an opening in the underside of the wooden volume. The architects wanted the structure to function as a canopy, providing shelter from rain or sun, and acting as a porch for the accommodation above.

The studio worked closely with a fabrication team from Zebra 3 to develop a system for prefabricating the shelter off-site, therefore minimising disruption to the sensitive landscape during construction.

Studio Weave is a collective founded in 2006 that develops idiosyncratic architectural solutions for public, private and commercial clients. Its previous projects include an artist’s cabin that cantilevers over a Scottish stream, and a new roof terrace featuring colourful herringbone decking at the London College of Fashion.