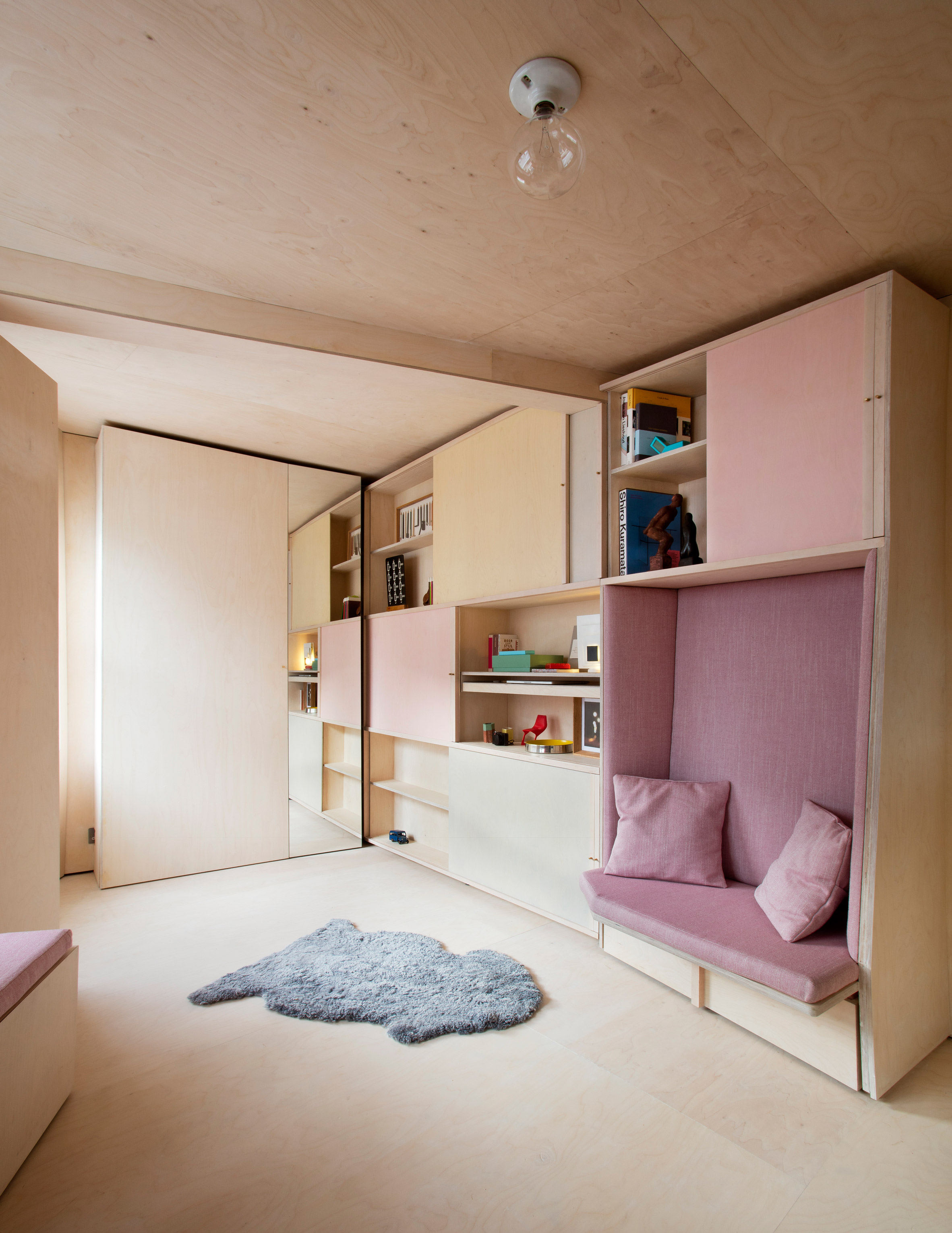 Studiomama has overhauled this tiny single-storey house in north London with built-in plywood furniture including a fold-out bed, a standing desk and extendable dining benches with pink cushions.

Studiomama co-founders Nina Tolstrup and Jack Mama bought the former mini-cab office building in an auction as a challenge to make a tiny space comfortable for living.

Tolstrup and Mama took pointers from the design of small caravans and boats to develop a scheme that packed a lot into a little space. The aim was to make a flexible living space that appears larger than its minuscule square meterage

Described as cabin-like, the residence features custom-made sections of plywood furniture that slot around the perimeter of the 13 Square Metre House to create a cohesive interior.

Each unit hosts a different function, including a bed, a work space, lounge seats, a kitchen, bathroom, closet storage and dining area.

“A tiny space like this has to be designed like one would design the interior of a caravan or boat,” Tolstrup told Dezeen. “Everything has to be custom designed as there is not room for any off the shelf furniture, which was a great challenge.”

“The use of one dominant material has made the space seamless – where floor, walls and ceiling comes together as one,” she continued. “It is also a very warm material that makes the space feel cosy and cabin like.”

Mirrors placed on either side of the space, including one that runs above the kitchen counter, are intended to extend sight lines and create a sense of spaciousness.

One of the walls of the room is angled and features two large windows that face the street. A dining table with benches on either side is placed beneath one of these windows.

Flaps at the end of the benches can be opened to create extra seating. Pink cushions top the benches and run up the back supports, where the designers have integrated more storage.

Another bench, also covered with pink cushions, is built into wall on the other side with a footrest slotted beneath.

Sliding doors tinted in pastel tones of yellow, pink and blue cover shelving. Each of the differently sized cabinets are intended for a specific use, including storing a sewing machine, games, spice jars, wine and books.

One of the doors opens to the small desk, which pulls out from the cabinet to allow for working standing up. A laptop is stored above and technical equipment below.

“We have created integrated storage and seating elements which have discreet dual functions and can easily extend to add extra surfaces for seating or working,” Tolstrup explained. “We wanted to get the space to work intuitively, without too many electronic or hidden functions.”

The bed, which is placed at the narrowest end of the triangular shaped room. It folds up when not in used to create extra space and folds down to reveal two thin bookshelves and a bedside table.

The kitchen occupies the other end of the space where the small entrance hall is flanked by two tall cabinets. Behind this wall is the bathroom – the only separated room in the house.

Studiomama presented the concept for the 13 Square Metre House as an installation at the showroom of furniture brand Viaduct at last year’s London Design Festival to illustrate how micro living can work.

“We see the issues of how to live in a compact living space to be of growing importance, especially given the trends towards urbanisation and rise of megacities,” said the designer. “We wanted to use the project to pose a question about what are the things that we really need to live comfortably.”

Designers are increasingly responding to the need to live in small homes with furniture that makes the most of every inch of the floors, walls and even the ceiling.

Space-saving solutions include a hanging storage system by Jordi Iranzo, a space-efficient box by Till Könneker and a shelving system that comprises three interchangeable desktops by Matej Chabera.

Nina Tolstrup founded Studiomama in 2000 with husband and design collaborator Jack Mama. Other projects by the studio include a pastel-coloured wardrobe with doors that unfold into a partition for large rooms, brightly coloured seating made from salvaged furniture, and a mobile outdoor kitchen housed in a wooden cart on wheels.

Photography is by Rei Moon of Moon Ray Studio.