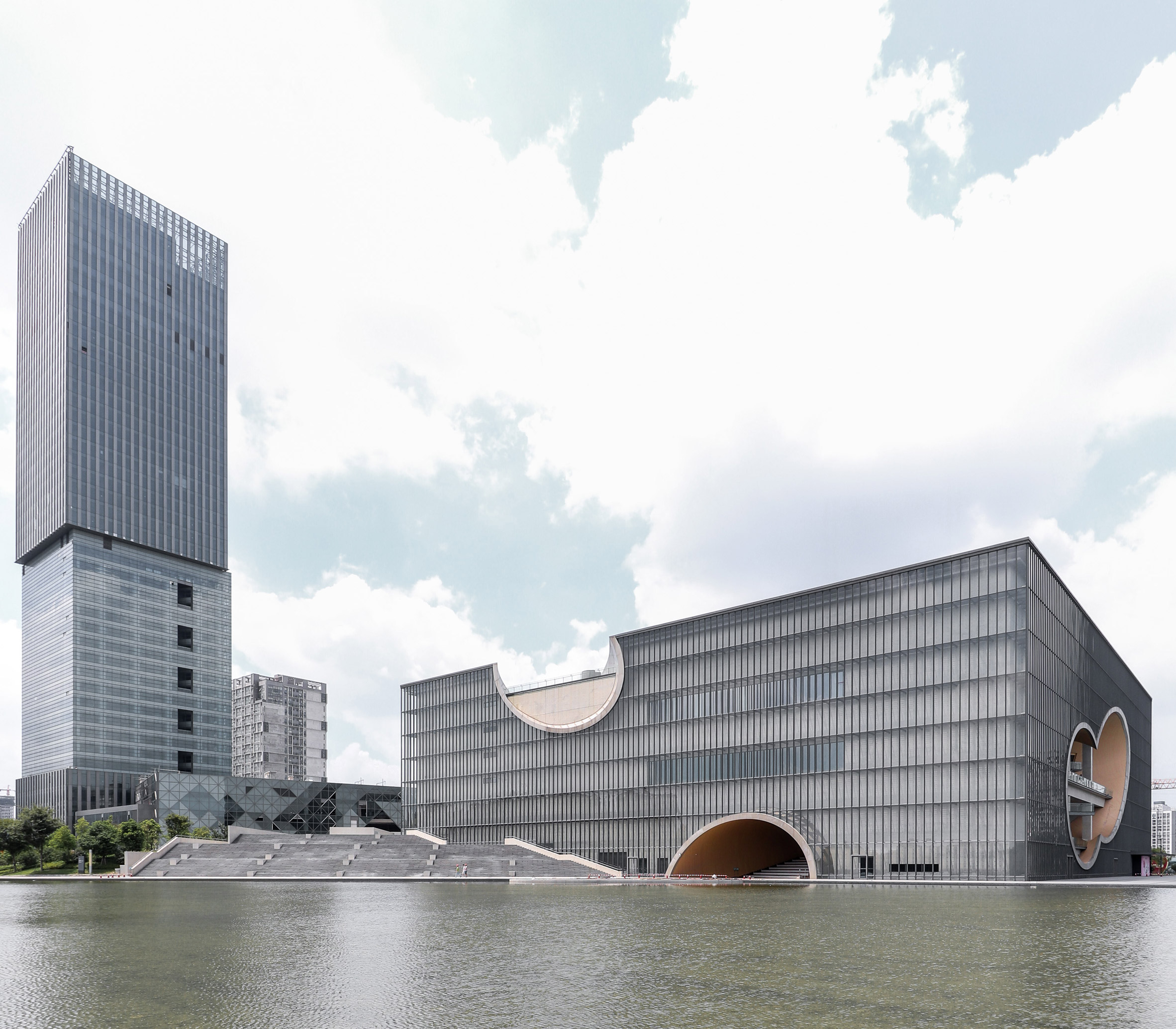 Large tunnels carve through Tadao Ando‘s concrete and glass theatre in Shanghai, which has been documented in these new images by architecture photographer Yueqi Li.

The Poly Grand Theatre is located between two man-made waterways in Jiading district, 12 miles northwest of Shanghai’s centre, and is accompanied by a housing and office tower, also designed by the Japanese architect.

New York-based Yueqi Li spent a number of summer days touring the building, aiming to capture its “playfulness”, two years after it first opened to the public.

True to Ando’s minimal style – demonstrated by projects like Church of the Light and the Naoshima Contemporary Art Museum – the theatre features a concrete structure, but here it is encased behind a glass and aluminium curtain wall.

The architect also carved five large openings through the building, creating a series of public spaces that are exposed to the open air, but sheltered from rain.

The tunnels are lined with aluminium, but painted to look like wood so as to contrast with the concrete.

“The complex creates a sense of serenity while also achieving a level of theatrical playfulness,” explained the photographer.

“Using his signature in-situ concrete, Ando creates a theatre building that offers a number of surprising spatial moments as the rectangular volume is intersected by cylindrical tunnels,” she said.

Two ellipse-shaped openings merge together to form a covered opening occupied by a two-story foyer, while another forms a tunnel above tiered amphitheatre seating that faces the manmade waterway in front.

Appearing to cut through the top of the building, the third tunnel forms a rooftop seating area, while the fourth covers the curved concrete steps leading into the building.

Due to the summer heat, the photographer found many of these spaces empty on her visit, making it hard to guess at the activities they usually accommodate. But she did discover a few people lying down on the wooden steps.

Her pictures focus on the play of light and shadow that occurs in the gap between the concrete inner structure and the glass veil.

“Familiar here are the concrete walls that jut out at an angle, unfamiliar here is the [way the] concrete sits quietly behind a veil of glass curtain wall,” she said.

“The visual effect of this unusual and somewhat gratuitous double wall helps the building take on different appearances depending on the time of the day and the angle from which one views.”

As one of the world’s most famous architects, Tadao Ando ranked at number 16 in the Dezeen Hot List, a countdown of the most newsworthy players in the design industry.

The self-taught architect has been in practice since 1968 was awarded the Pritzker Prize in 1995. His work is characterised by the use of raw concrete, dramatic play of natural light, and forms that follow the landscape.

His other recent projects include a seaside house and art centre in Mexico and a seven-storey luxury apartment tower now under construction in Manhattan.

The Teatrino of Palazzo Grassi by Tadao Ando