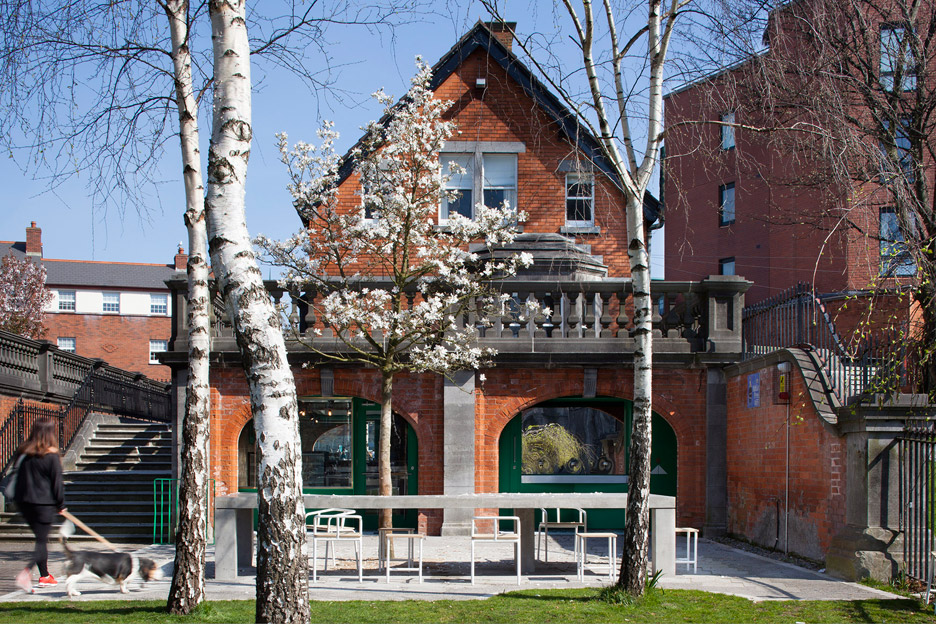 TAKA has completed St Patrick’s Park Tearooms, a cafe with bright green window frames that is located beneath the brick arches of a Dublin park originally commissioned by the Guinness family (+ slideshow).

Dublin studio TAKA was asked by the city’s council to design a cafe and toilet block to revitalise a pair of disused store rooms on the corner of St Patrick’s Park, located in the south of the city.

The park was built in 1904 as a gift to the city from Lord Iveagh – a member of the aristocratic Guinness family best known for its brewery – following the clearing of slum housing adjacent to the Gothic St Patrick’s Cathedral.

Park Lodge, a gabled building containing an artist’s residence, is positioned directly above the former storerooms.

“Rather than add a new building to the historic context of the park, the decision was made to house the tearoom servery and new public WCs within the disused rooms under the arches, while placing the tearoom seating externally so as best to enjoy the amenity of the park,” explained the architects.

“The construction strategy was to inhabit the historic fabric with a layer of construction which would be clearly discernible as an addition,” they added.

“We wanted to make the new spaces fit for purpose, while allowing for the clear reversal of any intervention.”

Infill brickwork was removed from the front of the two arches. Glass shopfronts surrounded by bright green steel frames now sit in the recesses behind.

The deep steel frames provide a seating area in the window of the tearoom, and a sink and drinking trough in the adjacent public toilets.

Two large skylights were also reopened to provide natural lighting for the cafe, and a further window was added to the structure’s gable. A new door connects the two spaces and provide access to a storeroom behind the toilet block.

The reinforced concrete roof, which the architects claim is one of the earliest examples of its kind in Ireland, was in poor structural condition, so was bolstered with steel beams.

The two new openings are supported by structural steel so that no new masonry was added to the original building.

The spaces, which are finished with grey floor tiles and exposed brick walls, open onto a terrace. Here, a five-metre-long polished concrete table is set under a magnolia tree, which was added to replace a cherry tree at the end of its life.

“  It is hoped that this communal table will continue the civic history of the site in a small, everyday way,” said the architects.

TAKA, which is led by architects Alice Casey and Cian Deegan, has previously designed a concrete and brick cricket pavilion, and a mews house with protruding brickwork in Dublin.

Photography is by Alice Clancy.