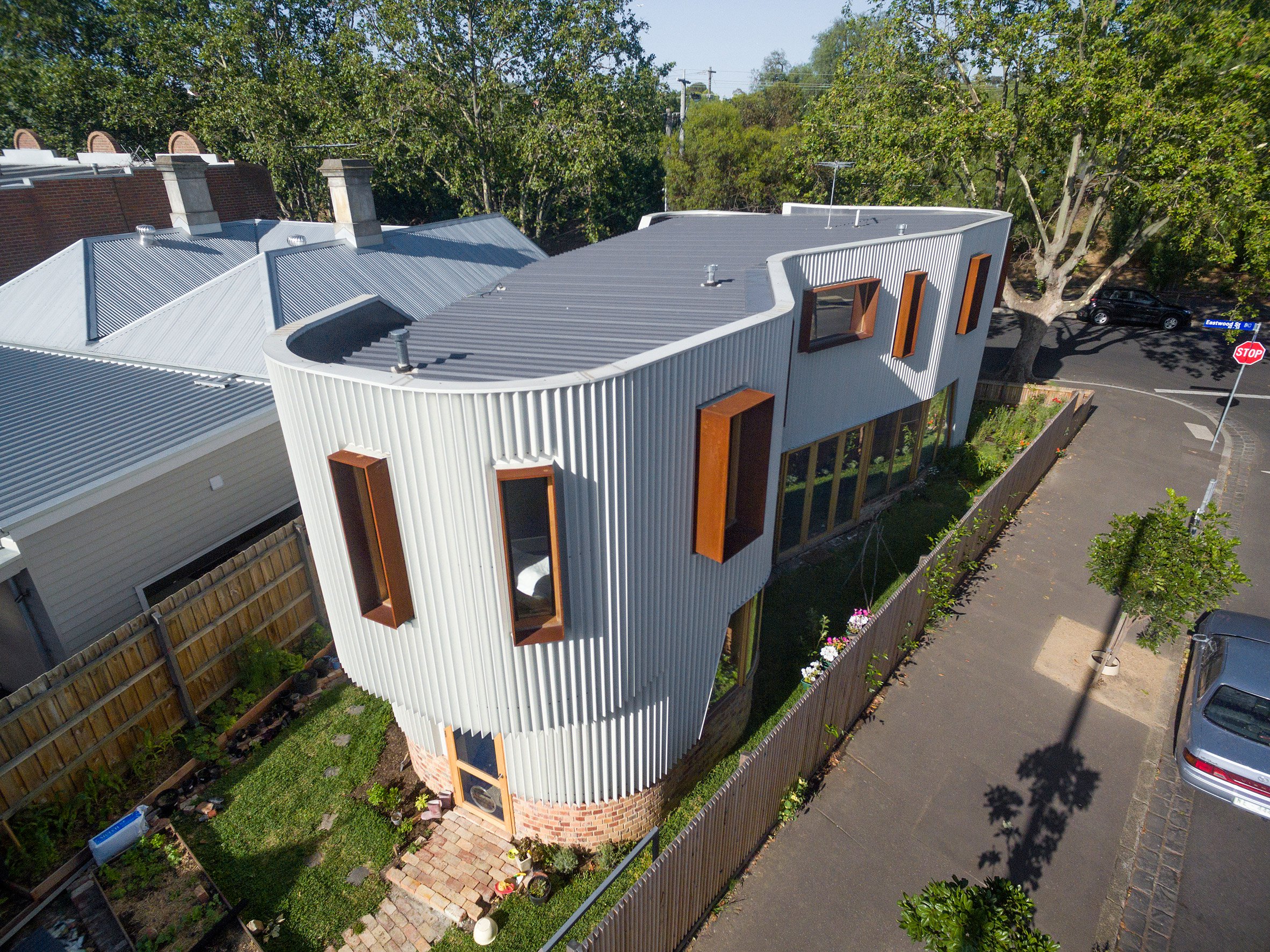 The curving corrugated-metal exterior of this house in Melbourne by local studio Tandem forms a continuous surface that encloses small pocket gardens.

Tandem created the True North House for a tapering triangular plot in the Kensington neighbourhood of Melbourne, which was previously occupied by a decaying 1950s cottage and a stables built in the 1880s.

The stable block was renovated to create a one-bedroom townhouse, and the adjacent three-bedroom house was developed with a triangular form to optimise the remaining space on the irregular site.

“The open corner block is wide enough to accommodate two rooms and a corridor on the western boundary, narrowing to a single room towards the east,” explained the studio.

“Rounding the ends of the triangular form set in play a language of soft, curving elements that extend and enfold space in and around the building.”

The undulating plan is wrapped in corrugated metal, forming a continuous surface that comes together in a sharp pleat above the front door. The architects described their influences for the form as ranging from “a billowing dress” to “a coral bommie”.

Small north-facing gardens and a vegetable patch are accommodated in the recessed portions of the curvaceous shape, which also ensures the building doesn’t prevent daylight from reaching the garden of its neighbour.

At the building’s narrow end, the facade breaks and the upper floor extends outwards to form a protective porch over the back door onto the garden.

The steel cladding covering the exterior was custom folded to create a deep pleated surface that helps to stabilise the curving form.

The triangular profiles also trap a layer of air that enhances the cladding’s insulating properties and produces constantly shifting shadows that animate the facades.

Pre-weathered steel window frames that puncture the ribbed cladding on the upper level project outwards to provide views of the surroundings while limiting overlooking from outside.

Bricks reclaimed from the demolition of the existing cottage form low-level walls that also extend across the surfaces flanking the entrance.

The brick provides a connection to the heritage-listed stables and the traditional materiality of the area’s architecture. Surfaces including the curved kitchen island continue the use of the brick inside the house.

The open-plan ground floor contains a sunken living room, a kitchen and dining area, and a double-height atrium, with full-height glazing opening onto the adjacent gardens.

Three pods suspended above this space and accessed by a staircase and bridge house bedrooms and bathrooms on the upper storey.

Wooden cladding is applied to surfaces across the first floor. Vertical boards cover the walls of the corridor and a bedroom at the western end of the building, while the master suite at the narrower point features built-in storage wrapped in veneer.

The home was recently shortlisted for the annual Victorian Architecture Awards, which recognises innovative projects across Victoria, Australia.