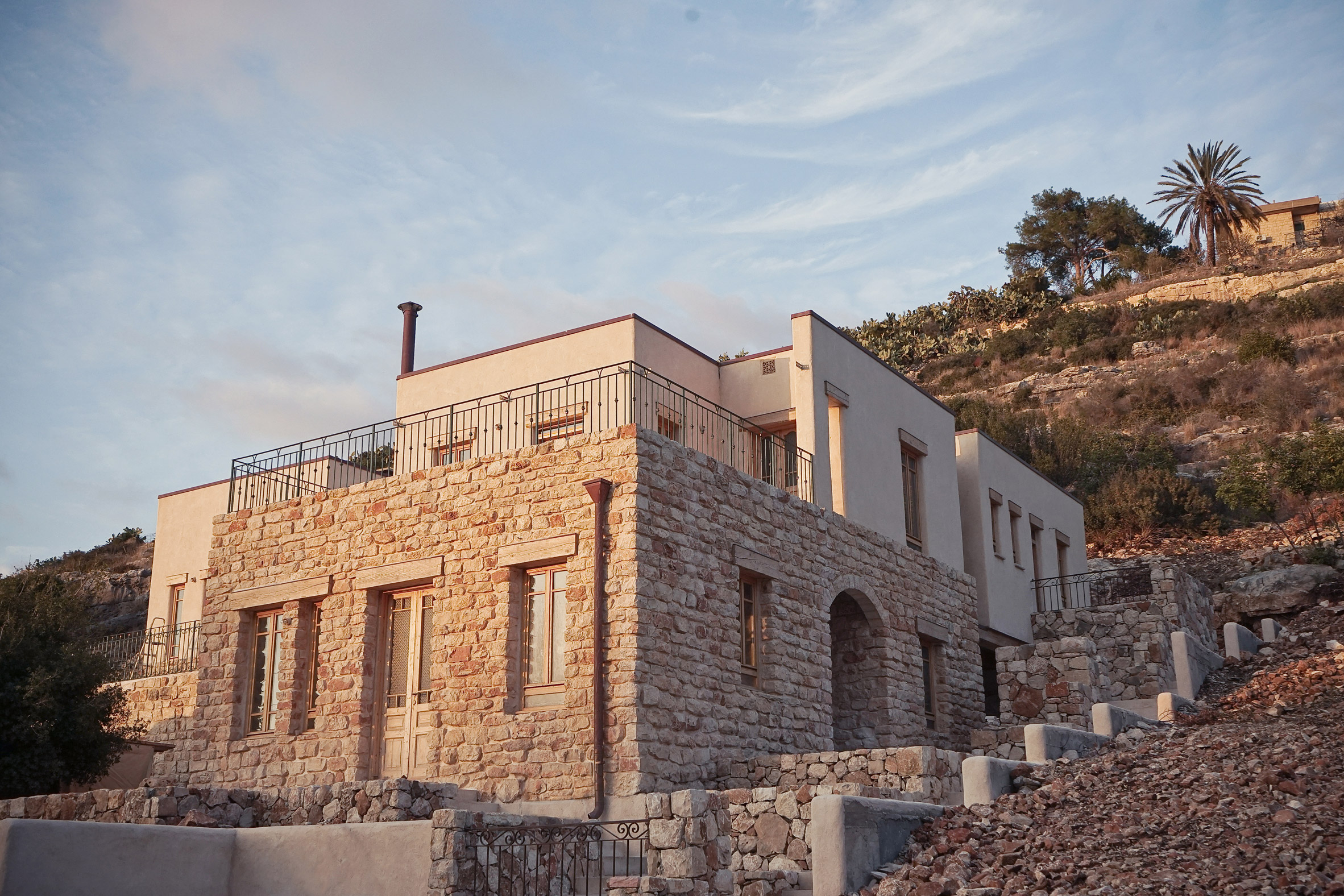 Walls made of hemp and lime, and local stone make up this sand-coloured house on a hill in northern Israel, which Haifa-based studio Tav Group designed for environmentally conscious artists.

Tav Group designed the 250-square-metre house in the Ein Hod artists’ village in Israel’s Haifa District for environmental and social activists. The aim was to create an “archetype of sustainability”, using only environmentally friendly, locally sourced and natural materials, and to avoid concrete altogether.

Among these choices is the hemp-based walls of the main floor. The architects named them “cannabis walls” as hemp is a cannabis plant.

The bio-composite material, which is known as hempcrete, is a composite mixture made up of hemp hurds – the woody inner parts of the hemp start left after the bark fiber is removed – and hydraulic lime. It is cast within timber frames in a similar way to concrete, and provides good thermal insulation as well as the final finish.

Hempcrete is becoming a popular sustainable alternative to concrete. Ghent studio Martens Van Caimere Architecten also used the material to render a house in Belgium, while Swiss architecture office FRAR used it for the renovation of a property in the French village of Douvaine.

According to Tav Group, this is the first time that hempcrete has been used in Israel.

A thick layer of earth-based plaster covers the hemp-based walls, while other sustainable materials used in the project include the partitions, which are are made of rammed earth cast on wooden frames.

The team also employed traditional building methods for the residence, which steps up a hill of a quarry where stone to build for the village houses was sourced.

Like with these residences, locally sourced stone was carved on site to form the basement level of the residence, where the artist’s workshops and studios are located.

Stone also forms the balustrade for the steps leading up to the entrance and paving throughout the house, as well as the fire place in the lounge, which features a curvilinear rendered chimney.

The earthy tones of the naturals materials also means that the residence blends in well with its surroundings. These hues are complemented by wooden window frames and doors, and the rustic wooden furnishings inside.

Overall, the heavy material choices increase the thermal mass of the building to reduce overheating in the in the warm climate. Also helping to provide respite from the heat is the south-facing courtyard, which opens the main living areas and bedrooms on either side to views of the Mediterranean sea and the sea breeze.

The architects also employed an ecological systems to source water, heat and ventilation for the residence, including greywater purifying and reuse rainwater collection, solar panels and passive air conditioning.

Photography is by Yaeli Gabriel.