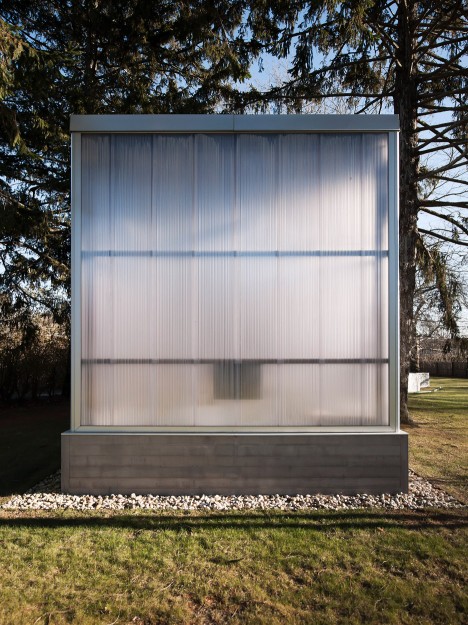 US firm TBD Architecture + Design Studio has created a studio building for a Hamptons couple that consists of two intersecting volumes clad in different materials (+ slideshow).

The Leff Art Studio is located on the edge of a residence in Water Mill, a hamlet on Long Island in New York. It was designed for an artist couple.

The accessory structure, also named His/Hers Art Studio, was built within a cluster of mature trees – a factor that influenced the building’s massing.

“In pursuit of not damaging any existing trees, the building shape was bent to fit between the trees,” said TBD Architecture + Design Studio, which is based in New York City. “Furthermore, the foundation was designed to reduce disturbance to existing root systems.”

The building consists of two intersecting volumes. One features a steel frame and polycarbonate walls, and houses a collage studio for “his” work.

The other – which contains a ceramics studio for “her” – has a wood frame with cedar siding and punched windows.

The two skins are meant to reflect the different working environments within the building.

Polycarbonate walls were used to create a private and introverted space that is filled with diffused natural light. The frosted panels obscure colours and shadows that are projected onto the building from the outside.

The more traditional, wood-framed volume has windows that frame views of the property, in turn establishing a direct visual connection with the surrounding landscape.

To minimise the building’s impact on the site, the architect elevated the slab floor on a steel frame that sits atop 14 concrete piers.

The piers were dug by hand, and the steel frame was designed so that a pier could be moved up to three feet (one metre) away in order to keep large tree roots intact. This ensured that no trees were damaged during construction.

“All trenching for utilities were hand dug, large roots were left in place and any required conduits were threaded underneath,” the architect said.

The his-and-hers art studio is visible from the main house. In the evening, the polycarbonate volume is intended to be illuminated.

“At night, the translucent volume offers an option of either glowing or of providing a light show directed by a spinning disco ball and a colour-changing spotlight,” the architect said.

Other home studios include a wooden micro studio that was constructed in a Brooklyn backyard, and a Seattle horse stable that was converted into a studio space and guest house.