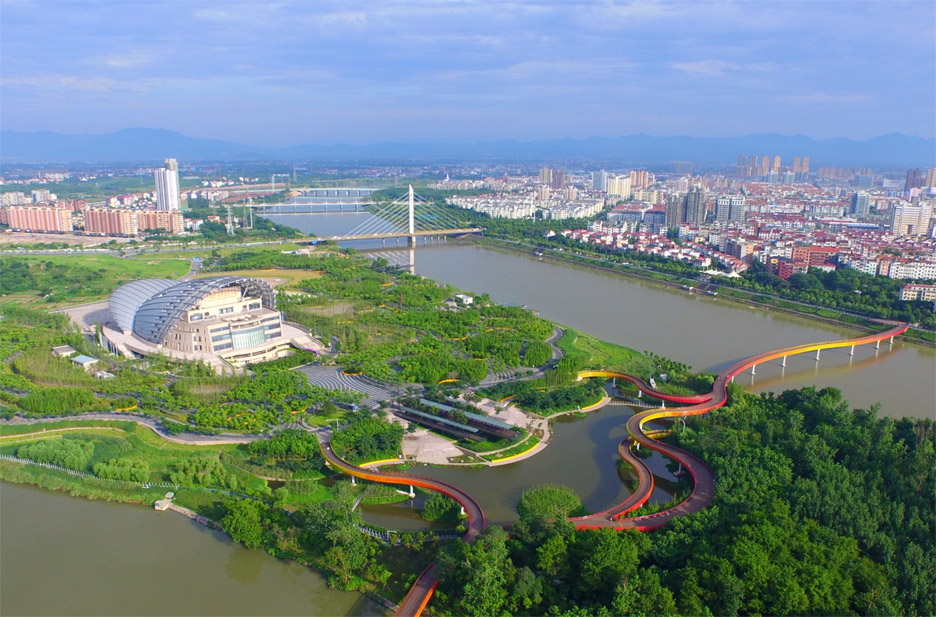 Yanweizhou Park, which was crowned World Landscape of the Year at World Architecture Festival 2015, is a 26-hectare wetland park at the mouth of three rivers in China’s Zhejiang Province.

The site was previously dominated by an unattractive concrete flood wall. Buck says the key to the project was finding a way to remove this wall without compromising flood protection.

“The flood wall just destroyed the natural ecosystem for the area,” he explains in the movie, which was filmed by Dezeen at World Architecture Festival in Singapore.

“What we wanted to do was replace it with a terraced embankment,” he says. “Through doing that we were able to reconnect people with the waterfront, but at the same time we were able to control the floods in a ecological way.”

Rather than simply providing a barrier, the terraced landscape absorbs floodwater, which provides nourishment for the park’s plants throughout the year.

The park features a network of meandering raised pathways and bridges, which allow visitors to freely explore the area in the wet season.

A red and yellow pedestrian bridge snakes across two of the 100-metre-wide rivers, which Buck claims can “withstand a 200-year flood” – a flood with a 0.5 per cent chance of happening in any given year.

The distinctive form of the bridge references a local traditional dance called Bandeng Long, in which villagers construct a dragon from wooden benches and lanterns and dance with it through the fields.

“The bridge has become a landmark for the city,” Buck says. “The park attracts 40,000 people per day.”

This movie was produced by Dezeen for World Architecture Festival. All photographs are courtesy of Turenscape.

World Architecture Festival 2015 took place in Singapore from 4 to 6 November, alongside partner event Inside World Festival of Interiors. Dezeen is media partners for both events and will be publishing more video interviews with the winners over the coming weeks.

The post Terraces of plants in Yanweizhou Park “control floods in an ecological way” appeared first on Dezeen.