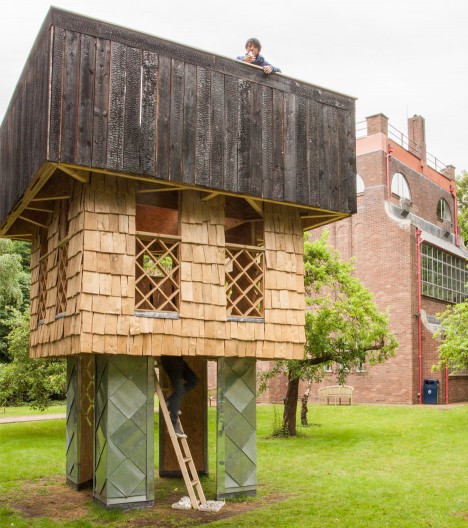 Graduate shows 2016: Japanese architect Terunobu Fujimori worked with students from Kingston University to create this tiered pavilion, which is clad in pieces of charred timber, zinc and chestnut wood (+ slideshow).

Fujimori designed and built the Seminar House Pavilion with postgraduate students from Unit 5 during his residency at the architecture school earlier this year.

The architect – known for projects including a stilted tea house raised precariously above the ground on crooked tree trunks – helped the students build the pavilion in the grounds of the Dorich House Museum, in Kingston, south London.

The pavilion is constructed from oriented strand board and covered in a combination of zinc and chestnut shingles, and planks of charred timber.

Wooden ladders link its three levels, allowing visitors to climb up to a rooftop viewing platform.

The pavilion is part of an annual 1:1 scale construction project run by Kingston tutors Takeshi Hayatsu and Simon Jones.

The materials for the structure are partially recycled from the 2015 pavilion, which was based on the entrance to a Japanese temple.

Students produced the cladding materials during a series of practical workshops with specialist word and metal workers.

Meanwhile Fujimori shared his technique for Yakisugi – a traditional wood-charring technique originating from southwest Japan, which was previously used by the architect to create the cladding for his Charcoal House.

Fujimori also gave a seminar at Dorich House on the relevance of craft and the vernacular in contemporary architecture – a field that is increasingly dominated by digital techniques.

The design is influenced by the group’s field trips to Nagano and Tokyo, and a group of Japanese avant-garde architects that Fujimori refers to as the Red School.

“In contrast to other contemporary Japanese architects such as SANNA, Fujimoto, or Maki – whom he considers to be of the White School – their work is raw, tactile, sometimes improvised; sometimes self built, invariably uses elemental, natural materials and is very often somewhat odd to western eyes,” explained the team.

The Red School has its roots in Takamasa Yoshizaka’s 1965 Inter University Seminar House Project – the starting point for this year’s pavilion.

The pavilion’s tiered structure, which steps outwards towards its summit, is based on the upturned pyramidal form of this building.

“All of this research combines to create a very special approach to our built project this year, which combines memories of Fujimori’s teahouses, Matsumoto Castle, and Yoshizaki’s Inter University Seminar House, to create an elevated public room with and garden terrace above overlooking Richmond Park,” said the team.

The pavilion is open to public during museum opening hours throughout summer 2016.