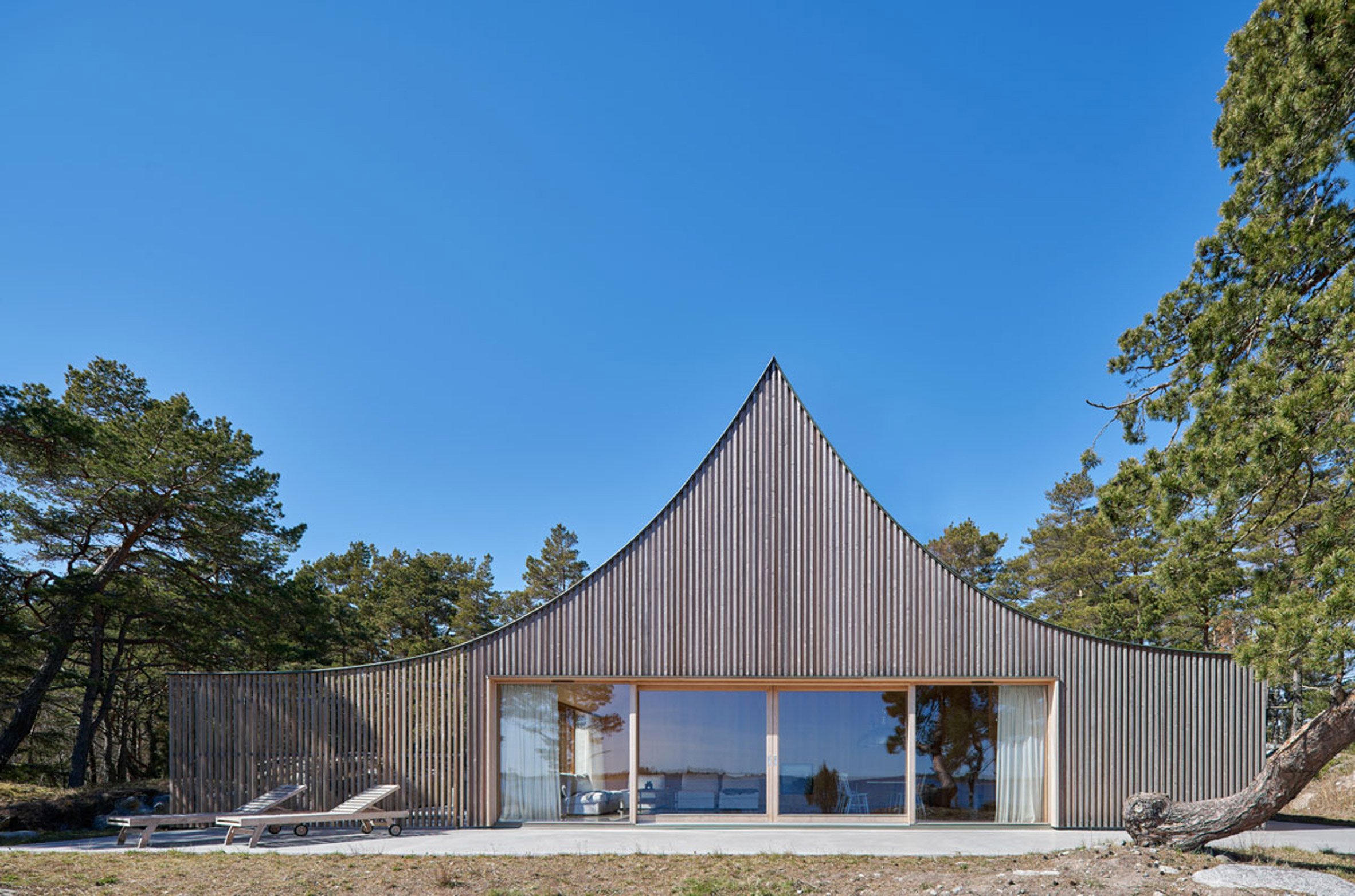 Swedish studio Tham & Videgård Arkitekter designed this summer house with a dramatic scooped roofline for an island in the Stockholm archipelago.

Local office Tham & Videgård Arkitekter designed the property for a site on a promontory that extends from the small island of Krokholmen in Stockholm’s outer archipelago.

At House on Krokholmen, expansive views towards a nearby lighthouse and the open sea informed a design incorporating large openings that connect the interior spaces with three terraces.

The house’s unusual profile introduces a verticality to both the interior spaces and the external form, which recalls tented structures evocative of summer living.

“The tent-like room and silhouette of the house connects to the idea of the least complicated way to spend time in nature,” said the architects, “but it is also inspired by the older Swedish pavilion and gazebo architecture – light buildings carefully placed in the landscape.”

In response to a brief for a single-storey house containing a series of private and communal spaces, the architects introduced a dividing wall that separates the open-plan living area from the bedrooms, bathroom and storage spaces.

“We proposed a two-part plan,” said the studio. “Through a central wall holding the fireplace, a narrow opening gives access to bedrooms, bath and storage, that are oriented to the forest in the west.”

A large space housing the lounge, kitchen and dining area is lined on three sides with windows that slide open to enable a seamless transition onto the terraces.

The space outside the long eastern facade looks directly out towards the sea, while an extended section of the swooping timber wall forms a screen protecting a south-facing terrace.

The building’s structure is made entirely from timber, apart from a steel girder that distributes loads above the main facade.

The curving zinc-clad roof reaches a height of six metres at its apex, and is supported by curving glulam beams that meet at a beam running along the roof’s ridge.

Cedar is used for the facade panels and screens that run around the exterior of the house. These surfaces are punctuated by the glazing, providing different degrees of privacy and shelter.

Internally, polished concrete floors and ash wood used for all the wall panels and carpentry combine to create a pared-back and muted palette.

The studio has previously designed several other summer homes in the area, including one with an exterior entirely clad in black steel, and another with a zig-zagging profile formed by a row of concrete gables.