The Chapel by a21studio is like “a big colourful lantern” 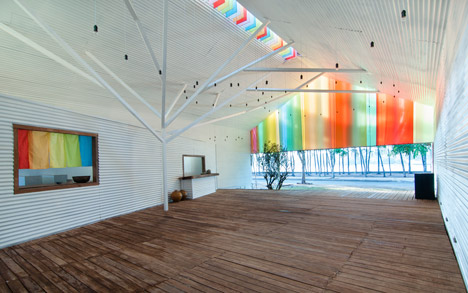 World Architecture Festival 2014: in this exclusive video interview Vietnamese architect Toan Nghiem discusses the use of bright colours in The Chapel, the community centre that was crowned World Building of the Year 2014 earlier this month (+ movie).

Built on a tight budget, the architects used layers of multi-coloured fabric to cover the windows in order to “add warmth” to the basic white steel structure.

“The Chapel is a a very simple form with white walls,” says Toan. “We added colourful curtains, which are very attractive and affect the interior light during the day.”

He continues: “At night the building turns into a big colourful lantern. The colourful curtains add warmth to the white background.”

The building is based on traditional Vietnamese community spaces called “dinh.”

“Dinh is a pavilion for relaxation in the village,” says Toan. “That is the place where people celebrate with colour and music. We designed The Chapel with the same spirit. It can adapt to many different activities.”

The roof of the building is supported by a tree-shaped steel column, which is “to remind people about the place where they used to play in their childhood,” Toan says.

In order to build the project on budget, the architects had to recycle scrap material left over from the owner’s previous projects

“We used about 20% scrap from previous buildings for the metal structure of the new building and for the wooden floor,” Toan explains.

The Chapel won the Civic and Community category at World Architecture Festival 2014 as well as the overall prize.

World Architecture Festival 2014 took place at Marina Bay Sands in Singapore from 1-3 October. Award entries for next year’s festival are open from February 2015.