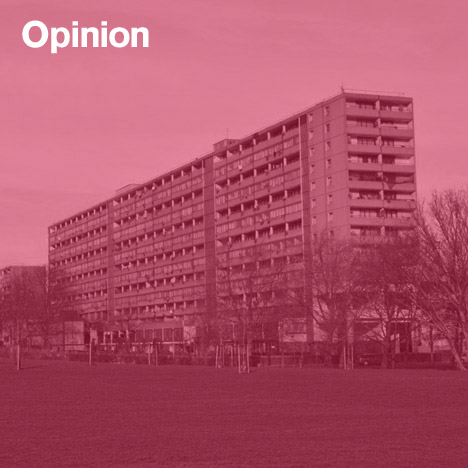 Opinion: the fight for London’s Aylesbury estate – a negative symbol of the Modernist-inspired drive to standardise housing design – is about saving the ideas not the architecture, explains Owen Hatherley.

At the Commonwealth Games last year in Glasgow, a spectacle was promised of the celebratory demolition of the city’s Red Road flats. This would symbolise a ‘new Glasgow’ (one of several there’s been over the last few decades) emerging out of the apparently dogged public perception of the former Second City of the British Empire as a place of gigantic tower blocks and razor gangs.

Aside from the fact this stereotype is now so hoary and silly that it can’t be held by anyone outside of a few enclaves in Surrey and Edinburgh, it missed the fact that in Glasgow – historically, always a left-wing city – the demolition of public housing is not considered a cause for celebration, even housing as awesomely forbidding as this.
Still, there wasn’t a preservation campaign for this super-high-density cluster of wide slabs and skyscraping towers, there were no protests from conservationists of modern architecture – just a feeling that what happened here shouldn’t be insulted. The demolition was postponed, removed from the opening ceremony of the games, but the destruction of Glasgow’s extensive collection of imposing system-built towers still continues.
It’s an appropriate time to look more closely at standardised housing
At the time of writing, the Whitevale and Bluevale high-rises – at one point the tallest in the UK – are being dismantled floor by floor. As if in a rush to document all this before it disappears, Scottish architectural historian Miles Glendinning has started Tower Blocks Our Blocks – an attempt to catalogue and describe every block in the UK, as architecture, as a social project, and as a place to live. It’s an appropriate time to look more closely at standardised housing.
All over Europe in the 1960s, and right up until the late 1980s in the Soviet Union, mass housing was dominated by the prefabricated concrete panel to a degree that now seems extraordinary (if less so in east Asia, where they’ve never stopped and see no particular reason to).
In Britain, minister Richard Crossman decided to solve a housing crisis at a stroke by subsidising councils to use usually French or Danish prefab systems to put up towers and slabs at breakneck speed. This was often without the intercession of architects – volume housebuilders used systems as a product, which they sold to local authorities. In Sweden, the Million Programme did much the same, in a successful attempt to provide every person in the country with a decent, spacious, warm home.
In the USSR, architects worried their profession would be limited to the occasional prestige building, as engineers with their endlessly repeated panel-construction towers stacked up what is by now probably at least two-thirds of the extant housing stock. And in the USA, where public housing was always sufferance rather than housing as good as any other (and often better), there was an unsurprising enthusiasm for quickly built and monumental constructions. In cities like Chicago, they’ve been demolished even more rapidly than in Glasgow.
This is architecture that nobody has ever really tried to defend
Although Modernists can’t escape culpability, given that the planning is (semi-) Corbusian and the architect-free, technics-in-charge approach was (sort of) anticipated by Hannes Meyer’s Bauhaus, this is architecture that nobody has ever really tried to defend. Architects not only hated that they often had very little to do with it, they were always, invariably blamed for it by the public. Given that this was one of the most intensive eras of building, these buildings came to exemplify modern architecture for a lot of people – and everything that was wrong with it. All the familiar epithets: monumental, totalitarian, inhuman, bleak, joyless.
In the UK they’re also associated with high-profile constructional disasters, such as the collapsed Ronan Point in east London or the notoriously leaky flats of the Yorkshire Design Group. By the time the largest of London’s system-built estates, the Aylesbury in Walworth – a series of long, parallel grey corrugated concrete slabs – was finished in the early 1970s, prefab was almost dead.
Even for the die-hards, this was where Modernism, in its alliance with dodgy construction engineers and vote-chasing councillors, had reached a moral and aesthetic nadir.
This February, that very Aylesbury Estate, that was considered the unlamented last stand of technocratic anti-architecture, that stood in election campaigns, adverts and films as an emblem of urban decay, and that has been subject recently to ‘decanting’ and replacement with normal streets and tenements, was occupied by protesters angry about the estate’s pending demolition.
Nobody, the occupiers included, is arguing that the Aylesbury Estate is a great work of architecture, just as those who defended the Victorian streets and tenements that were demolished to build it wouldn’t have argued for the originality or specialness of their design.
They’re just mundane pieces of a social city, and they’re needed more than ever
On the contrary, the Aylesbury – and other, similarly production-line estates in London, from Earls Court to Stratford – is being championed because it serves a social function that is, like its residents, being rapidly expelled from major cities.
From Chicago to Moscow and Stockholm – the public provision of low-cost, publicly owned and decent housing as a right rather than as an investment is being driven out. Recoiling from its visual forms in the 1970s, architects, commentators and the public may not have realised just how essential and important a right this was.
For some time, we’ve looked at the Modernist legacy to uncover the gems in amongst the systems, the panels and the repetitious monoliths; made cults of the great designers of the era – Stirling, the Smithsons, fill in your own favourite. It was necessary to try and save just something, anything, of the legacy before it all disappeared into a morass of cul-de-sacs and ‘town houses’.
But in the process, Modernist enthusiasts missed the fact that a social purpose was being filled by those slabs and points they disassociated their heroes from. The places people are staking their lives on now aren’t architectural icons. They won’t be listed, they won’t be the subject of monographs. They’re just mundane pieces of a social city, and they’re needed more than ever.
Photograph by Matt Brown.

Owen Hatherley is a critic and author, focusing on architecture, politics and culture. His books include Militant Modernism (2009), A Guide to the New Ruins of Great Britain (2010), and A New Kind of Bleak: Journeys Through urban Britain (2012).
The post “The places people are staking their lives on now aren’t architectural icons” appeared first on Dezeen.