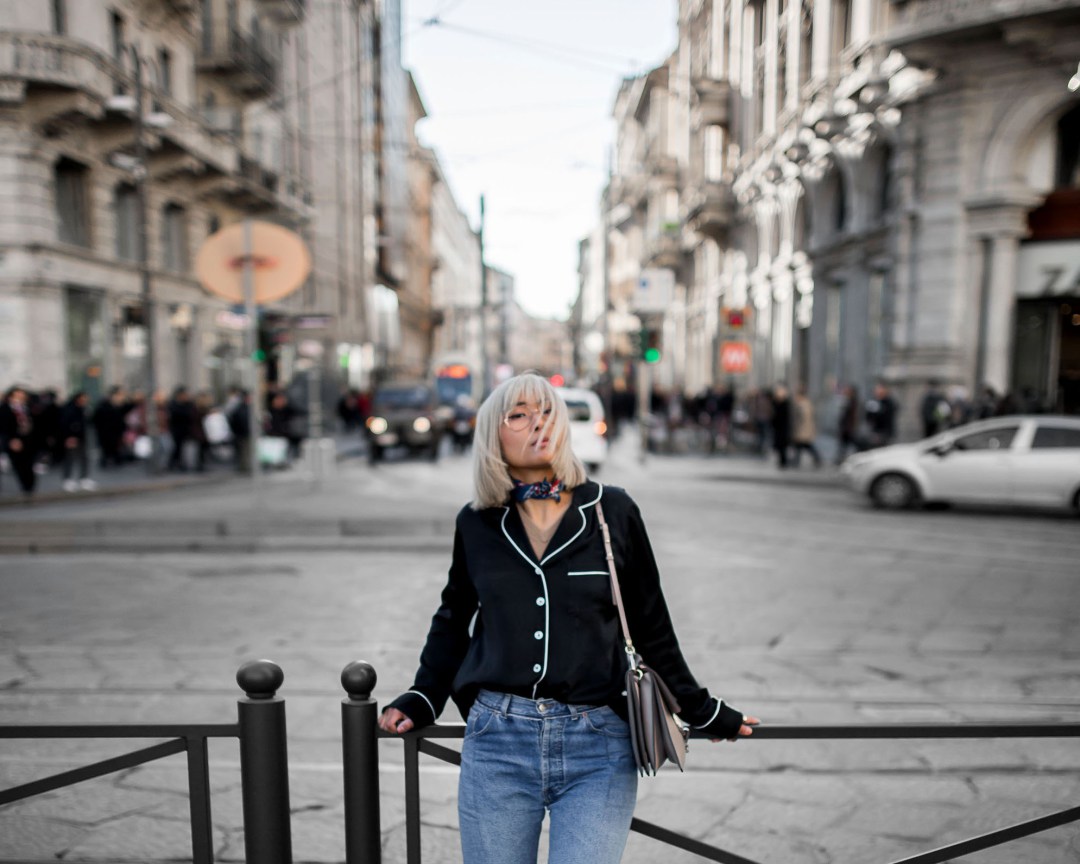 The Pyjama Traveler in Milan

The Pyjama Traveler in Milan

Though to step out in one’s pyjamas is very un-Italian indeed.

This editorial features: Silk Pyjama Shirt and Pant by Grana
(use my code “JIAWAxGRANA” for 10% off, plus free shipping world wide)

For a good many reasons, I always pack a pair (or two) of luxe silk pyjamas when I travel. On the one hand, it is for the simple practicality of sleeping with the softness of silk against the skin, and, on another – more supercilious – hand, to throw on for an impromptu photo-op in a luxurious interior, where a certain state of undress is warranted. Then, of course, there is the morning after the night before, where, in that very Italian way, the deliciously lengthy process of aperitif, dinner, and then drinks after (occasionally with a party in between) had progressed into the small hours, and one simply does not want to get dressed at all.

However, the rub of it all is that, despite such elaborate evening activities, to step out in one’s pyjamas the next day, is very un-Italian indeed. The Milanese woman is closer to the patriarchal old world than many of their more progressive European counterparts (demonstrated also in part by the leitmotif of a female absence – exclusion? – from the men’s fashion programme in Florence and here in Milan, but more on this later). For her, it is simply a matter of self-respect to put all efforts, practical or impractical, into her appearance, whether it is at the opera or the local alimentari. While a more cynical eye may see this as complicit in objectifying women, there is an element of glamour and mystique about the women of Milan that is nonetheless enviable, even for the second-day-hair-and-faded-makeup sporting minimalist that is yours truly.

The words of the pre-eminent Emily Post are pertinent here: “but for the transient impression that we make at home, abroad, everywhere in public, two superficial attributes are alone indispensable: good manners and a pleasing appearance.” While Post’s blistering treatise on etiquette are often satirized now as obsolescence, where the good opinion of others is required to achieve one’s place in life (and so much the more difficult this is for women in Italy), this view is not so easily dismissed as lacking relevance, even today.

However, I would intercede that the definition of a ‘pleasing appearance’ may be somewhat different now. Where sneakers with a cocktail dress, for example, may have shocked an earlier, more disciplined world, it’s its wanton vulgarity (a word Post used often) that makes it so exciting to the millennial generation. This wilful ignorance of rules is apt to lead to many an awkward misunderstanding, but as well, a providential mistake. For example, the mistake of a pyjama shirt for a slouchy day-time blouse, or a pyjama pant for a wide-legged trouser.

Out of respect for the customs of the place we are in (and to allay the mortification of my travel companion of the week) I capitulated to wearing my silk pyjamas – by Grana – as plausible separates. It goes without saying, however, that despite my intention to camouflage, I stood out like a gauche sore thumb in this city of elegance.

Created in collaboration with Grana

The post The Pyjama Traveler in Milan appeared first on Beige Renegade.