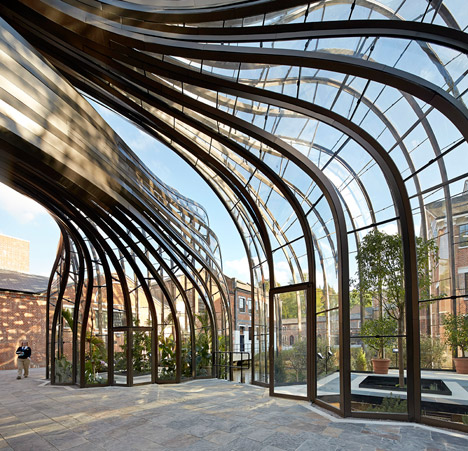 Located at an old Victorian paper factory in Hampshire, Laverstoke Mill houses a new distillery within renovated brick buildings, while a pair of curved glass greenhouses are used for growing the tropical and Mediterranean plants used to create Bombay Sapphire gin.

Citing his inspiration as the “phenomenal glasshouses” by architects including Joseph Paxton, Thomas Heatherwick created the site’s new glass structures using strips of metal that swoop out from the existing buildings and down towards the waters of the River Test.

The British designer, whose projects to date include the London 2012 Olympic Cauldron and the redesigned routemaster bus, unveiled the project two weeks ago and it has largely been met with praise from critics.

Jay Merrick, architecture critic for the Independent, described the complex as a “gin palace with a fantastical Willy Wonka vibe”.

“The pièce de résistance was a classic piece of Heatherwick magic: two greenhouses that swirled up in glinting pleats, like Art Nouveau stills, before Wonka-ing through the end wall of one of the two distillery plants,” he said.

In the Telegraph, critic Bethan Ryder said the distillery “lacks the fakery of a visitor centre”, while Owen Pritchard of the Architects Journal wrote that it “combines flamboyancy with thoughtfulness”.

However the Guardian’s Oliver Wainwright critiqued the building for projecting “the heritage it never had” – referencing the gin brand’s rejection of its real history for a new picturesque setting.

“And now, like some nouveau-riche celebrity, it has moved into a dream home in leafy Hampshire,” he said, before describing the new interventions as being “Heatherwick’s trademark fireworks”.

“A pair of coppery claws appear to burst through the windows of the old mill hall, splaying out in a sweeping bulge to form two gigantic glass bell-jars, before plunging into the river,” he added.

“It is as if the copper gin stills, now housed inside the old mill, have sprouted aerial roots, extending their tentacles outdoors in a bid to take over the site.”

Laverstoke Mill opened to the public last week. Read more about it in our earlier story, or read our interview with Heatherwick, where he said the project was an opportunity to celebrate British industry.