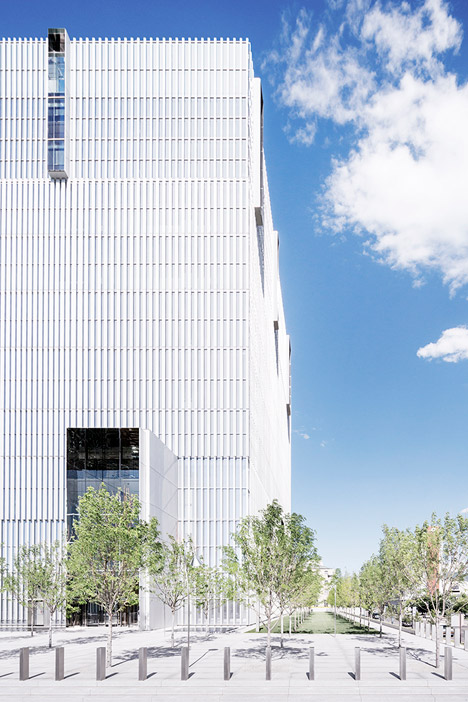 White vertical fins clad the glazed exterior of this Salt Lake City courthouse by Thomas Phifer and Partners, shading the interior from direct sunlight without restricting the views from inside (+ slideshow).

The project was named as one of the recipients of the American Institute of Architects’ Institute Honor Awards earlier this week.

A raised landscaped garden creates a public access route between the new and old buildings, which are both set back from the street to comply with a federal security requirement.

The simple form and a limited number of visible openings gives the courthouse a robust and solid appearance that is tempered by glazing behind the vertical louvres, offering expansive views out from the interior.

“The design emanates from our search for a form that is strong, iconic, transparent, and metaphorically egalitarian as a symbol of the American judiciary system,” said the architects in a statement.

The aluminium fins are angled differently to reflect their position on the facade in relation to the sun’s orientation. Their gently reflective anodised finish is intended to combine with the glass and give the building’s surfaces a luminescent quality.

Ten courtrooms for the District Court of Utah, 14 judges’ chamber suites, and offices for the Clerk of the Court, the United States Marshals Service, United States Probation, and other federal agencies are all provided within the 10-storey structure.

Eight further courtrooms can be accommodated by rearranging the existing layout. Parking is also provided on two underground levels.

The courthouse faces a major crossroads. Steps arranged around this corner lead up to the terrace on which the building is situated.
A tall opening in the facade marks the main entrance, which is internally clad with reflective panels.

The architects said the building’s interior “celebrates daylight as an intrinsic quality of both public and individual space,” using a simple palette and reflective surfaces – including shallow, pebble-filled ponds – to optimise the light entering through the large areas of glazing.

The three-storey entrance lobby is filled with natural light from full-height windows. This brightness is complemented by the use of warm-toned wood flooring and wall panels.

A cylinder made from timber battens encloses a spiralling staircase with open treads, which ascends to meet walkways that project from the upper levels.

Centrally-located public elevator lobbies are illuminated by daylight filtering down from skylights 10 storeys above. Public waiting areas that extend in opposite directions from the atrium create a bright axis that stretches from one edge of the building to the other.

The courtrooms are positioned at the corners, where natural light and views filter through the facade, designed to bring “clarity and context” to the proceedings within.

Photography is by Scott Frances.