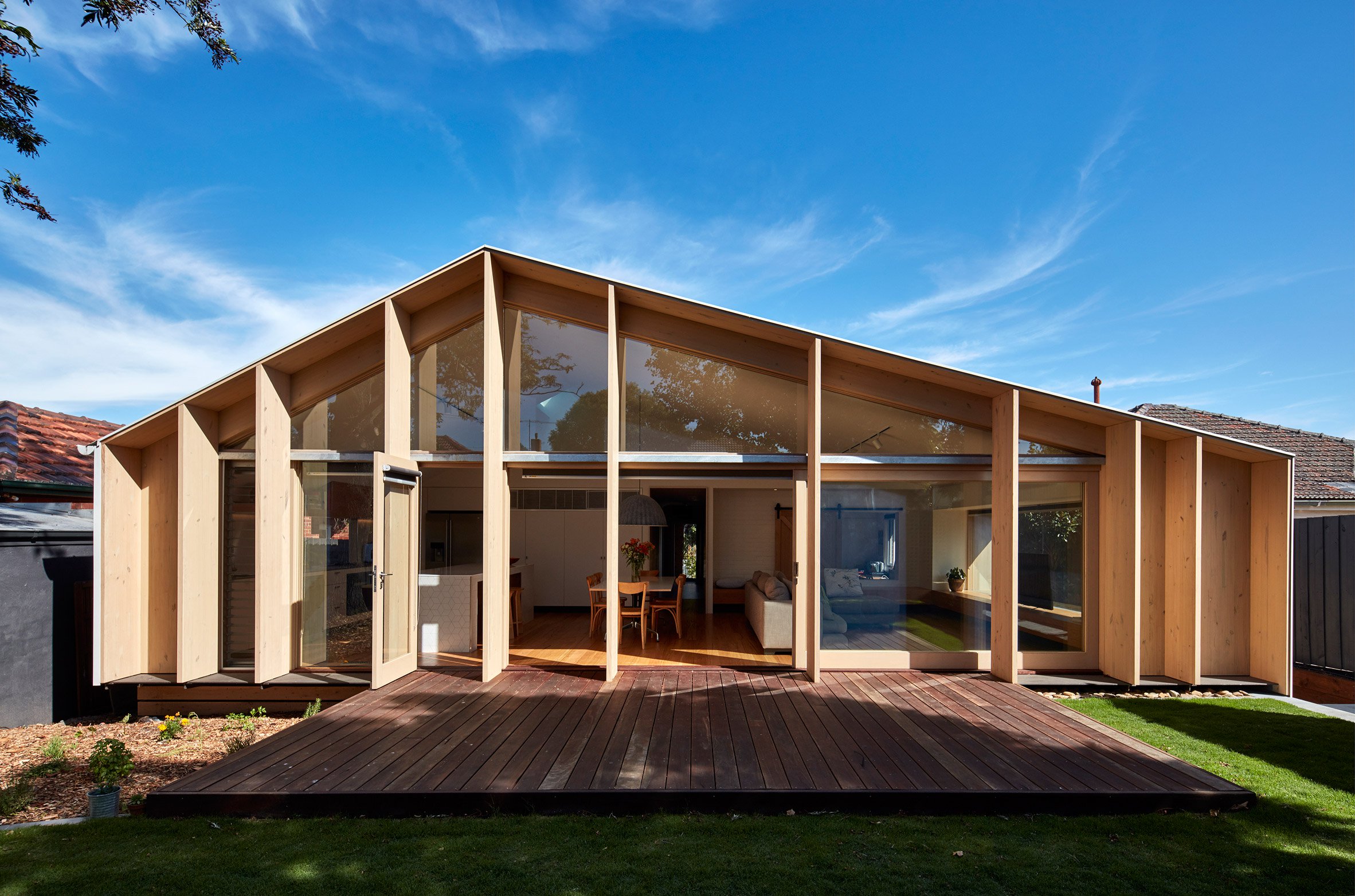 Warc Studio has reinterpreted the typical lean-to extensions of many Melbourne houses with this timber and glass addition to a home in the city’s Oakleigh suburb.

Australian firm Warc Studio was tasked with renovating a typical 1960s property and developing an extension to contain new living spaces with good connection to the garden.

The extension’s main structure is made from laminated timber and incorporates deep fins which help to shade the glazing from the summer sun.

The form of the new structure is influenced by the mono-pitched lean-to extensions commonly added to similar properties around the city, but its unusual scale and materiality lend it a unique character.

“In this instance, two mono-pitched roof forms with differing gradients were juxtaposed to form new living areas that span across the rear of the house and open to the garden,” said the architects.

By combining the two angled roofs to form a single surface, the architects created an asymmetric gable that is filled with glass to provide extensive views out.

The brief called for a design that minimises material usage and construction costs, providing an efficient and coherent addition to the familiar suburban housing typology.

Warc Studio also suggested that the use of a pitched roof means the extension’s surface area is approximately 12 per cent less than that of a flat-roofed alternative, which helps create a more compact building envelope.

As a consequence, less material was required to construct the new addition and the volume of space that needs to be heated in winter and cooled in summer is also reduced.

The use of strong, locally sourced laminated pine for the structure and fins meant that a minimal amount of costly structural steel was required. The wood is simply stained and left in its natural state, without the need for additional lining materials.

Rooms within the existing house have been refurbished and reconfigured around a new central corridor to improve circulation and provide views from the entrance straight through to the garden.

“Spatial interconnectivity is facilitated through a plywood chute that connects and delineates the original house from the new additions,” said the architects, “as well as a sliding panel that connects the new living areas to the study.”

The new living space contains a lounge with a low wooden bench running along two sides, a central dining area and a kitchen featuring a tiled island unit.

Sliding and hinged glass doors connect the open-plan room with a decked outdoor space sheltered beneath the roof’s overhang. An operable window at the apex of the slanted ceiling can be opened to help release hot air in the summer.

Photography is by Aaron Pocock.