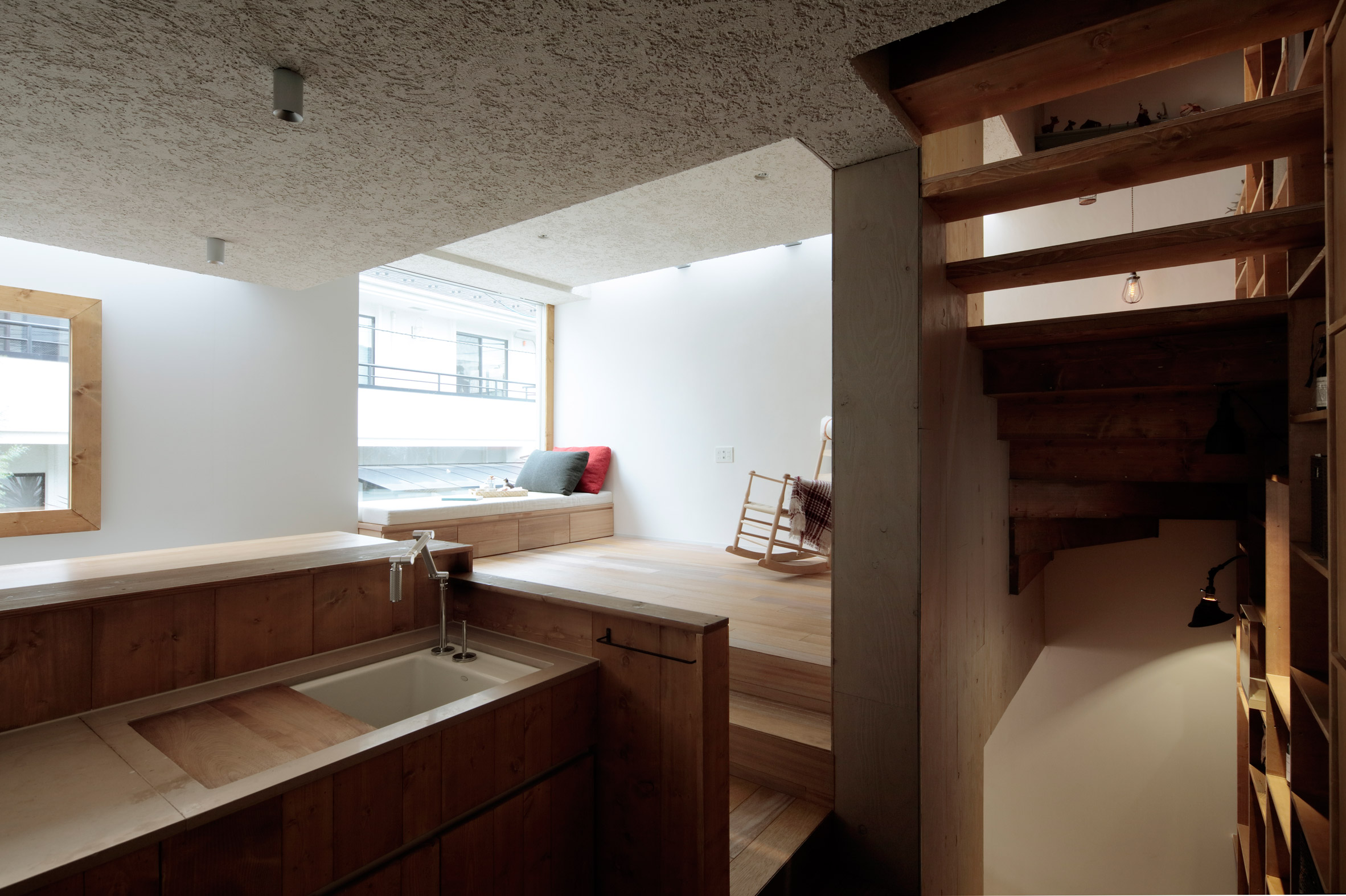 The staggered stack of boxes that form this family home in central Tokyo contain a set of spiralling, interconnected rooms.

The house was designed for Daisuke Ibano, a member of the team at local architecture office Fujiilab, whose founder Ryosuke Fujii worked on the project with Ibano and architect Satoshi Numanoi.

Ibano had previously been living in a 50-year-old property on the compact plot, but decided to remove the existing building to make way for a larger house suited to the needs of his growing family.

The original building was dark due to the proximity of neighbouring buildings, so the intention with the new house was to create brighter and more liveable spaces arranged in a continuous vertical configuration.

“Because the site is not so large, it was necessary to provide four floors to ensure the area required for the family to live,” Ryosuke Fujii told Dezeen.

“Since the up and down movements are awkward, I made it possible to move continuously by arranging the rooms in a spiral skip floor. The composition of the internal space appears in the external form.”

Planning regulations dictated that the building’s facade should be set back from the street, which informed a design that expands outwards above this level to achieve more space inside.

Because the plot is hemmed in by other buildings on three sides, any openings needed to be incorporated into the north-facing elevation or the roof to retain privacy.

By shifting sections of the north facade outwards, narrow windows are able to be incorporated on the sides and tops of these staggered volumes.

“In this project, we created irregularities on the exterior of the building and incorporated light and air from the shifted surface,” said Fujii.

“Such a shape with irregularities is different from the shape of ordinary houses, but it is a shape as a prototype of houses in urban residential areas,” he added.

The building’s complex form was achieved using a geometric steel framework that allows the stacked series of spaces to remain uninterrupted by internal columns.

A bedroom and entrance hall are accommodated on the ground floor, with stairs leading up to a kitchen, lounge and dining space featuring built-in furniture on the next level.

Further short sets of stairs ascend past a wall of open shelving towards two more rooms on the floors above, which each have their own terraces looking out towards the city.

The final set of steps leads onto a roof terrace surrounded by a mesh balustrade fixed to the exposed steel framework.

Rather than using doors and corridors that would take up precious space, changes in level perform the function of separating the different rooms.

“The purpose of this building is housing, but we wanted to create a public space,” said Fujii. “Because this house is built in the city, a good relationship with the city leads to the relationship of the house’s interior.”

“For that reason, I decided to have a helical continuous space where all the rooms were connected without a door,” he added. “And with wind and light entering from various places thanks to the shifted volume, we arranged a comfortable place like everywhere in the city.”

Another aim for the interior was to provide a variety of spaces with unique characteristics, despite their contiguous arrangement.

This was achieved by using the same materials for floors and ceilings throughout the different rooms, while the walls in each space are different and matched to the demands of these spaces.

The render applied to the ceilings also matches the facades, providing a sense of consistency between the interior spaces and the external treatment.

Photography is by Koichi Torimura unless otherwise stated.