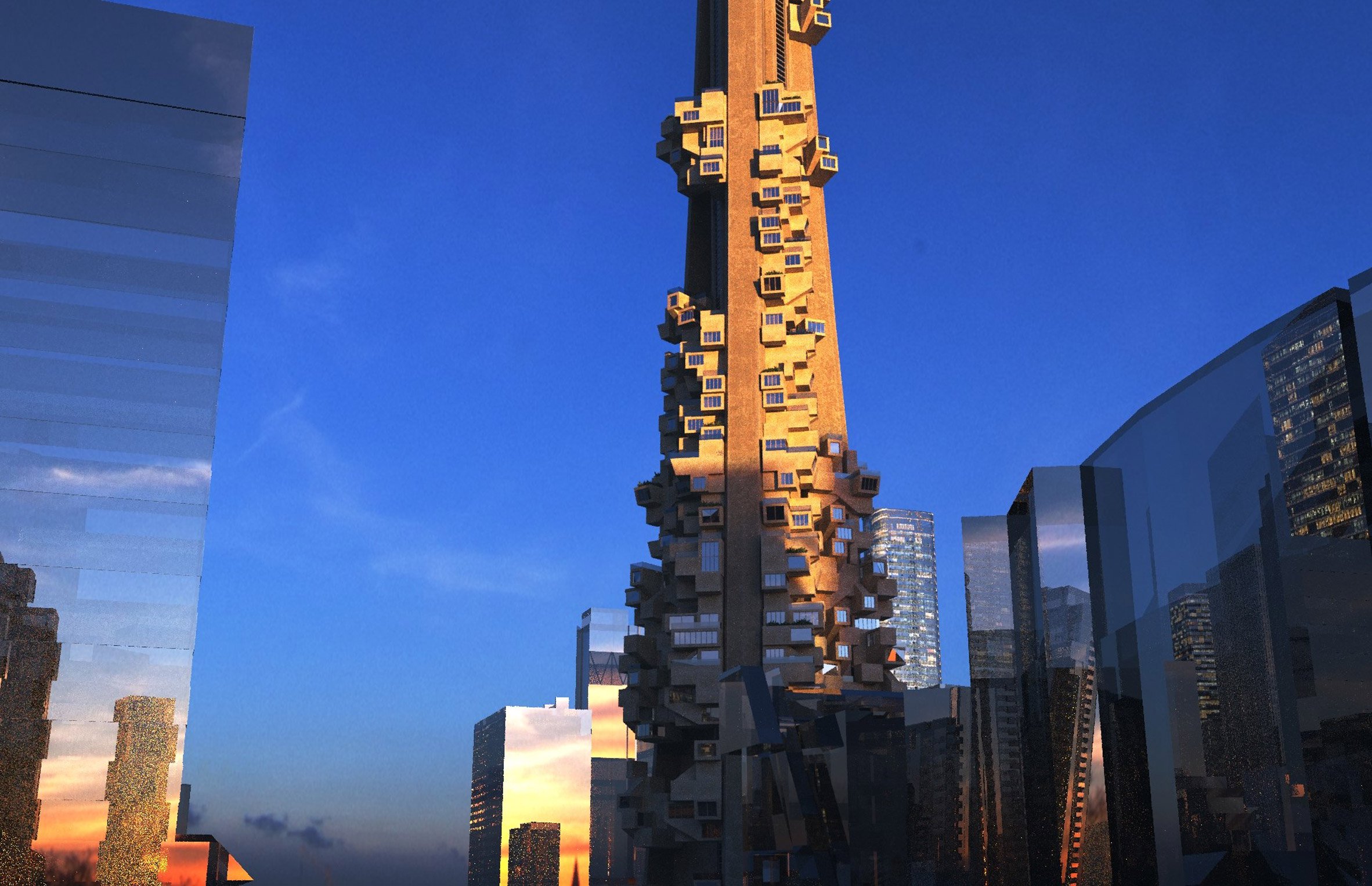 Clusters of parasitic apartment units cling to the sides of the CN Tower in this conceptual proposal by Toronto studio Quadrangle.

The modular wooden residences would nestle between the giant concrete fins of the 553-metre-tall communications tower – one of the world’s tallest, and a major tourist attraction.

“Quadrangle saw an opportunity to reinvigorate the tower with desirable market condominiums, in an excellent location with unparalleled views, while maintaining the building’s existing and successful functions,” said the studio.

The idea involves hanging the prefabricated cubes between the wind-shielding wings of the structure, drilling supports into the concrete.

Each of pods could be designed to order, with a choice of sizes and layouts. This variety would create a pixelated effect up the sides of the tapered host tower.

Quadrangle proposes constructing the units from cross-laminated timber (CLT), which is created by gluing smaller pieces of wood and pegged as the architectural wonder material of the 21st century.

“CLT’s combined lightness and strength ensures that the units can be ‘hung’ between the wind-shielding ‘wings’ of the CN Tower,” said Quadrangle.

“Since CLT buildings are designed in panels that are made in factories, and snapped into place onsite, the construction will be quick and safe, having no negative impact on tourist traffic.”

The structural wood panels would also be exposed on the interiors, and inhabitants would be ensured views across Toronto and Lake Ontario through large windows.

It is unclear how the residents would reach their apartments, particularly the ones higher up, however renderings show staircases linking multiple units together.

The CN Tower was designed by local firm WZMH Architects and completed in 1976 as a TV and radio communications mast. It boasts a 360-degree restaurant and multiple observation levels, including a glass-bottomed deck for more adventurous visitors.

The tower held the title of the world’s tallest freestanding structure for 34 years, until it was overtaken by both the Burj Khalifa in Dubai and the Canton Tower in Guangzhou.

“Quadrangle’s proposal reinvents the landmark and in so doing also reinvents the tower as a symbol of Toronto’s ingenuity and progress,” said principal Richard Witt.

“We hope that the design’s versatility inspires similar projects on other large-scale freestanding developments globally, increasing the value they bring to their home cities and environments.”

Parasitic proposals for other iconic structures around the world include a latticed extension to the upper deck of the Eiffel Tower in Paris and a giant curvaceous greenhouse on top of Philip Johnson’s New York State Pavilion.