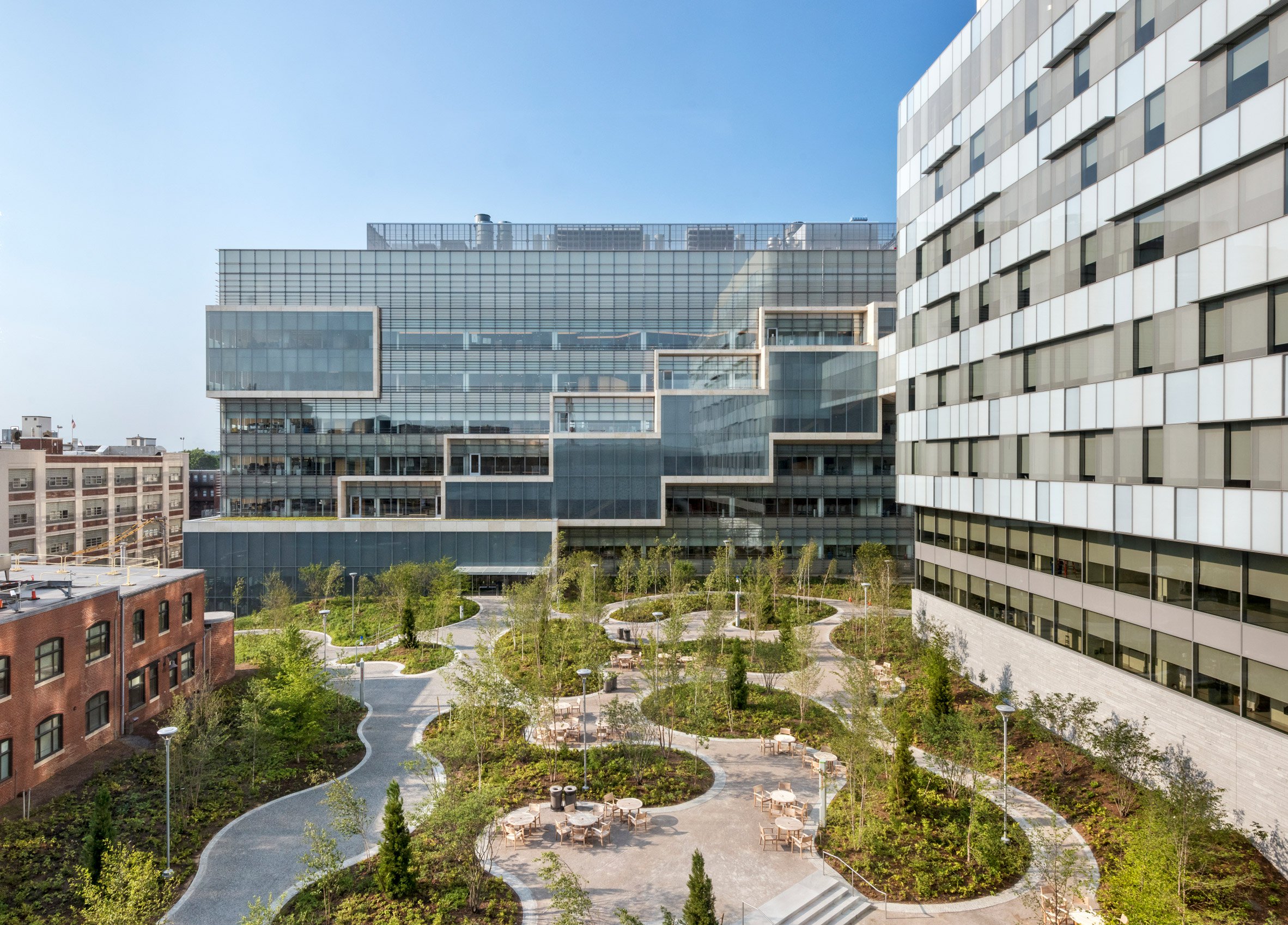 The complex, called the Novartis Institutes for BioMedical Research, is located on a busy street in Cambridge, near the campus for the Massachusetts Institute of Technology. Encompassing more than 800,000 square feet (74,322 square metres), the complex brings together over 1,000 pharmaceutical researchers.

“The overarching goal for the project was to create an ideal work environment for research, with specific emphasis on increasing the exchange of knowledge and levels of interdisciplinary collaboration,” said US-based CannonDesign, which served as the project’s architect of record.

The urban complex consists of two connected buildings, which wrap a courtyard designed by Michael Van Valkenburgh Associates, a Brooklyn-based landscape architecture firm. An underground parking garage is hidden beneath.

Occupying one corner of the campus is the 181 Massachusetts Avenue building, conceived by designer Maya Lin in association with New York architecture firm Bialosky + Partners Architects.

L-shaped in plan, the building consists of two distinct volumes: a tall, rectilinear portion that contains laboratories, and a lower, curved portion that houses offices, meetings rooms, and an auditorium.

“The design of the building maintains the human scale of the adjacent buildings at street level while creating a taller space for research labs set back from the street,” Lin explained on her studio’s website.

The lower portion is wrapped with a distinctive screen made of light-coloured stone. Its appearance was inspired by “microscopic views of organic coral or bone structure”.

The curtain wall behind the screen is composed of five different hues of glass that mathematically correspond to the openings in the stone brise-soleil.

“Conceptually I felt this translation of nature through a systematic and mathematical process reflects back on how science and medicine take materials found in nature and, through scientific analysis and research, transform them into new medicinal compounds,” Lin stated.

Lin’s building is linked to 22 Windsor Street, a research facility designed by Toshiko Mori‘s New York studio – whose impressive portfolio includes a cultural centre in Senegal and an extension to a Marcel Breuer-designed house.

“Social spaces are expressed by large stone frames, enlivening the southern facade in a dialogue with the campus, community and city,” states a description on Mori’s website.

For the interior of the two buildings, the team focused on creating flexible spaces with minimal columns and broad sight lines. “Specialised functions and tech zones are grouped around core laboratory equipment to further eliminate visual obstacles in the labs,” said CannonDesign.

To help inform the interior design, the team created a full-scale, experimental mockup in a nearby vacant space to test new organisational and physical models.

“This resulted in research environments that were applied to this complex, as well as to many other existing Novartis research facilities worldwide,” the team said.

Photography is by Esto Photographics Inc and Anton Gras.