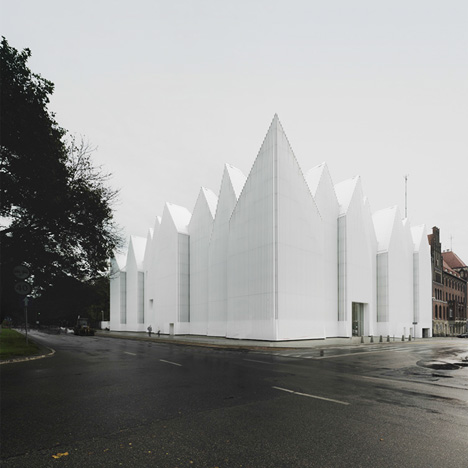 This concert hall in Poland by Spanish studio Barozzi Veiga features ribbed glass cladding and a spiky roof, giving it the appearance of an icy crown (+ slideshow).

Barcelona-based Barozzi Veiga won a competition to design the Szczecin Philharmonic Hall for the coastal city of Szczecin, in north-west Poland, where it sits on the site of another auditorium that was destroyed during the Second World War.

The most noticeable feature of the structure is its zigzagging roof profile, made up of a series of sharply pitched gables. This gives the appearance of many smaller conjoined buildings.

“The serial modulation of the roof permits the integration of the new building within the fragmented urban profile of the city,” said the architects.

The tall structure also features a translucent ribbed-glass facade. At nighttime, lights within the spaces give the building a white glow.

The 13,000-square-metre venue comprises a symphony hall with a capacity for 1,000 concert-goers, a smaller venue for chamber music with space for 200 spectators and a range of meeting rooms for conferences and exhibitions.

Inside, a spiral staircase with thick white white balustrades rises from one side of a large foyer. It leads to the upper floor concert halls, the first of which can be seen in the raised white box to one side of the stairs.

Positioned off the foyer, which is used to host events, there are a number of administration offices at ground level.

Upstairs, the ceiling and walls of the symphony hall are textured with angled triangular panels that give the surfaces a folded appearance. Covered in gold leaf, the fragmented pieces contrast with the simple form of the exterior and lobby.

“In accordance with the central European tradition of the classical concert halls, decoration becomes ornament and function,” said the team.
“The exterior austerity and the simple composition of the interior circulation spaces contrast with the expressiveness of the main hall.”

Photography is by Simon Menges, unless specified otherwise.