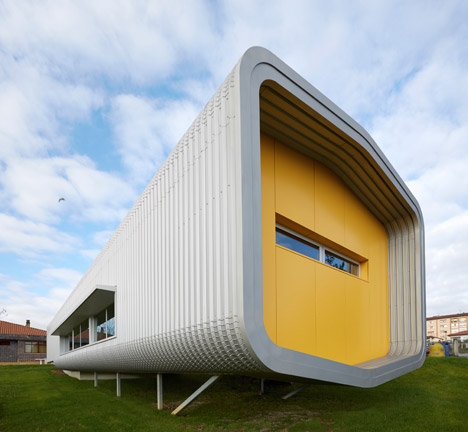 This school canteen in the northern Spanish city of Oviedo was prefabricated in a workshop five kilometres from the site so that it could be built within the client’s tight 90-day deadline (+ slideshow).

Guillén Lafuerza Dining Hall was designed by Spanish architect Miguel Ángel García-Pola Vallejo for a primary school in Oviedo, which needed a new kitchen, dining hall, storage space and toilets before the start of the new school year.

“The brief was to design an energy-efficient building to house these functions, with a reduced budget and rapid execution of just 90 days,” García-Pola Vallejo told Dezeen.

To do this, he designed the 226-square-metre building as four modules, which were prefabricated in a workshop and transported to the school on the back of a truck, where they were craned into position and joined together. The prefabrication took 45 days, and the on-site construction took another 45 days.

Other prefabricated buildings featured recently on Dezeen include an affordable summerhouse in Portugal and a prototype house in Australia that produces more energy than it uses.

The single-storey Guillén Lafuerza Dining Hall is clad in silver-coloured sheet metal with a ridged surface, and features curved edges to give it a softer appearance.

The ridged surface and curved edges also allow water to run off the side of the building naturally, without the need for gutters, in order to reduce the need for maintenance.

“From a construction point of view, sheet metal is an inexpensive, low-maintenance material, offering quick assembly,” said García-Pola Vallejo. “And from a design point of view, it can be used on the walls and roof to create a continuous outer skin, which emphasises the building’s sculptural quality.”

Both ends of the building are finished in a contrasting yellow colour, which is continued inside across all the surfaces.

“I chose a single colour to create a unitary enclosure, so that the building offers a protective environment for the children,” García-Pola Vallejo said. “It temporarily isolates them from the outside, and especially from homework.”

“Yellow was used because it is a warm colour that contrasts well with the grey of the concrete, the steel cladding, and the green prairie landscape of the Asturias region.”

The open-plan layout features a kitchen at one end, a dining hall in the middle, and storage and toilets at the other end. Durable and low-maintenance materials were used throughout, with polyurethane resin flooring, and sandwich panels for the walls, made from Formica laminate and rock-wool insulation.

Windows were set closer to the floor on the southern side of the building to frame views for the children rather than adults.

The building has two entrances. One is at the end near the toilets and storage area, which adjoins a covered walkway leading directly from the school. The other is on the building’s northern side, near the kitchen, which allows food and cooking equipment to be carried easily from an adjacent car park.

The building cost roughly €270,000 (£192,000) to construct, and García-Pola Vallejo says it could be adapted for different uses in the future, or even transported to a different site.

“Considering the limitations of the available land, the building was designed so it could be extended or adapted for other functions, and mechanisms are planned so that the structural modules can be dismantled and transported,” he said.

Photography is by Marcos Morilla.