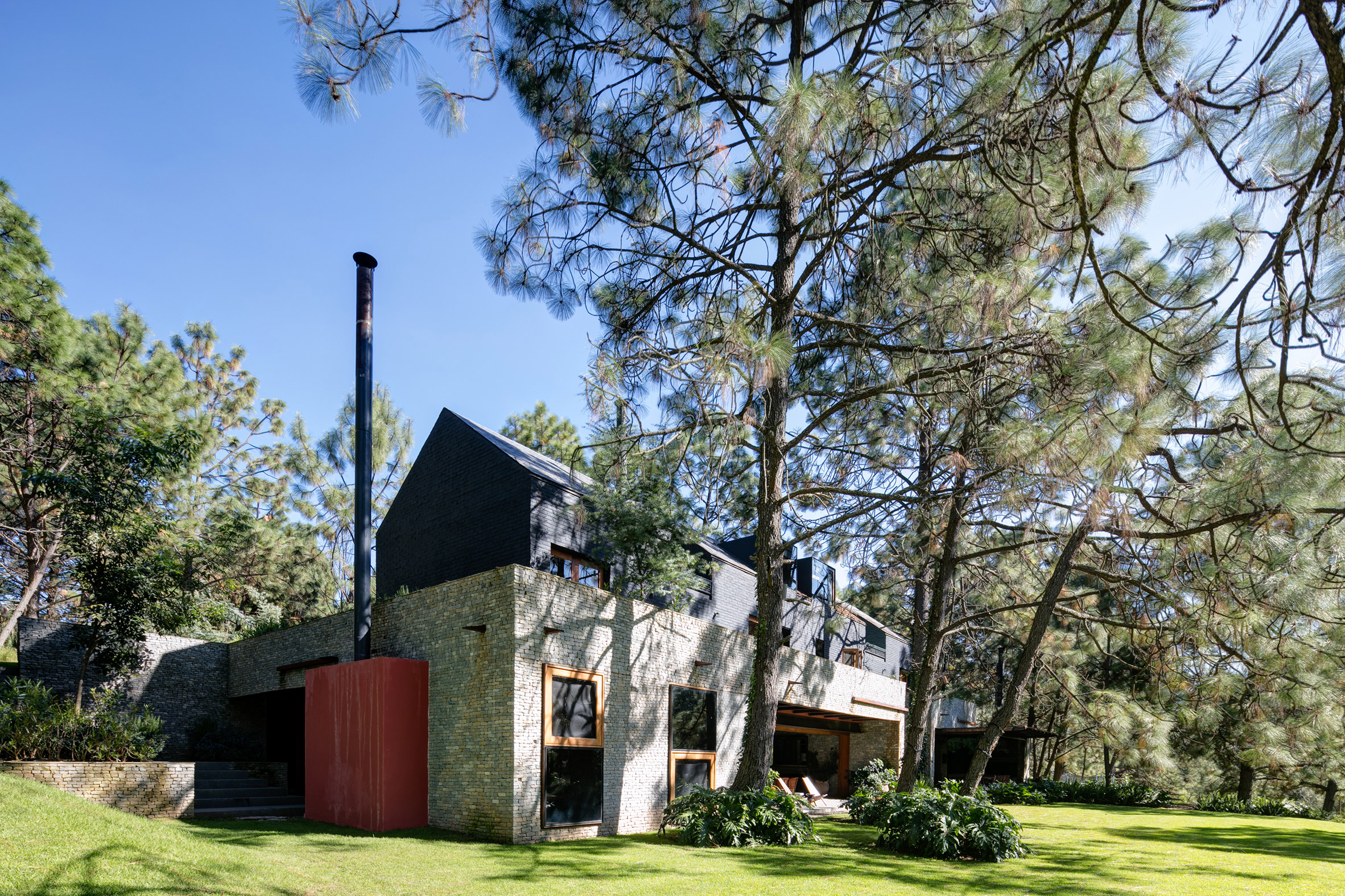 Mexican studios André Escobar Arquitectos and Taller Arquitectónica have completed a pitched-roof home that sits atop a stone plinth in the woods of Tapalpa, a small town in the western state of Jalisco.

“Each family has their own private areas, but shares the social areas such as the dining and living rooms,” said André Escobar Arquitectos,

The home is characterised by a monumental stone plinth, which forms a base for the dwelling. This large feature wraps around the home, creating an elevated terrace.

The second and third storeys sit atop this feature, and contrast it with their black brick cladding and steeply pitched roofs.

“Sharp geometrical structures and a notable contrast between materials and textures were the result of a meticulous design process,” said the firm.

Visitors enter on grade with garden, through a brightly lit foyer that contains the home’s main staircase.

On the ground floor, expansive glass doors open the home’s common areas to the outdoors.

The intermediate level contains four bedrooms, and as many bathrooms. Each room enjoys a private tapanco – a type of mezzanine that roughly translates to attic.

During construction, which completed in 2013, the architects chose to preserve the site’s lush surroundings.

“The topography and numerous trees on the property were a major challenge for the design, as a decision was made to preserve the site intact,” the studio said.

“The natural slope allows the private rooms on the second floor as well as the common spaces on the ground floor access to the gardens.”

The choice of stones from Galicia, Spain, forming the plinth is due to the material’s high thermal mass, which retains heat during cooler times of the year.

“Artificial heating sources were not easily accessible,” said the architects.

The interiors of the home display a modern, yet rugged palette of stone, local tile, and wooden accents.

“The interiors are a modern take of traditional elements, expressing a cozy yet refined environment,” André Escobar Arquitectos said.

Other project in Mexico include a vacation home with solid masonry walls and a dramatically sweeping roof located outside of Mexico City and a duplex that combines a home and studio for architects in Queretaro.

Photography is by Lorena Darquea.