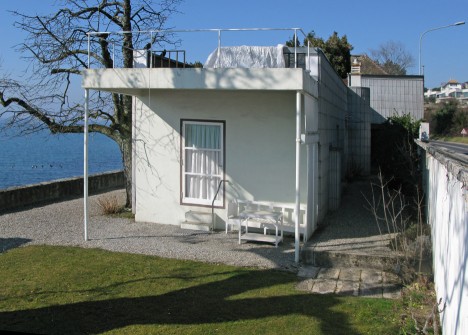 Heritage body UNESCO has added 17 projects by 20th-century French architect Le Corbusier to its list of internationally significant architecture sites, including the Unité d’Habitation housing in Marseille – arguably the most influential Brutalist building of all time (+ slideshow).

The 17 architectural sites that have been added to the World Heritage List are spread across seven countries. They were built over 50 years by the Swiss-born French architect, who has become one of the Modernist movement’s most admired and controversial figures.

They include the Complexe du Capitole in Chandigarh, India, where Le Corbusier collaborated with his cousin and fellow architect and designer Pierre Jeanerret to build and furnish an entire government city.

The National Museum of Western Art in Tokyo, Japan, the House of Dr Curutchet in La Plata, Argentina, and the Unité d’Habitation in France are among the other buildings on the list.

An earlier application to add 19 Le Corbusier buildings to the list was deferred by UNESCO in 2011.

UNESCO said that the Le Corbsuier buildings it had chosen to inscribe to the World Heritage List “reflect the solutions that the Modern movement sought to apply during the 20th century to the challenges of inventing new architectural techniques to respond to the needs of society”.

“These masterpieces of creative genius also attest to the internationalisation of architectural practice across the planet,” it said.

See the 17 projects in chronological order:

The home Le Corbusier designed for his parents is located on the eastern shoreline of Lake Geneva.

A single-storey block measuring just 60 square metres, its interior is fitted with movable partitions and fold-out furniture to make the most of the plan – which Le Corbusier designed ahead of finding the ideal site.

“I boarded the Paris-Milan express several times, or the Orient Express. In my pocket was the plan of a house. A plan without a site? The plan of a house in search of a plot of ground? Yes!” he said of the design process.

Le Corbusier was commissioned to design this housing development in Bordeaux for the industrialist Henry Frugès.

Considered the first architectural expression of Purism, Le Corbusier worked with his cousin Pierre Jeanneret on this Parisian residence for the Swiss banker Raoul La Roche.

The building, which comprises two white blocks joined to create an L-shaped plan, is partially raised on cylindrical pilottis and now operates as a museum.

Le Corbusier’s first commission abroad came from the Belgian artist René Guiette, who asked the architect to design a studio and residence in Antwerp.

The simple white block with a flat roof is punctured by gridded glazing, and a small balcony projects from its six-metre-wide facade.

Le Corbusier, Walter Gropius and Bruno Taut were among the 17 European architects who contributed to the experiment.

The two buildings Le Corbusier designed were intended as models for mass housing, and feature modular construction methods and mobile partitions to allow a flexible use of space.

A key work of the Modernist movement, Villa Savoye has a top-heavy construction supported by row of slender columns.

The residence, designed by Le Corbusier with Pierre Jeanneret, is crowned by a solarium encased by curving walls and features sliding glazing at ground level.

Immeuble Clarté contains 45 apartments of varying dimensions contained within a block made from standardised components that give the facade a regimented appearance.

Rows of linear balconies front onto the street, and a shared garden is located on the roof.

This apartment block features full-height gridded glass walls that overlook the Parc des Princes sport grounds on one side and the Bois de Boulogne park on the other.

Le Corbusier used the upper floors of the block as a studio in later life.

An experiment in collective housing, this bare concrete block is often considered the founding work of Brutalism.

Elevated on sculptural pilotti and topped by a roof garden, the Unité d’Habitation contains 337 apartments ranging from studios to homes for families with up to 8 children.

On the building’s opening in 1952, Le Corbusier described it as “the first manifestation of an environment suited to modern life.”

Le Corbusier was commissioned to design the Duval Factory following the destruction of an existing workspace during the second world war.

Deep concrete frames fitted to the facade of the Duval Factory express the building’s sections, which features a combination of double and single height spaces.

Commissioned as an extension to the residence and clinic for the surgeon Pedro Domingo Curutchet in Argentina, Maison Curutchet is one of only a handful of projects designed by Le Corbusier in North and South America.

The prefabricated design is based on the Modulor, an anthropometric scale of proportion developed by the architect in response to the movement of the human body. Le Corbusier died in 1965 at the age of 77 while swimming in the sea nearby.

Designed as part of the masterplan for the Indian city of Chandigarh, the Complexe du Capitole comprises three buildings – the Legislative Assembly, Secretariat and High Court.

Concrete was moulded into gridded, scalloped and columnar formations to create the complex geometry and patterns, which are highlighted with brightly coloured paintwork.

Le Corbusier gave this concrete cultural centre in Loire a scooped roof that projects into a dramatic point above an angled facade.

While the flanks of the building are solid concrete, its two glazed facades feature primary coloured stripes.

This vast board-marked concrete monastery contains 100 bedrooms, a library and refectory as well as separate halls of work and recreation for the Dominican order near Lyon.

Gridded and linear patterns on the building’s facade express its internal structure, which features chunky concrete columns and exposed beams.

Built to house a collection of Impressionist painting and sculpture, the concrete building is set in a park overlooking Tokyo.

A textured box forming the upper storey of the museum is raised on slim concrete columns over a smaller glass-fronted base.

Considered by many critics to be Le Corbusier’s finest work, the Notre Dame du Haut chapel features a huge curving board-marked concrete roof that shows a break away from the functionalism of the architect’s earlier buildings.

Vandals broke into the chapel in 2014, breaking a hand-painted, glass window signed by Le Corbusier and prompting calls for better protection of the site.