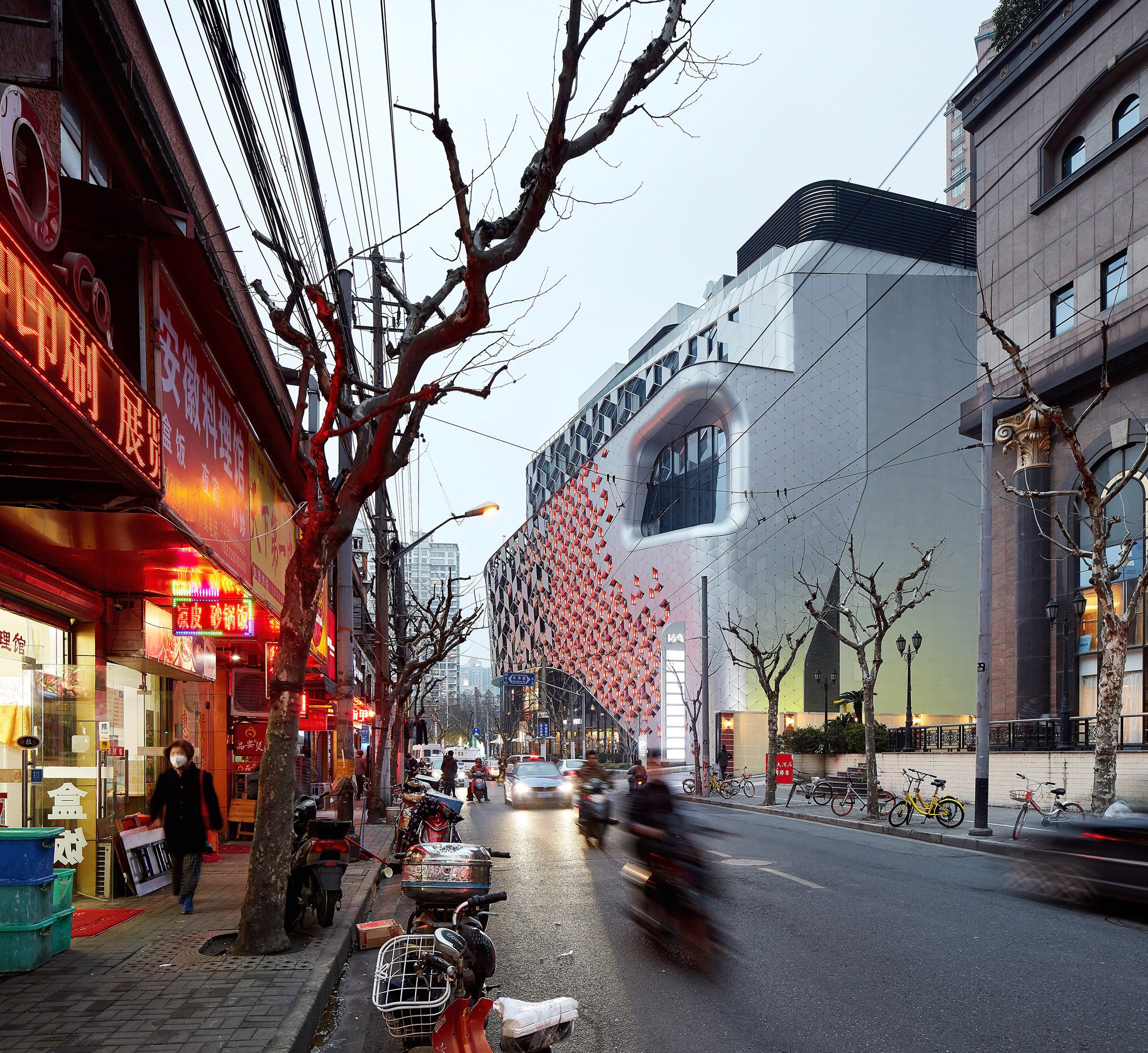 Tessellating diamonds create an intricate grid of solid and void across the facade of this shopping centre that Dutch firm UNStudio has completed in Shanghai.

Called Lane 189, the seven-storey shopping centre is located in the heart of the Chinese city, in the Putuo District – an area with a diverse mix of old and new buildings.

In response, UNStudio designed a contemporary building, but gave it a facade intended to reference “old Shanghai” – in particular the patterned screens that front traditional properties.

This resulted in a facade of diamond-shaped panels that follow a hexagonal grid. Some of the aluminium-coated panels are bigger than others, and they are organised in a seemingly random pattern to create a surface that is partially opaque, and partially see-through.

“The design incorporates elements of ‘old Shanghai’ through geometry, pattern and materialisation, and combines these with a contemporary urban experience, thereby creating a destination with a distinctly Shanghai feel,” said the design team.

“A gradient transition from bigger to smaller facade components regulates the exposure of the inside to the outside, and enhances the main entrance of the building.”

To exaggerate the contrast between solid and void, RGB lighting is installed behind the panels to create a variety of visual effects at different times of day, or for special occasions.

Led by architect Ben van Berkel, UNStudio is based in Amsterdam. The firm has had several projects in China in recent years, including a shopping centre in Wuhan covered in silver balls and a series of pavilions for the Qingdao Horticultural Expo.

Like those two projects, as well some others still in the works, Lane 189 is fairly organic in shape. The majority of its surfaces are curved, and its large windows feature heavily rounded edges.

One particular window wraps around the corner of the building, and is sunken far back from the facade. UNStudio describes it as one of the building’s “urban eyes”.

“These urban eyes simultaneously create large display platforms for products whilst providing balconies with views to the surroundings,” said the team.

Inside, the building contains a mix of shops, restaurants and office spaces, interspersed with small kiosks. These are located on curved floorplates and organised around a large atrium, lit naturally via a generous skylight.

“When seen from below, the rounded plateaus resemble a cohesive, layered organic structure, however when looking down from above the programmes of the plateaus are revealed,” added the team.

Van Berkel founded UNStudio in 1988 with partner Caroline Bos. The studio ranked at number 55 on the inaugural Dezeen Hot List.

Its most prolific projects include the Erasmus Bridge in Rotterdam, the curvaceous new train station in Arnhem and the nearly complete Canaletto tower in London.