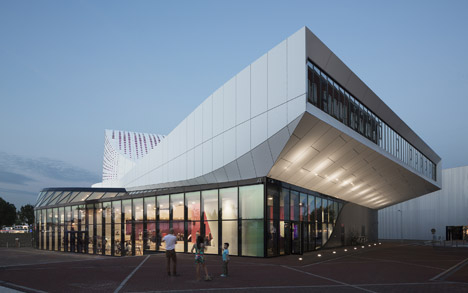 UNStudio has completed a theatre in the Dutch town of Spijkenisse, featuring a spotty facade that glows purple at night and an auditorium with a ceiling that moves to improve acoustics (+ slideshow).

Opening tomorrow, the 5,800-square-metre Theatre de Stoep was designed by UNStudio to provide the town with two new auditoriums that can be adapted to host plays, cabaret, musicals, concerts and dance performances.

UNStudio’s design involved combining both the drama of the theatre with the social aspects of a local community facility, by creating a generous multi-level foyer that functions as both an entrance lobby and a meeting place.

Studio founder Ben van Berkel explained: “In contrast to today’s mediatised culture, theatre offers the participatory experience of the live event, often appropriately referred to as ‘liveliness’ – the ‘magic of live theatre’, understood as the strange, elusive energy between audience and performer, the community forged together and the momentary collaboration necessitated by the live event.”

The foyer is made up of several interlinked spaces that accommodate cafe and restaurant areas, as well as entrances to the two auditoriums. Bold colours help with navigation, while clerestory windows have been added to flood the space with natural light.

“The vertical foyer becomes a pivotal point in the social functioning of the theatre, a ‘stage’ for the visitors and a dynamic focal point surrounded by viewpoints on different levels,” said Van Berkel.

The smallest of the two halls has enough room for 200 spectators, while the larger hall can accommodate just over 650 people, with over a third of the seats on the balcony.

To ensure versatile acoustics in the main auditorium, UNStudio designed a ceiling made up of mobile elements that can be lowered or angled to suit different volumes. These are complemented by the acoustic panels that line the walls.

A grand staircase leads to the entrances of the two hall, with a curved handrail that also flows into worktops and custom furniture elements.

Externally, the building has a curved body designed to prevent disturbing the natural wind flow to the nearby Nooitgedacht –  a mid-19th-century windmill that has become a local landmark.

The upper sections of the walls are clad with two layers of aluminium. The outer layer is perforated with rows of circular openings with inset LED lighting, giving the building a purple glow at night.

In the early stages of the project UNStudio collaborated with engineering firm Arup to develop the building’s distinct curved form without overcomplicating the structural framework. A Building Information Modelling (BIM) system was utilised, which will be used for the maintenance and management of the building in the future.

Photography is by Peter Guenzel, apart from where otherwise stated.