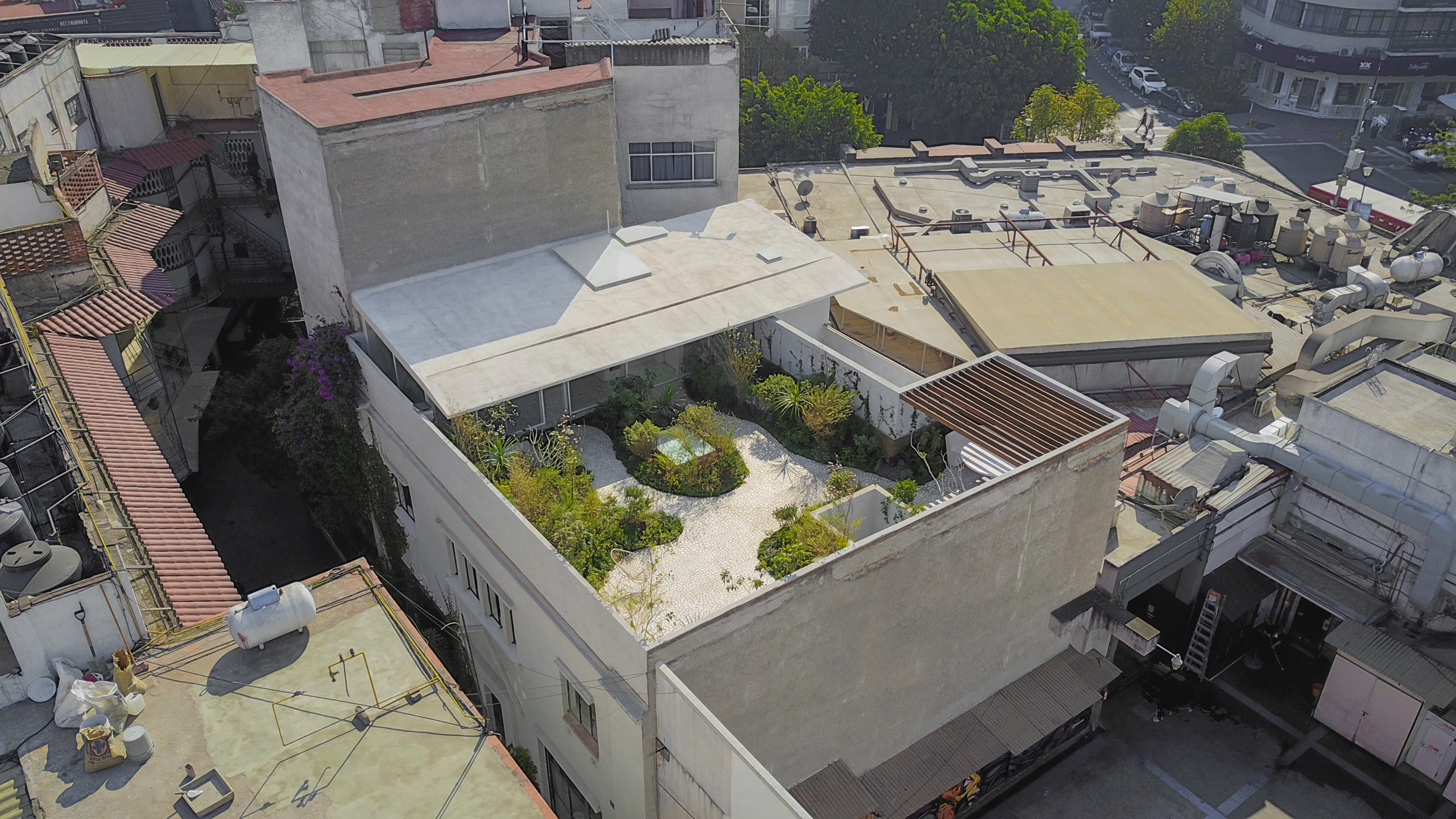 Architecture firm Zeller & Moye has outfitted an old residence with a sprawling rooftop garden, serving as a getaway within a crowded neighbourhood in the Mexican capital.

Previously a dilapidated Art Deco townhouse, Case Verne stands in the centre of the Mexican capital and was overhauled by the firm – which has offices locally and in Berlin – for a small family.

The home opens onto a narrow lobby that retains the character of the original building. Service rooms and a small courtyard hide behind an open doorway at the back. A pink marble staircase opposite the entry dog-legs up to a living space.

The ground level was previously divided into two small apartments. By joining the spaces, and extending the home onto the roof, the architects opened up the layout.

A hallway on this level wraps around a central living room, while providing access to spaces organised along the edges of the residence.

The kitchen takes up the northwest corner, while a dining room and a lounge are located to the northeast. A stairwell, and two bedrooms at the corners of the south wall follow in clockwise fashion to complete the plan.

A courtyard separates the two bedrooms, while another sits between the kitchen and one of the bedrooms at the west edge. Both feature glazed walls facing the interior, and along with three other skylights, help to brighten the home.

The architects replaced the floors of the first level with dark-stained wood. A staircase made of the same material winds up to the converted rooftop.

The upper level accommodates a volume that takes up a east quarter of the plan, while vegetation sprawls across the remainder.

A bathroom and a master bedroom within the roof extension flank the staircase on either side. Floor-to-ceiling glazing spans three of the volume’s walls.

A white concrete roof hangs over the structure, providing shade to its two garden exits. Zeller & Moye /a> designed the verdant rooftop as a small retreat from the surrounding city.

“The location of the plot hidden in the centre of an urban block gave us the opportunity to create a secluded place to live,” cofounder Christoph Zeller told Dezeen.

“The idea for the garden was to offer a living condition as though one were living in the countryside outside the city.”

The landscaping of the roof evokes the natural flora of Mexico City. The architects used plants native to the region and well suited to the climate.

“The garden is exclusively composed of local Mexican species, which are able to resist strong sun, but also dry periods and heavy rain,” said Zeller. “The plants are representative of the wild landscape around Mexico City.”

For the path that winds through the garden, and for the floors of the extension, Zeller & Moye used white marble pebbles that once lined the shores of rivers of lakes found in Mexico city.

The walkway leads to different areas for leisure, carving out plots of vegetation that are shaped to make the terrace seem expansive.

“The garden was designed to exaggerate its size through curved lines, shaped hills and dense planting, so that it would appear more spacious,” the architect said.

“There are niches for seating, sunbathing – even the bathroom has its own small terrace with plants offering privacy.”

Several other Mexico City houses incorporate flora, including a residence raised to allow pants to grow beneath it and a home with verdant walls and terraces.

Photography is by Omar Muñoz unless stated otherwise mentioned.