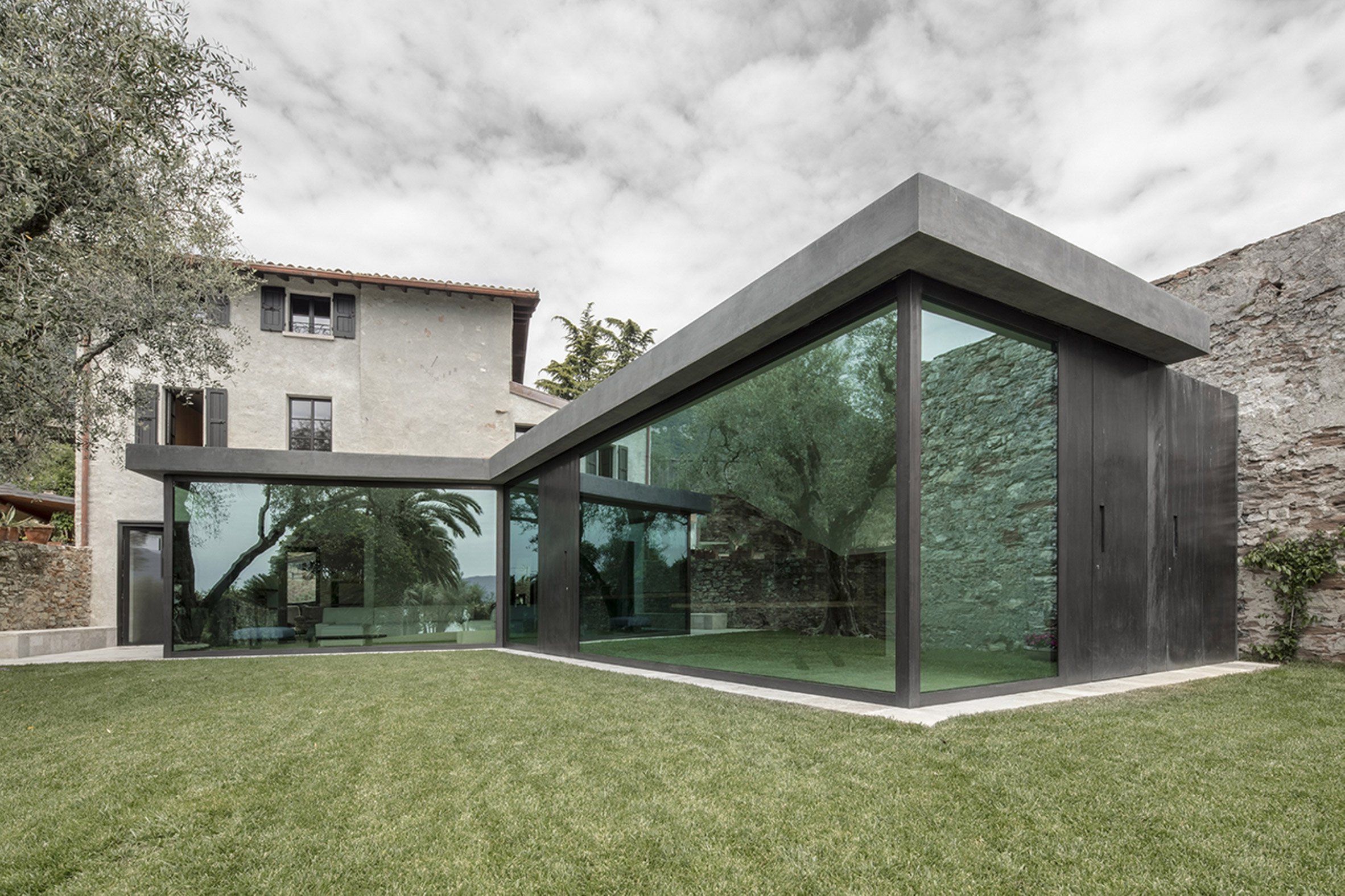 Architecture studio Bergmeisterwolf has completed an extension to a house on the shores of Italy’s Lake Garda, featuring glazed walls that disappear into the ground to open the living area up to the garden.

The client for the project – an economist from Vienna – wanted an addition that would add value to and improve the functionality of a villa originally constructed in 1680.

Bergmeisterwolf, which is based in South Tyrol in the very north of Italy, was tasked with expanding the home’s floor area and optimising the connection between the internal spaces and the large garden.

“We needed to design an extension tuned with the existing building in a way that they both enhance each other,” said the studio.

A new single-storey volume constructed from black-dyed concrete adds a contemporary counterpoint to the existing house, which the client and his family use as a holiday home.

The textured surface of the concrete complements the plaster facades of the main house, while new windows, shutters and door frames are finished in a similar dark tone to provide further consistency between the two parts of the building.

An external concrete staircase provides a route from the garden to a terrace on the roof of the extension, which can also be reached from the upper floor of the house.

The entire ground floor has been opened up to create an uninterrupted living space, including a kitchen with an island unit and integrated dining table that extends out into the garden.

Huge double-glazed panels with bronze frames each weighing around 1.5 tonnes line the edges of this space.

To create a seamless connection with the outdoors, the walls slide down into underground slots, creating a space that is open to the elements but sheltered beneath the cantilevered canopy of the roof.

“When all the glass walls disappear, the room becomes an exterior space under a shadow,” Bergmeisterwolf told Dezeen. “The garden goes inside the house and vice versa. It feels like being outside.”

Stone slabs that form the flooring of the ground floor continue beyond the facades to extend the living areas into the garden.

On one edge of the property, the flooring forms a path leading to a swimming pool situated in the garden between a lemon orchard and century-old palm trees.

The studio’s interventions also involved introducing a new staircase that connects every level of the house. The base of the staircase is a monolithic concrete volume linked to a wooden structure with open treads.

Previously completed projects by the studio include a monolithic concrete house with a balcony set in an angular cutout and a contemporary take on the traditional log cabin.

Monolithic concrete house by Bergmeisterwolf emerges from an Alpine hillside