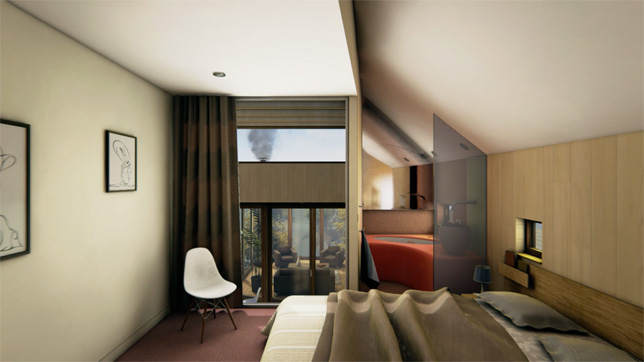 Dezeen and MINI Frontiers: architects will soon be walking clients through digital models of their designs, says 3D visualiser Olivier Demangel, who built a virtual replica of a house he saw on Dezeen to showcase the technology (+ movie).

“Virtual reality will become an essential tool for architects,” Demangel says in the movie.

“This technology is going to be so precise, you’re going to be like a magician. You’ll be able to change the world around you like a god.”

Demangel, who works for London 3D imaging company IVR NATION, wanted to get architects excited about the possibilities of virtual reality technology. To do this, he created a digital walkthrough of Ty Hedfan, a house in Wales designed by architects Featherstone Young, which was featured on Dezeen in 2011.

“I saw the photographs and plans on the Dezeen website and decided to create a replica of this house for a virtual reality experience,” he explains.

Demangel has never visited the actual house, but claims his 3D model, which people can explore using a virtual reality headset like Oculus Rift, is almost identical to the real thing.

Related story: Virtual reality will be “more powerful than cocaine”

“Photos of some rooms were missing, but because I had the plans I would say that it is about 90% accurate,” Demangel says. “I spoke with the architect who designed this house and he was very happy with the reproduction. I never went to this house and maybe I will never go.”

Damangel believes architects in future will use virtual reality from the beginning of the design process, which will enable them to digitally inhabit their designs and make changes on the fly.

Virtual reality could also help an architect get their client to buy into their design, Demangel says.

“It could be the best way to show a building to the client, because the client is going to be able to walk inside the project even if it is not existing yet,” he explains.

Demangel used 3ds MAX to build a 3D model from the plans and photographs he found online and then imported the data into Unreal Engine, a common suite of development tools used for video game design.

“It’s a mix of graphics, lighting, music, programming — like video games,” he explains. “At the end you get this complete interactive experience for architects.”

This movie was filmed at Dezeen’s office in London. Additional video footage is courtesy of IVR NATION.

Dezeen and MINI Frontiers is an ongoing collaboration with MINI exploring how design and technology are coming together to shape the future.

The post Virtual reality will allow architects
“to change the world like a god” appeared first on Dezeen.