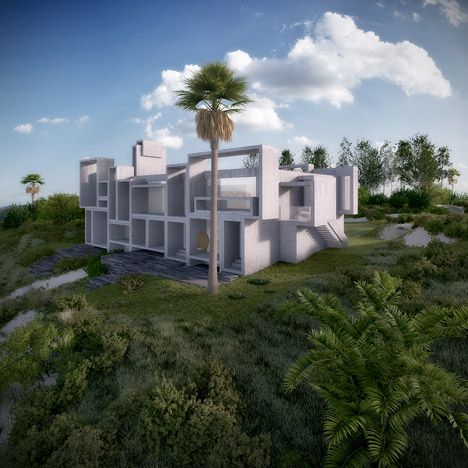 Located in the coastal community of Ponte Vedra Beach, the Milam Residence caused “a sensation” when it was built in 1962, according to the Paul Rudolph Foundation.

Commissioned by a young lawyer named Arthur Milam, the multi-storey dwelling drew attention for its dramatic beachside facade – a patchwork of square and rectangular frames that recall the grid-like paintings of Piet Mondrian.

The facade was intended to serve as a brise-soleil, helping to shield the home from the intense Florida sun.

Huh, who runs a consulting firm called DANHÜH, became interested in the Rudolph project in 2002 when he was asked to contribute to a publication on Brutalism.

“By chance, I found a perspective sketch of the Milam Residence that was different from the existing house,” he told Dezeen.

He continued to research the project, finding ample material on the final design including CAD plans and sections, but little documentation of the original proposal.

He did discover, however, that Rudolph’s initial scheme called for using poured-in-place concrete. That proved to be too expensive for the client, so Rudolph slightly modified the design so the house could be built using concrete masonry units, or CMUs.

“Rudolph originally specified poured concrete for the Milam family, but smooth-cast sand-coloured concrete blocks for walls turned out to cost only half as much: $88,000,” said the foundation.

Huh didn’t end up working on the Brutalism publication but his interest in Rudolph and the Milam Residence persisted. “As a fan of Rudolph and specifically that house, it was something I wanted to revisit,” he said.

This year, he set out to create a series of drawings that honour the architect’s original design.

In addition to showing a building made of smooth, poured concrete, the images reveal a few other differences between the original and realised design.

“The living room space is larger in the unbuilt version because there is no roof deck, and the transverse end walls were simplified in the final built version,” Huh explained. “Two areas where I took more liberties from the available documentation was with the use of the board-form finish on the interior concrete walls and adding a grass paver system for the driveway.”

The Milam Residence marked the last of Rudolph’s series of well-known Florida houses. Between 1946 and 1962, he designed roughly 80 contemporary homes in the southern US state, and he was a key figure in the region’s Sarasota Modern design movement. He died in 1997.

The Milam project was completed one year before the 1963 opening of Rudolph’s controversial Art and Architecture Building at Yale, regarded as one of the earliest examples of Brutalist architecture in America.

“I greatly admire Rudolph’s ability to evoke genuine surprise and wonder,” said Huh, when asked about his interest in the architect. “I think it comes from his formal inventiveness and rigour, along with my appreciation for concrete.”

Born in South Korea, Huh worked for several firms after earning an architecture degree from SCI-Arc in 1997. In 2011, he launched DANHÜH, which provides conceptual and schematic design services for architects and developers.

Huh said he aims to recreate other original designs by noted architects.

“I plan to release additional images in the future, along with my own design intervention: a single-family house utilising the same building footprint, but updated with current technology and materials,” he said.

“If it works out, I’d like to expand it into a case study series called ‘Footprints’ involving other architects I find interesting or admirable. Someone once told me imitation is a perfectly valid way to learn something. I suppose I’m taking that to heart.”

The post Visual artist recreates Paul Rudolph house as the architect intended it to be appeared first on Dezeen.