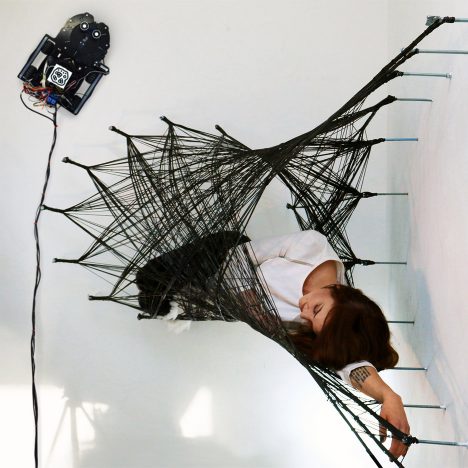 Researchers at the University of Stuttgart have devised a new method of construction using mini robots that they claim is cheap, fast and can create structures that would otherwise be impossible to build (+ movie).

Instead of using one or two large robots, the university’s Institute for Computational Design (ICD) has developed a carbon-fibre fabrication method that involves many small robots. These look like Roomba vacuums and could fit inside a single suitcase.

The agile robots, which climb walls and ceilings, work in concert to pull fibre filaments across a space, creating a structure onsite.

“We are only at the very beginning of exploring the true architectural potential of this fabrication system,” said architect and ICD director Achim Menges. “But we are convinced that its main advantage is that you can build entirely new structures that would be impossible to materialise otherwise.”

“Pragmatically, smaller robots will be cheaper and, in working collaboratively in larger numbers, faster than the established systems,” he told Dezeen.

The ICD developed the project with the Institute for Building Structures and Structural Design (ITKE) – its partners on the carbon-fibre Elytra Filament Pavilion currently on display at London’s V&A museum – as well as graduate student Maria Yablonina, on whose research the work is based.

The project constitutes a form of “swarm construction” – a fabrication method, predicted to be common in the future, that involves swarms of small robots working together.

Titled Mobile Robotic Fabrication System for Filament Structures, the project features robots that use sensors and suction to travel across any horizontal or vertical surface, including existing architecture.

Their size and mobility means they can reach areas and create structures that large industrial robots cannot.

“Working with many small robots rather than one or two big ones extends the design space significantly and allows us to tap into the unique possibilities of filament structures,” said Menges.

“One can conceive more intricate, differentiated and larger architectural systems beyond the limits of the workspace and the reach of typical industrial machinery.”

The robots are able to travel up walls and across ceilings through the use of internal fans that create powerful suction, sucking them to any surface.

The next step will be to upscale the work by increasing the number of robots and their range of motion. Currently the robots must be connected to an external power source by a cable, which limits their application.

The ICD and ITKE have developed various building systems using carbon fibre, which Menges described as “architecture’s biggest untapped resource” in an earlier interview with Dezeen.

He claimed that combining digital technology with physical fabrication could lead to a fourth industrial revolution.

Menges’ team are using carbon fibre in long-span architectural roofs and advanced building envelopes. Their recent projects include a pavilion based on the lightweight shell encasing the wings and abdomen of a beetle and another inspired by a lobster’s exoskeleton, both created with large industrial robots.

Similarly, architect Neri Oxman argued that swarm construction would be the technology of the future construction site in an interview with Dezeen in 2013

“Transcending the scale limitation by using larger gantries can only offer so much,” said Oxman. “But if we consider swarm construction, we are truly pushing building technology into the 21st century.”