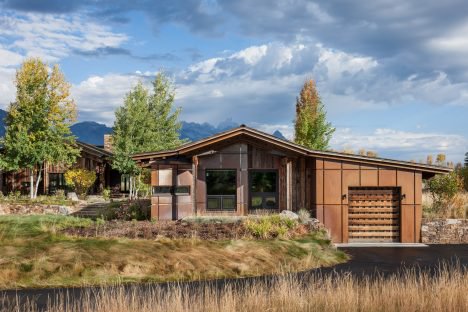 The Safir Residence is located in Jackson, a quaint ski town that serves as a gateway to two national parks.

The home rests on a flat site that looks toward the Teton Range to the north and Sleeping Indian Mountain to the southwest, and sits in the migratory path of indigenous elk.

The rural property contains a main residence and a detached guest house that total 7,500 square feet (697 square metres). A series of wooden decks – one of which features a hot tub – are situated along the exterior of the buildings.

Both structures are topped with pitched roofs, and are clad in salvaged wood and hand-fabricated weathering steel.

The metal panels were arranged in a way that reflects the home’s interior functions, and adds “rhythm and cadence” to the elevations.

To take advantage of vistas from the main home, the majority of rooms were positioned on an east-west axis. L-shaped in plan, the single-storey residence is divided into two wings.

A gently curved “gallery” leads to bedrooms and a common room in the eastern portion.

The western half contains the master suite, along with an open-plan kitchen, dining and living area. A window wall provides framed views of the towering mountains in the distance.

“Large expanses of glass with deconstructed glass corners ensures that the view capture is more than a static frontal portrait,” the firm said, adding that the glazing also ushers in daylight.

The guest house was placed to the south of the home, forming a courtyard between the two dwellings. This outdoor space “defines the entry to the main house, while sheltering it from southeasterly winds that are prevalent in wintertime”.

In both structures, the interior finishes mimic the rustic materials on the facade. The beams and decking are structural rather than ornamental.

A driveway was set four feet (1.2 metres) below grade – a move that helped maintain the “pristine view corridors”.

“Additionally, this placement allowed the garage to be placed lower in relation to the floor level of the main house, which reduced the apparent mass of the house when viewed from the south,” the firm added.

Other homes in the American West include a metal-clad house by Carney Logan Burke with a climbing wall on the facadem and a family dwelling by Will Bruder Architects that features exterior walls made of charred cypress and a roof sheathed in copper.