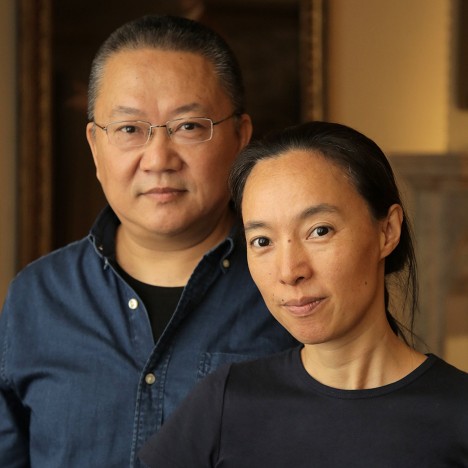 Chinese architects Lu Wenyu and Wang Shu will deliver the Royal Academy’s prestigious Annual Architecture Lecture tonight. Tune in at 6.45pm UK time to watch it live on Dezeen or on our Facebook page.

We will also embed the stream at the top of this post once the lecture starts at 6.45pm (BST).

Lu and Wang, who was awarded the 2012 Pritzker Prize, are the first Chinese architects to deliver the prestigious annual lecture.

They founded Amateur Architecture Studio in Hangzhou in 1997. Their best-known projects include the Ningbo History Museum – constructed using recycled bricks – and the China Academy of Art in Hangzhou.

The Royal Academy’s Annual Architecture Lecture takes place each year in its galleries in London’s Piccadilly to coincide with the institution’s Summer Exhibition.

It will be the 26th lecture in the series. The list of previous participants reads like a who’s who of contemporary architecture, with Norman Foster, Hans Hollein, Alvaro Siza, Peter Zumthor, Frank Gehry, Renzo Piano, Elizabeth Diller of Diller, Scofidio + Renfro, and Rem Koolhaas among the speakers.

This is the second year that Dezeen has been media partner for the lecture.

Last year’s lecture was given by Danish architect Bjarke Ingels, designer of this year’s Serpentine Galery Pavilion in Kensington Gardens, who revealed details of his proposal to turn the Battersea Power Station chimneys into giant Tesla coils.

Portrait of Lu Wenyu and Wang Shu is by Dezeen.