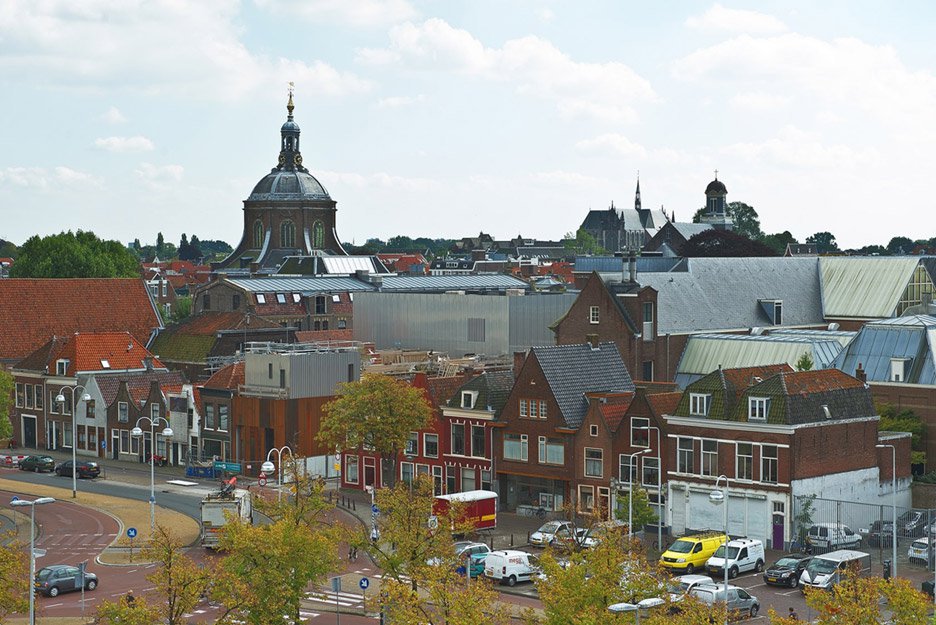 A+Awards: this concert venue in the Dutch city of Leiden is clad with panels of weathering steel and was awarded a 2016 Architizer A+Award.

Described by the architects as a “pop temple”, the venue includes a main hall that accommodates an audience of 700 and a smaller space that fits 200 people.

A historic factory building on Marktsteeg was renovated to serve as an entrance and foyer for both halls.

Vertical panels of Corten steel surrounded the majority of the new structure’s exterior, chosen to colour-match the factory’s brick walls.

Windows of different sizes puncture the rusted surfaces, which stagger in height along the length of the facades.

Contrasting grey metal clads portions of the building that protrude up from along the centre of the plan.

Inside the main hall, which has several tiers of balconies facing the stage, a dark monochromatic palette is broken with wood accents.

The renovated foyer features exposed brickwork and wooden rafters, above a large staircase that ascends up the centre.

“The theme of the design, for both the interior and the exterior, is the subtle combination of two opposites: old versus new on the one hand, and crude versus fine on the other,” said the architects.

Their stated mission is to nurture the appreciation of meaningful architecture in the world and champion its potential for a positive impact on everyday life.

Find out more about the A+Awards ›

Photography is by Arend Jan Hermsen and Petra Appelhof.