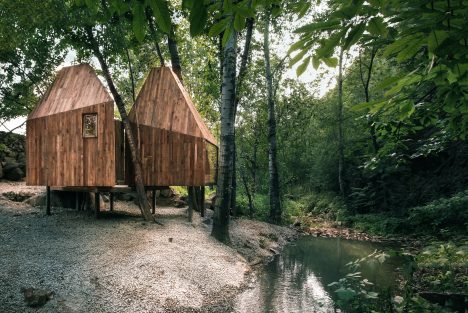 This pair of stilted wooden huts are set among poplar and hawthorn trees in a stretch of woodland at the foot of Mount Wuling in Beijing‘s Miyun District (+ slideshow).

They host a tearoom, a bedroom and bathroom, and are set on either side of a wooden deck facing a stream.

The walls and pointy roofs of the structures are clad in lengths of recycled timber to help them blend with their woodland setting.

The project, named The Treehouse, has no clients and was completely financed through internet crowdfunding – a public funding method growing in popularity among architects and designers.

“The building of Treehouse is about the subtle relationship between nature and inhabitation, as well as an exploration about how to achieve architecture in the era of internet,” explained the studio.

“At the end of 2015, we initiated a crowdfunding on the internet which had a great response in a short time,” added the architects.

“The practice is about inviting more people with the same interests into the process of design and construction and having fun with it.”

The tearoom features a full-height window framing a view of the stream to the north, while a smaller window points westward into the woods.

The inner walls of the tearoom are lined in plywood, and the floor is covered in tatami matting, a common material choice for Japanese-style tearooms.

While by day the space is used for tea drinking and illuminated by a skylight in the apex of the roof, at night it can be converted into a bedroom.

“The full-size glass to the floor brings the view of trees and cliff into the tearoom, where you can read, rest, drink and even encounter squirrels sometimes,” said the architects. “You can enjoy the shadow of trees and leaves as well as the sky if lying down.”

The second, smaller structure is used as a bathroom and is lined in warm-toned timber planks. It features angular fittings that slot into the structure’s irregularly shaped walls.

Doors are recessed into the walls of the huts to offer users a step up from the deck, which they partially rest on. The deck itself is stilted like the huts and can be accessed by climbing up on large rock.

The steel-framed structures were prefabricated in a factory, and transported and reassembled on site. Insulation in the walls, and an in-built heating system, means the huts can be used even during winter months, when the peaks of Mount Wuling are occasionally cloaked in snow.

Photography is by Sun Haiting of Roadside Alien Studio.

The post Wee Studio completes crowdfunded treehouses on the edge of a woodland stream appeared first on Dezeen.