“What to do with old houses?” 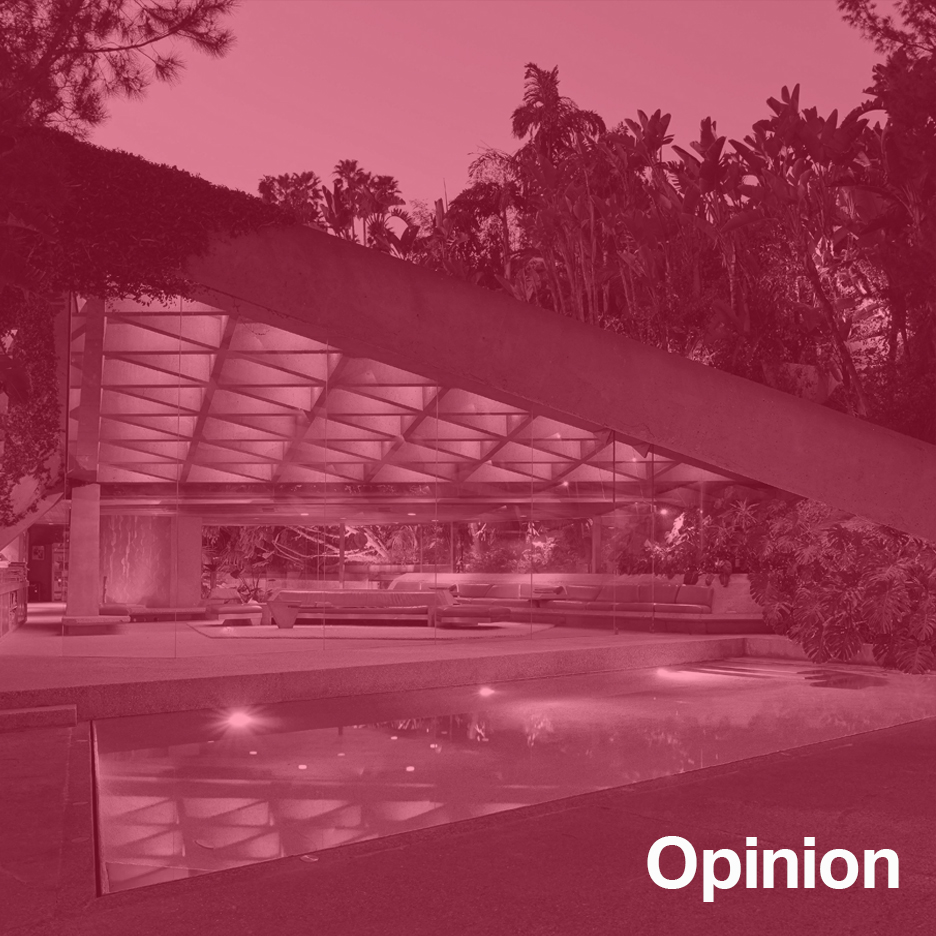 Soon thereafter my social media feed was peppered with photographs of the Sheats-Goldstein House (aka Jackie Treehorn’s house) – both the gravity-defying concrete roof over the very-sexy living room, and of course, the architecturally pornographic, glass-on-glass corner hovering over the Los Angeles skyline. I had skipped LACMA’s press event, however my own visits to the Bel Air house over the years had produced identical images. Lautner’s design prepares you for and then propels you toward that intoxicating, smog-tinged horizon. #nofilter.

Lautner’s design prepares you for and then propels you toward that intoxicating, smog-tinged horizon

It’s no wonder that the museum would so eagerly welcome the chance to use the residence to host public and donor events. The Instagrammable vista rounds out LACMA’s roster of photo-friendly sites, which also includes Chris Burden’s Urban Light and Michael Heizer’s Levitated Mass.

It also helps that along with an “infinity” tennis court, a 1961 Rolls-Royce Silver Cloud, and collections of contemporary art and fashion. Goldstein’s gift also includes the James Turrell Skyspace Above Horizon. This adds up to a trio of in-situ sculptures by 20th-century powerhouse artists under the museum’s purview. The 2004 site-specific artwork was designed in collaboration with architect Duncan Nicholson, who worked on a number of additions for Goldstein over the years, and features an in-floor bed for viewing the piece. (There’s a small wet bar just outside the entrance.)

“LACMA is honoured to care for, maintain, and preserve this house, as well as to enhance access to this great resource for architecture students, scholars, and the public,” said Michael Govan, LACMA CEO and Wallis Annenberg Director in a press statement. And while it is a boon for Angelenos and architecture fans that Lautner’s legacy will continue, Goldstein’s gift raises a larger question: What to do with old houses?

Los Angeles is peppered with iconic residences open to the public: houses Barnsdale, Eames, Gamble, Neutra VDL, Schindler, Stahl, etc. A few connections will get you into the choicest still-private abodes. Because the domestic sphere so dominates the city’s architectural history — and because the experimental utopia presented by the Case Study project is now for many so desperately out of reach — us design-types keep mental dance cards of thresholds crossed.

The display, maintenance, and programming of these sites is an emergent curatorial subgenre

Indeed the display, maintenance, and programming of these sites is an emergent curatorial subgenre onto itself. Just a couple weeks ago the Iconic Houses Network held its Fourth International Conference at the Getty Center to discuss house museums. Home directors, curators, and owners (often foundations and institutions) must take positions on how to open these sometimes fragile and ageing spaces to the public and also wrestle with issues of temporality.

These places come with past lives and complex histories that may have changed design intents over the years. Greene and Greene’s Gamble House in Pasadena, lauded as the epitome of natural Craftsman living is restored to precepts of that movement, yet has air conditioning. The verisimilitude of the Eames House’s “we just stepped out” approach to displaying the menagerie of the Eames’ folk art collections belies the 2011-12 conservation effort overseen by the Getty Conservation Institute.

For homes with long and rich histories, like the MAK Center for Art and Architecture’s 1921 Schindler House on Kings Road, there’s a difficult imperative to make the backstories visible without relying on docent didactics. Although MAK director Kimberli Meyer routinely curates exhibitions in the house — Austrian artist Erwin Wurm’s One Minute Sculptures is currently on view — the occasional performance piece perfectly articulates the ethos of the place.

In 2013, architects Frank Escher and Ravi GuneWardena’s opera Pauline told a personal history of Pauline Schindler through her letters. Staged in the house and courtyard, the performance presented her messy relationships, including her broken marriage to Rudolph Schindler and affair with a young John Cage. More recently, the first chapter of Brennan Gerard and Ryan Kelly’s dance piece Modern Living (a second chapter to be staged at The Glass House in May) effectively evoked the inherent tensions and experiments latent within a home designed for communal living.

In 2014, Sarah Lorenzen, director of the Neutra VDL House, and architect Bryony Roberts put together the symposium Intervention: Contemporary Artist and the Modern House to address the implications of this intersection of artist practice, architecture, and preservation.

In the introduction to the book documenting the event, Lorenzen plays devil’s advocate, suggesting that LA’s booming art scene doesn’t need any more cultural venues. But Roberts parries, “What these venues do that is really important is to create space for a type of creative practice that otherwise doesn’t have many venues. It enables people to make work that is about responding to a specific history.”

So what does this mean for LACMA and its newest acquisition?

The impact of Goldstein’s personality on the property is incalculable. He bought the house from Helen and Paul Sheats in 1972 and then worked with Lautner until the architect’s death in 1994 to add and adapt the design to his singular vision — including an all-glass sink so as not to block the view in the bathroom.

Later additions to the property by Nicholson, who had ties back to Lautner’s office, operate with a kind of loose fidelity to the original architecture, but certainly reinforce Goldstein’s own peculiar architectural showmanship. Inside, photographs of Goldstein posed with supermodels decked out in his signature fashion – Galliano leathers and Mick Jagger stance – line the walls and his multi-hued collection of wide-brimmed hats makes Jackie Treehorn’s white leisure suit seem a bit conservative.

In discussing the future of the house, Michael Govan said: “We are excited to collaborate with other arts institutions on events that speak to Jim’s interests and that connect and reach across creative disciplines – architecture, film, fashion, and art.” And certainly over the years the house has played home to fashion and film shoots, as well as artistic interventions, such as French artist Xavier Veilhan’s 2013 Architectones installation.

But it would seem that LACMA would need to maintain a connection to those elements outside of traditional disciplinary taste in order to stay true to the intent of the house.

Govan and the museum are in enviable position compared to other house museums, many of which struggle economically just to keep up basic repairs and mount exhibitions. One hopes that the combination of the Goldstein’s house and LACMA’s curatorial might will lead to some risky, even frisky, programming featuring combinations of Los Angeles’ emergent cultural scenes. The result would honour the rather oddball legacy of a rather oldball house. The death of Lautner and Goldstein’s hillside masterpiece would be if LACMA simply tidied up the old house for a round of trustee cocktails.

Mimi Zeiger is a Los Angeles-based journalist and critic. She is the West Coast editor of the Architects Newspaper and has covered art, architecture, urbanism and design for a number of publications including The New York Times, Domus, Dwell, and Architect.

The post “What to do with old houses?” appeared first on Dezeen.