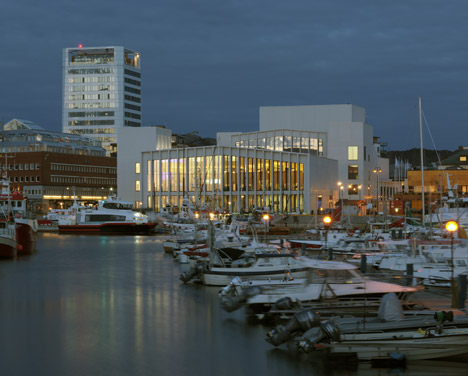 White concrete surfaces vary from matte to polished on the walls of this library and concert hall, completed by London studio DRDH on the waterfront of Bodø, Norway (+ slideshow).

The project to design the new £110 million cultural centre was won by DRDH, run by Daniel Rosbottom and David Howarth, in 2009.

The buildings, together named Stormen (Storm), occupy two opposing urban blocks next to the harbour – the last plots to be developed in the city centre.

“The road that runs between the buildings is the one that arrives from the south of the country and leads to the ferries out to the islands, so the new buildings become a kind of gateway to arrive in the centre,” Daniel Rosbottom told Dezeen.

The concert hall is located on the plot furthest from the harbour, while the library is located between the hall and the seafront.

From the harbour, the two buildings seem conjoined, forming a cluster of white concrete blocks, with the fly tower of the concert hall at the centre.

The sea-facing facades of the buildings are fronted by a colonnade of alternating pilasters and windows, capped with pitched roofs.

“Whilst our buildings have monumental qualities, which we hope reflects their role in the city, they also continually adjust to address, or make space for their neighbours,” said Rosbottom.

“They also work hard to address the relatively small scale of Bodø, for example the bulk of the fly tower is consistently masked by the smaller tower-like elements that surround it – a trick learnt from the medieval fabric of the City of London.”

The buildings are clad in stacked white precast concrete panels, matte in some places or polished in others. “They hold the constantly changing light of the Arctic sky, so that they are ever changing in both their tone and reflectivity, ” said the architect.

By treating the buildings as separate urban blocks, they are designed to maintain the scale of the surrounding architecture while offering lots of frontage through which they can open up to the city. Both have two entrances on different sides, one of which leads to a new public space at the heart of the site.

“Central Bodø has gone from feeling like a town to having a sense of being a city. The new buildings offer it a focus and the densification of space, making new streets and public spaces that have transformed its character,” said Rosbottom.

In the concert hall building, the main auditorium – known as the Store Sal – and its accompanying fly tower occupy the centre of the plan, away from the perimeter to ensure it does not overshadow its neighbours.

Two smaller auditoriums sit alongside the Store Sal, and another above the foyer, while the front and back of house spaces wrap around these. The Store Sal can be transformed from a proscenium theatre to full symphonic hall by altering a series of moving panels.

The concert hall is accessed via one of two doors at each end of the lobby, which is made up of a series of connecting rooms. A grand staircase leads up to the main foyer – a tall galleried room with expansive views of the harbour.

“The concert hall creates an enfilade sequence of overlapping rooms which take the audience to one of the four venues,” Rosbottom told Dezeen. “The library is an open interior landscape, which relates to the scale of the actual landscape seen through the glazed facade to the harbour.”

The larger of the two volumes of the library sits against the harbour front and contains the two storeys of the adult library, while the upper storey houses a large double-height space beneath the pitched roof that looks out to fishing huts and moored boats.

The rear spaces of the library contain the other functions, with the ground floor hosting exhibition areas and a cafe that are accessible outside of visiting hours.

A three-level atrium with a large wooden staircase connects all areas of the library and the two entrances.

The principal materials chosen for the interior are neutral and manufactured through techniques of pressing – oak ply, terrazzo, calcium sulphate, felt.

On the opening weekend 10,000 people visited the Library, 20 per cent of the population of Bodø. “At the beginning there was a degree of scepticism from some people, although a lot of support too,” said Rosbottom.

“However as the buildings started to take shape the change in mood was palpable and now I think almost everyone is proud and excited. People have talked to me and my colleagues about a new future for them and for their children, of a city that feels like it has come alive.”

DRDH also developed the signage and wayfinding for the building with Oslo design studio Neue, designers of the new Norwegian passport and ID cards.

Photography is by David Grandorge.

The post White concrete cultural centre by DRDH
nestles up against a Norwegian harbour appeared first on Dezeen.