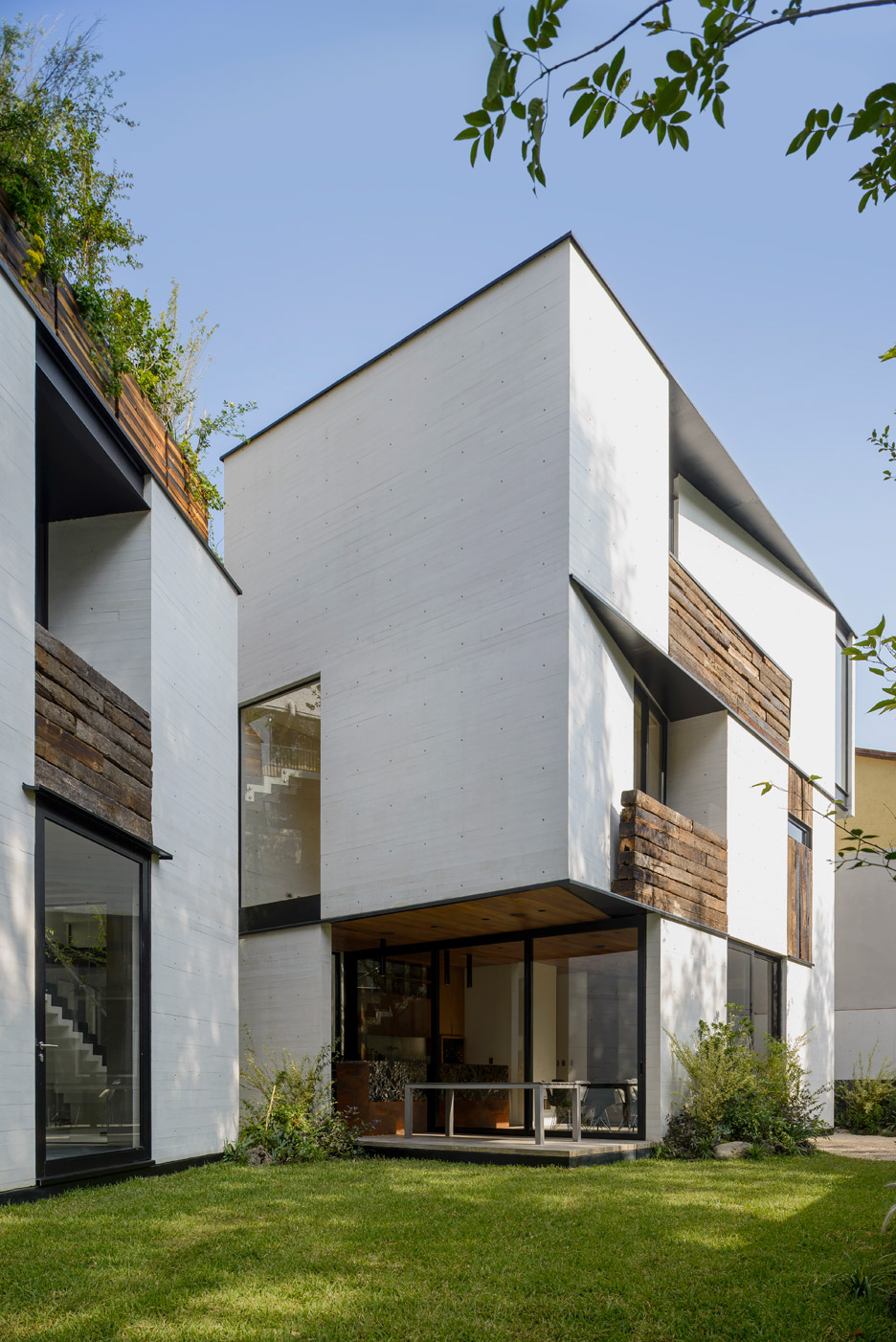 The trio of white concrete blocks that form this Mexico City home have been arranged around a shallow pool and a tree by architecture studio Taller Hector Barroso (+ slideshow).

Located just the west of the city, S House is a four-storey family home built on a site that is significantly lower than its surroundings – so ensuring plenty of daylight was one of the biggest challenges.

Only one side of the site is completely exposed, the other three are flanked by the rising landscape or by neighbouring houses.

Taller Hector Barroso responded by splitting the house up into three tall connected blocks, each positioned to receive as much sun exposure as possible.

This also allowed the creation of several terraces and gardens slotted in the spaces between.

The firm also avoided adding any of the main living spaces on the sunken lower level, which receives the least light.

“To avoid the house being buried by its preexisting limits, the garden floor plan elevates one level, leaving underneath the parking and services areas, and creating a base that allows a better position towards the sun and isolation towards the street,” said the team.

White concrete – created using a different blend of materials than regular concrete – provides the walls of all three structures, as well as additional elements like plant boxes and staircases.

Recent examples of other projects that use white concrete include Daniel Libeskind’s proposal for an art museum in Lithuania, a tiny chapel in rural Austria and three additions to a pair of 18th century French mansions.

In all cases at S House, the surfaces were cast against wooden boards to offer a rough texture. This is complemented by other exposed materials, including steel I beams and reclaimed wooden sleepers, which form balustrades.

The shallow pool at the centre of the site is visible from rooms on all three upper floors.

The tree at its centre is an ahuehuete – a type of cypress tree that is common in Mexico.

Living spaces occupy all three blocks on the main ground floor, the same level as the garden.

This allows for a variety of spaces, including three different dining areas and a spacious lounge.

A couple of these rooms open out to patio decks.

Similarly, bedrooms on the two floors above feature triangular balconies, and there is also a roof terrace on the shorter of the three blocks.

There are few staircases in the 900-square-metre building, so corridors were created to link the blocks on every floor.

“Connections are born among the three concrete blocks, materialised by slabs, stairs, bridges and corridors,” said the architects.

“These transparent connections allow wandering through the three interior volumes in a continuous and intense relationship with the exterior, blurring the limits between both,” they added.

“The natural light bathes the interior spaces through large windows and, at certain times, with soft gestures.”

Based in Mexico City, Taller Hector Barroso is led by architect Héctor Barroso Riba. Other projects by the studio include a courtyard house in the city’s Santa Fe neighbourhood and a concrete residence in the Valle de Bravo region.

Photography is by Moritz Bernoully and Rafael Gamo.