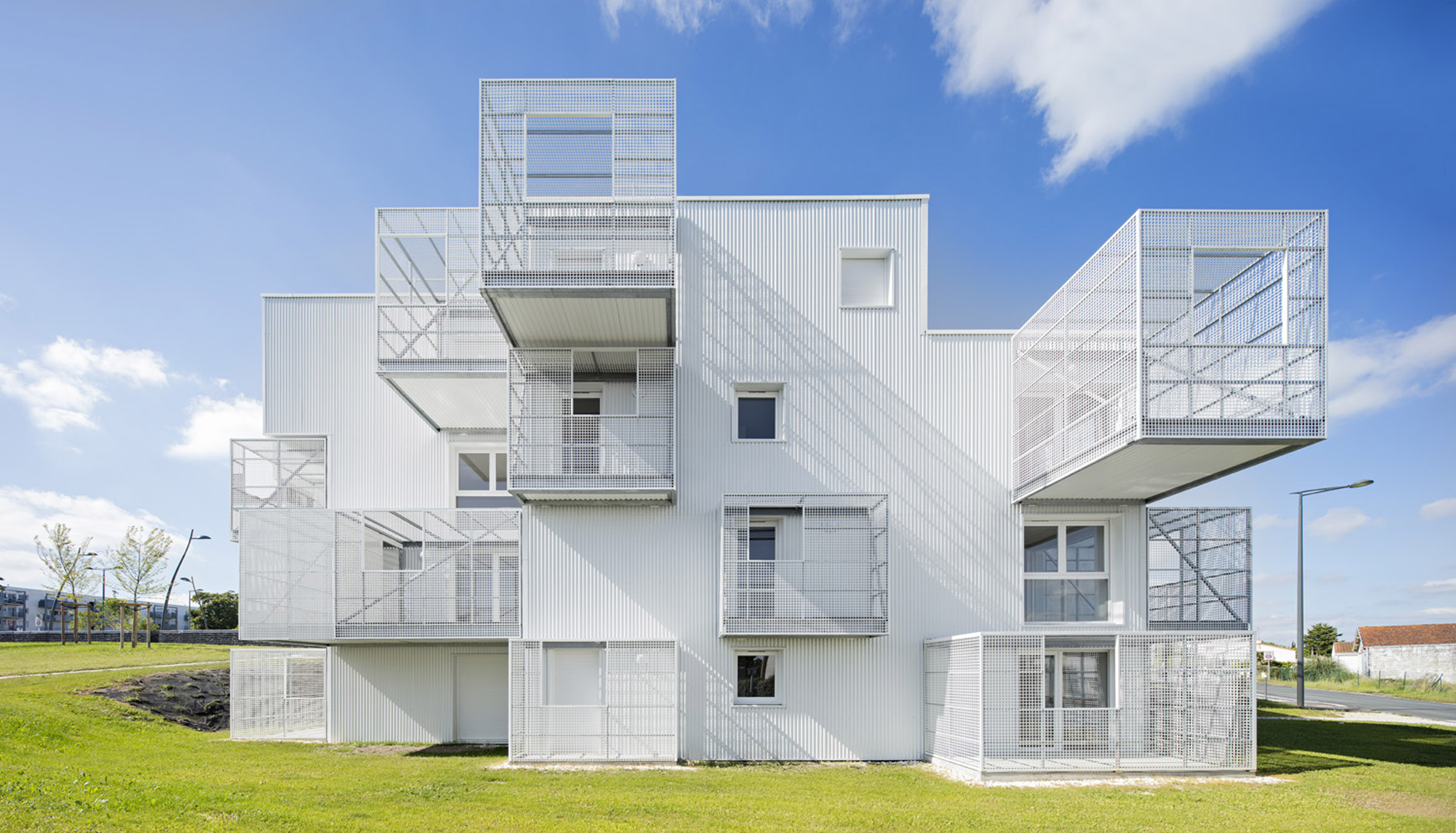 White caged balconies project from the sides of this social housing block by French collective Poggi + More, making it look like a series of irregularly stacked boxes.

Bordeaux-based More Architecture and Poggi Architecture teamed up to design the 1,886-square-metre scheme named White Clouds, which provides 30 apartments for the town of Saintes in western France.

Working together as Poggi + More, the architects devised a scheme aiming to maximise outdoor space through a series of gridded metal balconies.

“The building is positioned in such a way as to respect the site’s quality, rather than merely colonise the given space,” said the architects. “The little boxes project outwards, embracing the most interesting vistas.”

Caged balconies are “grafted” onto all sides the block, ensuring there is no primary facade. Their size and placement corresponds with the need of each individual apartment, which are contained within three white, corrugated metal blocks.

“Exit conventional balconies, terraces and loggias with their separating walls and shields of varying transparency, used to hide unsightly objects or provide a modicum of intimacy,” said the architects.

“In this design, the outside spaces are extremely secluded and provide genuine additional spaces, equipped with utility rooms for drying washing or storing bulky objects, just like garden sheds,” they continued.

“The apartments flow out into these exterior facilities, thereby offering ample extra space.”

“These ‘additional rooms’ are the design’s main distinguishing feature, and endow each apartment with some of the qualities inherent to detached homes.”

The apartment blocks are set partially into a landscape slope. They are bound on either sides by existing houses, footpaths and roads.

“A sense of depth has been created, structured by footpaths and enticing visual perspectives, with the landscape slipping effortlessly in and around the architectural volumes, offering multiple orientations for the apartments, all of which are secluded, standing well back from the road and enjoying open vistas over the surrounding spaces,” said Poggi + More.

“The harmonious association of setting and architecture makes way for a design which, rather than closing in on itself and looking inwards, opens out to embrace the neighbourhood as a whole while still providing protection from direct line of sight and noise thanks to its perforated cladding,” added the studio.

Another social housing block designed to take advantage of its views is Antonini Darmon’s Arches Boulogne scheme, which is surrounded by arch-fronted balconies.

Photography is by Javier Sevillas Callejas.