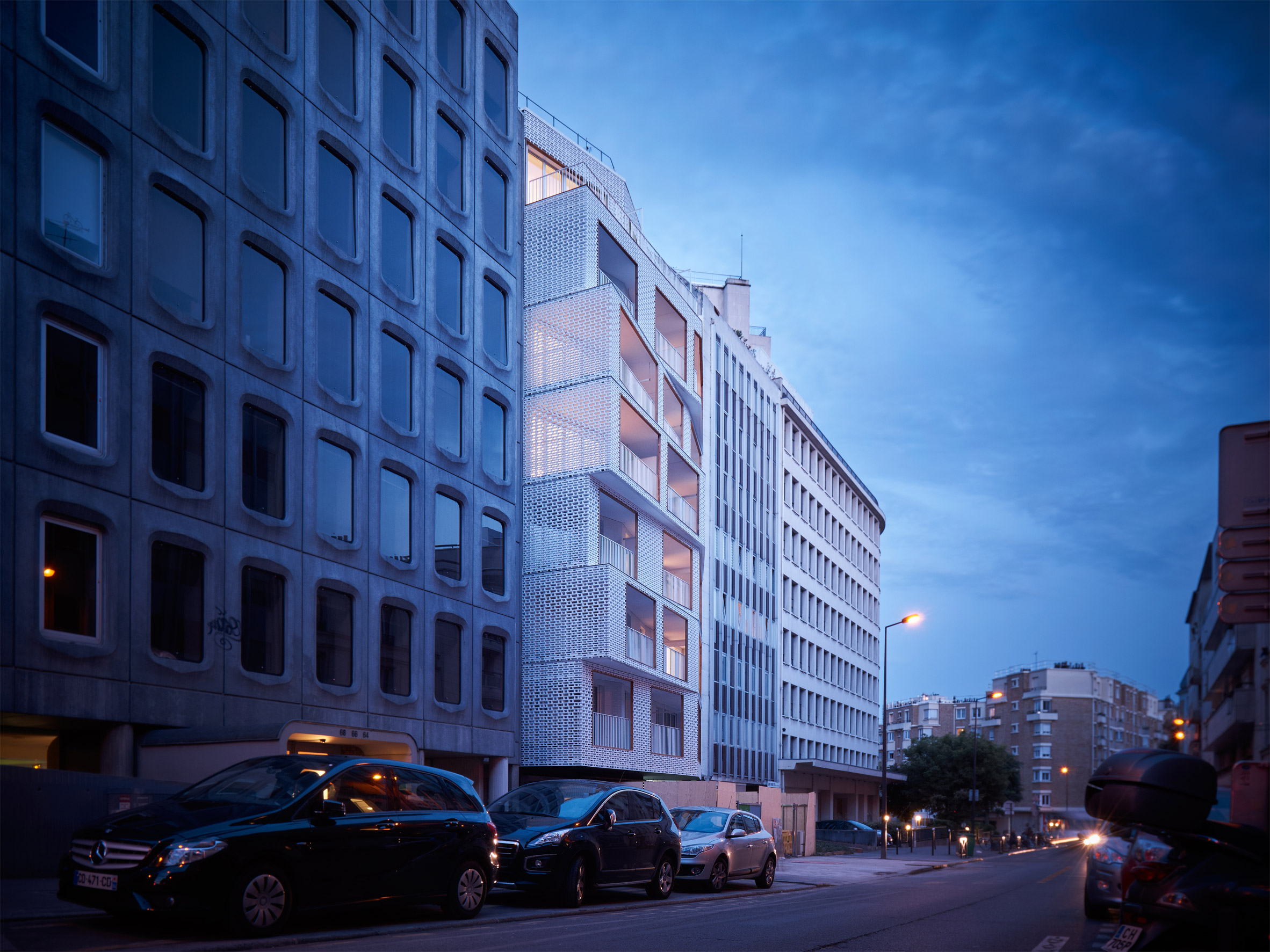 Angular balconies extending from the front of this apartment block in Paris are framed by white concrete screens featuring a perforated pattern that resembles brickwork.

Local firm Odile Guzy Architectes designed the complex of 28 dwellings for a plot in the French capital’s 13th arrondissement.

The long and narrow site is located in a densely built neighbourhood and is flanked by office buildings.

An eight-storey block set at the front of the plot complements the scale of the adjacent offices, while towards the rear a cluster of smaller townhouses are arranged around a courtyard.

The main block contains 19 apartments and is separated from the street by a compact garden. Its facade folds in and out to form an irregular surface that contrasts with the rigid geometry of its neighbours.

“These balconies are orientated southwest and overlook the street, they offer various framed views and direction whilst also providing sun protection during the summer months,” they added.

Each balcony is wrapped in a perforated skin made from fibre-reinforced concrete, which allows the apartments to receive plenty of natural light and views while ensuring some privacy for the occupants.

The modular concrete panels form a mesh-like surface with a pattern that recalls the appearance of bricks laid in a traditional Flemish bond structure.

Glazed doors open from the living areas onto the decked balconies, which also feature timber-framed apertures lined with white-painted balustrades.

A wide passageway leading through from the front garden towards the rear of the building frames a view of the planted courtyard.

Communal facilities including a rubbish collection point and bicycle storage are accommodated in the base of the apartment block, along with the main entrance to these residences.

The courtyard is lined with four- and five-storey units that overlook planting beds on either side of a path leading to the furthest properties.

These buildings are clad with horizontal spruce battens that extend along one side of the access passage to provide a sense of continuity between the front and rear of the complex.

In addition to the courtyard garden, a communal roof terrace can be accessed by ascending a flight of external metal stairs.

“The inhabited garden emphasises individual scale and access,” said the architects. “Fragmented volumes, house-like buildings, patios and external staircases emerge from the vegetation and its landscape.”

Two of the properties at the rear of the plot have private patios, while the rear windows of the apartments overlook the greenery of the courtyard.

The use of wood for the houses provides a contrast to the rendered facade of the apartment block. The spruce will take on a silver hue as it ages, complementing the gold-coloured window frames.

Photography is by David Foessel.