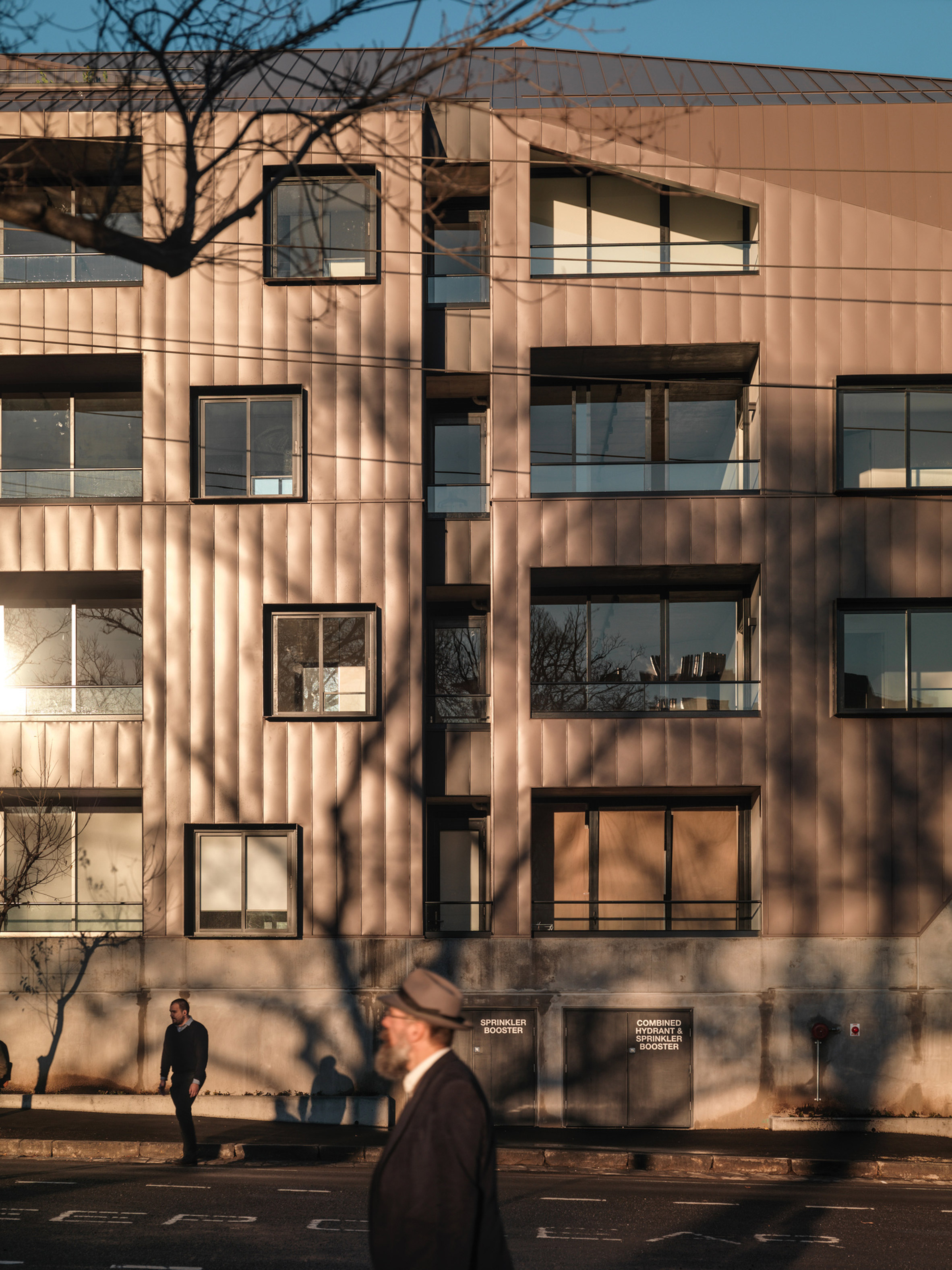 Balconies and windows with deep black frames project from these zinc-clad apartment blocks in Melbourne, designed by Woods Bagot to reference the area’s industrial architecture.

The Assembly Apartments are situated in northern Melbourne, in an area with an industrial heritage evidenced by the high number of factory buildings.

Local practice Woods Bagot, who designed the 137 apartments for the high-end developer Cbus Property, sought to evoke the materiality and distinctive saw-toothed roofs of these neighbouring warehouses.

Angular concrete forms are paired with raised-seam metal cladding, which has varying hues to reduce the visual mass of the four-storey buildings.

“Through the crafting of raw, earthen materials, the individuality of each building is expressed via the use of metal and zinc cladding, producing a light-industrial aesthetic with a strong contemporary edge,” said studio principal Peter Miglis.

The development occupies an entire block at the intersection of two roads. To mitigate its overall mass, the block is carved up to accommodate four separate buildings arranged around a central courtyard.

“With this development we were able to divide the built form to create a more human scale environment, focused on community and a connection to nature,” said Miglis.

The cluster of buildings is separated by pedestrianised lanes similar to the narrow alleys that thread their way through central Melbourne, creating “a village-like environment”.

Each lane is lined with planted beds and is overlooked by the balconies of the apartments above. The passages lead towards the courtyard, which draws daylight into the heart of the complex.

“Intimacy and privacy is often ignored in typical apartment projects,” said Miglis. “By carving up the mass, the design encourages good cross ventilation as well as abundant natural light.”

“Carefully considered elements and details were brought together; from the walls, cladding and window reveals to the ceilings, the design provides a sensitive human scale for residential living.”

Inside the apartments, the simple, industrial look is continued through the use of a pared-back material palette of exposed concrete and timber.

The living spaces and kitchens are demarcated by a slight shift in ceiling height, while similar materials to those used in the living areas extend onto the balconies to create a seamless transition from inside to outside.

Woods Bagot recently designed its own offices to promote collaborative working and socialising by including amphitheatre-like seating and meeting areas screened behind curtains made from hanging chains.

The firm’s other projects include a tower clad in golden louvres at a university in Melbourne and the conversion of a 1960s Modernist office in Hawaii into a sales suite for a residential development.

Photography is by Trevor Mein.