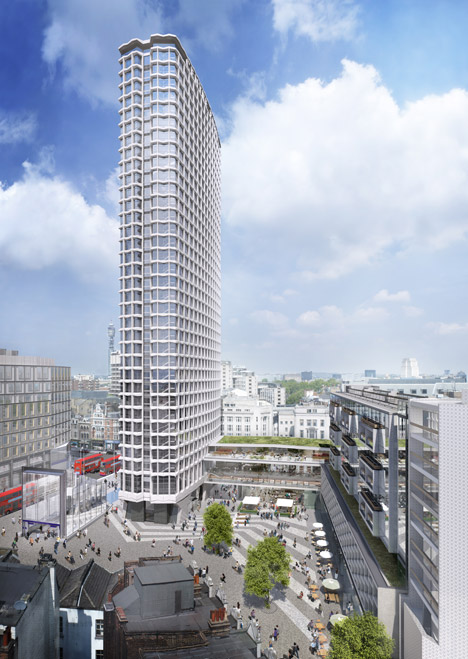 News: construction is now under way on a public square underneath Richard Seifert’s iconic Centre Point tower in London, as part of a major redevelopment by Rick Mather Architects and Conran & Partners (+ movie).
Described by the designers as “the key piece in the jigsaw”, the new pedestrian plaza will surround the base of the 117-metre-high building that was completed by influential British architect Seifert in 1966, at the junction between Oxford Street and Tottenham Court Road.

The square will be surrounded by shops and cafes, and will also integrate an entrance to Tottenham Court Road station, which has been undergoing a major redevelopment as part of the new Crossrail train network.

“It’s the key piece in the jigsaw: a major new square for central London, a destination at the eastern end of Oxford Street and with improved connections to Covent Garden, The British Museum, Tottenham Court and Charing Cross Roads,” said Gavin Miller of Rick Mather Architects, who is leading the design team.

“Given its size and presence, Centre Point is the natural focal point of the new square, and we have worked carefully with the building to address this new public space.”
The building, one of London’s first skyscrapers, was designed by Seifert for property tycoon Harry Hyams. Its distinctive modular facade comprises segments of precast concrete that were produced using crushed Portland Stone.
“Our task has been to marry the spirit of the building, with the equally vibrant and creative spirit of London today,” added Tim Bower-Ridger of Conran & Partners.

“By addressing the way the tower meets the ground, it will now be able to fully engage with its context within the cultural heart of this world city.”
Led by developer Almacantar, the project involves a full refurbishment of the Grade II listed Centre Point tower, creating 82 apartments and 13 affordable homes, alongside pool, spa and fitness facilities.
The development takes places in close partnership with the £1 billion transformation of Tottenham Court Road Station – a scheme that has proved controversial as it involved the demolition of buildings on Dean Street, Diadem Court, Great Chapel Street and Oxford Street.

Soho music venue the Astoria has already been razed, while campaign groups from St Giles Church and conservation groups the 20th Century Society and the Bloomsbury Conservation Area Advisory Committee have been fighting to save the Intrepid Fox – a historic rock music pub – from the bulldozers.
“Centre Point is now the focus of Crossrail, which will trigger an explosion in visitor numbers to this part of the West End,” said Kathrin Hersel, development director for Almacantar.
“We will give a much needed new lease of life to the area and turn Centre Point into a destination Londoners can be proud of, and providing a lasting legacy. We are delighted that Camden Council, English Heritage, Transport for London and Crossrail Ltd have come together to forge a future for Centre Point and the surrounding area.”

Since launching in 2010, Almacantar has also purchased several other central London properties, including Marble Arch Tower, CAA House and 125 Shaftesbury Avenue.
While construction is underway at Centre Point, the building will be wrapped in a patterned artwork by fashion and design studio Eley Kishimoto, which will take six months to erect and a further six months to take down. Work is expected to complete in 2017.
The post Work starts on public plaza beneath Richard Seifert’s Centre Point appeared first on Dezeen.